danelle Posted in Kids — No Comments ↓ 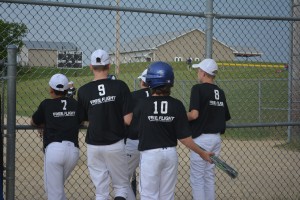 Devin’s baseball season is over and I’m sad. I look forward to attending his games. This past season, I wanted to hold a sign that said “My heart belongs to #10!” Except that Devin is 12 and a half — and I’m pretty much the most embarrassing thing that ever happened to him these days… with all my “Mom” cheering and encouragement and hugs and telling him I love him. Not that he doesn’t like my encouragement — he does — but in front of his teammates is too embarrassing. I guess it’s a phase. Sigh.

So I watch intently, try not to cheer too loudly, try not to give him tips on how to swing his bat — even though I KNOW how to bat and I JUST want to help — and try to blend in with everyone else (I’ve been informed that standing behind the backstop to make sure the strikes and balls are in accordance with my personal strike zone does not qualify as “blending in”).

I really do enjoy watching his games. So much so that I may have told a teeny tiny fib in order to be able to watch.

Lainey, Devin’s two year-old sister, had a habit of running toward the road next to the field during games (which meant I would spend the game chasing her down instead of watching Devin play)… so Lainey got the idea — no speculation on where she got it, please — that monsters lived in the tall grass between the baseball field and the road. It worked well for a while… game after game, Lainey played vigilante… pacing up and down the line of tall grass, scanning for monsters, telling the fans, “Shhhh!… Monsters sleeping!” If any monster dared climb out of that grass, Lainey would be on him….can’t blame the monsters for not coming out. Lainey is intimidating. I know… 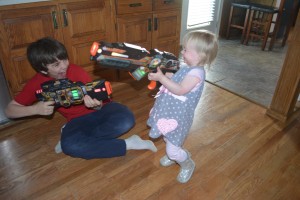 Nary a monster was spotted on Lainey’s watch, I could pay attention to Devin’s baseball games, and all was right with the world.

Then one day, baby Tristan crawled toward the grass. Shrieks suddenly erupted from Lainey. “Tristy! NO! Monsters! No, Tristy! Stop! STOP! MONSTERS, TRISTY!” She was in disbelief that her baby brother would continue to crawl toward the “monsters”, despite her warnings, and was becoming hysterical. She shifted her focus from warning Tristan to menacing the monsters… “Monsters! GO AWAY! Not get Tristy! Monsters! Bye! No monsters! Bad! Not get Tristy!”

Every parent watching the baseball game was now turning to see why my daughter was screaming furiously at invisible monsters. I ran to rescue Tristan and Lainey from the “monsters” and hoped Devin wouldn’t notice his Mom not blending in yet again. Fortunately, Devin has a wonderful sense of humor, and got a kick out of his sister running around the spectator area yelling at “monsters” as I ran around after her. By this time, Tristan had found something much more entertaining to watch than the tall grass he wanted to crawl into (I’ll give you three guesses and the first two don’t count).

The good news is that Lainey likes to boss her brothers, but she’s ALSO willing to take on every “monster” in the ballpark to defend the smallest of her siblings. So much for his family staying incognito at Devin’s baseball games… but must be raising this girl right 😉

End note: My heart still belongs to #10, and I don’t want to miss a minute of any of his games; however, I’ve since told Lainey that it’s Cookie Monster that lives in the tall grass… and she’s more interested in meeting HIM than in beating him up.

Mess with me… mess with my siblings 😉 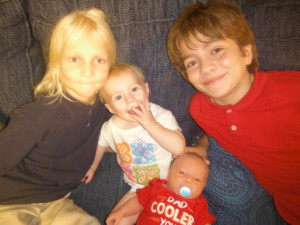 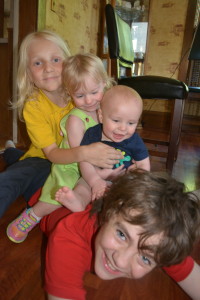