I haven’t owned a bicycle since I was 11 years old. I always wanted to inline skate instead of bike, and kept up with my biking family just fine on my rollerblades. When my kids started biking, I chose to run beside them rather than ride a bike of my own. I wanted the strenuous cardio workout and the runner’s high that went with it. I still want the strenuous cardio workout… however, someone hit my car during my last pregnancy and it’s left me in chronic pain… so — 20 years after owning my last bicycle, I’m putting away my inline skates and running shoes (temporarily, I hope) and trusting that biking will be a less painful way to exercise while I continue trying to heal.

Naturally, the first step in this new plan was a trip to the bike shop. My husband, who also didn’t own a bike for many years, recently got a mountain bike and baby trailer to pull our two youngest children around in. Our eventual goal is to live in the Rocky Mountains of Colorado (though we’re in relatively flat Iowa at the moment) so I wanted a mountain bike as well.

I had picked out two mountain bikes that were really comfortable, and — as a bonus — they each had some type of blue (my favorite color) on them. The bicycle salesmen had a different idea about what kind of bike I should purchase, though. He led me away from the mountain bikes and over to the road bikes and hybrids. Then he told me that I would want something more efficient and easier to pedal than a mountain bike.

Huh? The whole point of this bike would be to get a workout. Why would I want an easier to pedal bike? Another minute of conversation revealed he had decided that, because of the size difference between my husband and I… 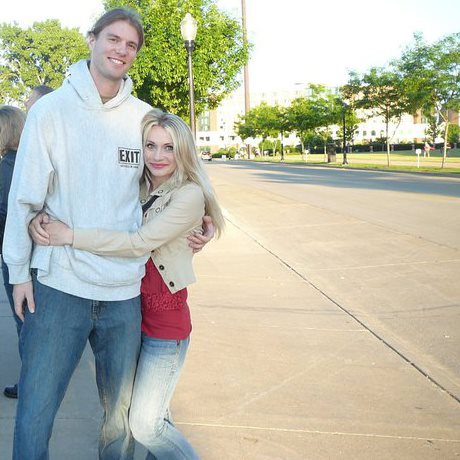 …I wouldn’t be able to keep up with him… as he biked while pulling a trailer carrying two children in it.

Telling the salesman that I would be fine on a mountain bike, I turned away from the road bike he held out to me. He responded by telling me that my husband would have to repeatedly slow down to wait for me and biking just wouldn’t be as much fun for him… he again steered me toward what he called the “more efficient” bikes. I did not want a road or hybrid bike. I wanted a mountain bike. The salesman continued to tell me that I wouldn’t keep up with my husband if I got a mountain bike (and yes, the salesman knew my husband was pulling a trailer with two kids in it).

I know the salesman thought he was helping and that my petite frame could never keep up with my 6’4″ husband (he was wrong). It’s not that my husband isn’t athletic. He’s very athletic. But I’m very athletic, too. Defending my athleticism in order to be deemed worthy to purchase a mountain bike was trying my patience!

(My husband was on the other side of the store chasing our toddler daughter while this was going on, so he didn’t hear my ‘I can kick my husband’s butt’ remark. I think he gets an email every time I post something on my blog, though. Sorry, honey! I had to defend my athletic honor. I admit you can kick my butt at football and basketball!)

No Doubt started playing in my head…

‘Cause I’m just a girl, little ‘ol me

Don’t let me out of your sight

I’m just a girl, all pretty and petite

So don’t let me have any rights

I ignored the salesman’s recommendation and got the bike I wanted. I’m really happy with it. Except I’ve got to slow down to wait for my husband all the time, which makes biking just not as fun of an experience for me — just kidding!!! We ride side by side on the bike path with him pulling the trailer. (Although, the first day, I did indignantly peddle as furiously as I could and got way ahead. Had to show that bicycle salesman who was not there! This time Rihanna’s Shut Up and Drive was playing in my head. I was very tired afterward, and most people would wonder why I needed to show a person who was not there that I could do it. It makes sense in my head.)

It’s been a week since we were at the bike shop, and we’ve been taking a bike ride together with our kids every afternoon. I miss running and skating, but I have to admit, biking is a really nice way to exercise and spend time with your significant other!