↓ Skip to Main Content
Home › 2 › You’re Not Gonna Find Yourself a Cheerleader. If You’re Looking for One, You’re Part of the Problem!

You’re Not Gonna Find Yourself a Cheerleader. If You’re Looking for One, You’re Part of the Problem!

I HATE the cheerleader song. Absolutely loathe and HATE IT. If you haven’t heard this song on the radio, here’s a sample of the lyrics:

She walks like a model
She grants my wishes
Like a genie in a bottle
Yeah, yeah
‘Cause I’m the wizard of love
And I got the magic wand
All these other girls are tempting
But I’m empty when you’re gone”

It’s an entire song about an entitled, self serving man being so happy he found a woman who will cater to his needs. GAHHHHHHHHHH!

After everything women have fought for in the past hundred years — after struggling against stereotypes, gender roles, and the idea that women were put on Earth solely to serve men; after fighting for the right to work and for equal pay; after fighting sexual harassment and domestic violence — someone writes a song like this. SMH.

I guess there will always be those who tell women, “Get back in your place!”

Um, wait. What are you talking about?! You yourself are a stay at home wife and mother!

Why, yes — I am.  And I thank all the women who fought for equality, so I may choose the path I feel best serves my own family at this time, instead of being forced into whatever place I’m told to serve in; later, I may choose a different calling. Freedom is so nice!

Anyway, back to the song. I’ve been going on sort of a rampage about this song. It began to play on the radio in the car one day, and my nine year-old started singing along, then announced, “I love this song!” (Normally, I switch the station if that song comes on — swear words and everything else on the radio be damned, but when a song encouraging young women to be cheerleaders so they please men comes on, the station is getting changed — but I must have been distracted and not noticed what song was playing.)

Whoa, whoa, whoa! Now we needed to have a conversation. “Wesley,” I said patiently. “Would you like to sit on the sidelines and never do or play anything yourself and just cheer someone else on? Would that be fun?”

“No. That would suck,” he replied.

“Okay. Then please do not ever expect any girl or woman to just sit around and cheer you on and never do anything herself.”

You see, my problem isn’t with the idea of servitude or encouraging your partner. Men and women are called to mutual servitude in relationships, and without mutual service and sacrifice, most relationships and families are probably going nowhere good. My problem is when it’s 100% put on the woman to serve and sacrifice all, to make the man happy — as he serves himself, too. Ergo, my dislike for the song. The singer talks about being tempted to cheat on the woman, but he decides not to because his woman serves him so well. What a gallant fellow. And what a horrible message for women! Do we really want women who’ve been cheated on to think that if they were just better wives or girlfriends who served their man more diligently, he wouldn’t have cheated on them??? Why can’t a guy sing a song about a woman who is really smart or who snowboards really well? I could get behind that song!

The idea that women should live to make men happy irregardless of how those men treat them is a troubling theme in our culture. Not to mention that what defines true manhood is the sacrificial assumption of responsibility. I don’t know where the idea that manhood means picking up, using, and tossing aside as many women as possible came from (Hugh Hefner maybe? Great role model!), for there is nothing of manhood to be found in walking that path.

I was at it again during dinner the other Friday night, explaining — to my older boys and their friends — everything that is wrong with the cheerleader song and why I really really hate it. I’m fairly confident — but not completely certain — their friends left the dinner table without thinking Devin and Wesley’s mom has some cuckoo conversations at her house. But maybe they did think that. I don’t know. I do know I haven’t scared any of their friends away yet, because they all seem to love coming back — and I’m happy to feed them so long as I can tell them which pop music songs are really messed up (and I grew up with Britney and Eminem for pop role models, so if I’m saying a song is messed up, considering what I grew up with– it’s messed up! That song about, “I don’t have money to pay my rent, but I’m gonna get up in this club and have a good time before my time is up…” No! You’re not! Because that’s totally irresponsible! So get your butt outta da’ club and go figure out how to pay your rent!!! Or tomorrow, when you wake up from your hangover, you’re gonna have even bigger problems. I may have told my kids’ and their friends my opinion of that song, too.)

This morning, a terrible thing happened. I may have failed as a mother. My daughter, as she ate her chocolate chip muffin for breakfast, informed me, “Mommy, I’m going to be a cheerleader!”

Okay. My daughter has not been indoctrinated into the culture of madness yet. She doesn’t know that boys generally aren’t cheerleaders, or even what a cheerleader is. She’s just been hearing the word cheerleader discussed too much at dinner, and so she thinks her and her dad are going to be ones.

Have you seen the movie Little Giants? It was popular when I was growing up. Becky “The Icebox” was an amazing football player, who had a crush on the quarterback. When the quarterback liked Debbie the ditz, Becky questioned whether or not she should change who she was for a boy. In the end, she decided to be herself, and led her football team to victory.

That’s MY daughter. Becky “The Icebox”. She will know to be true to herself. And her brothers will know that they should never expect a woman to be any less. (If my dinnertime pop song rantings have anything to do with it, anyway.) And yes, you can wear cute boots while you play football — she wouldn’t be like her mommy if she didn’t 😉 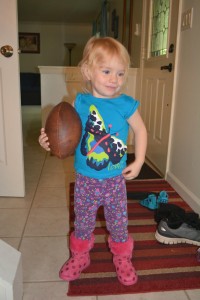 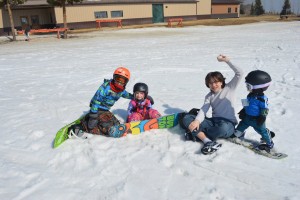 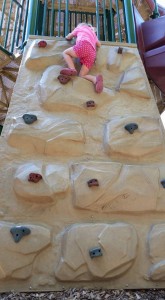 5 comments on “You’re Not Gonna Find Yourself a Cheerleader. If You’re Looking for One, You’re Part of the Problem!”