This is an update to my earlier post about being assaulted at Northstar in front of my 9 year-old.

I called the police the day of the assault (from the friend’s house we were staying at, not from the resort, as I had been threatened not to call police to the resort). I reached an answering service for the Placer County Sheriff and left a message about what happened. The next day was when I was able to speak with an actual officer who wrote up the police report.

Here is the police report number. It can be found on this website – http://www.crimemapping.com/map/CA/PlacerCounty

Northstar will not release the man’s name. Without it I can’t press criminal charges. I filed a police report. My attacker did not.

What did I say before the man threatened and assaulted me?

“Hey! You almost knocked my son off the pipe! You have to be careful… he’s only 9 and you could’ve hurt him really bad. You can’t ride like that.”

The man’s violent response both shocked and terrified me. He didn’t want anyone telling him anything. After he assaulted, threatened and grabbed me, I absolutely was yelling at him — to get off me and leave me alone! He wouldn’t.

I was assaulted on a Thursday afternoon on a very warm day… 57 degrees in South Lake Tahoe… the lift line was not crowded… there were very few people going through the maze, possibly 2 other people getting on the lift when the assault started and those people were already well past us… people were going through the maze intermittently, but it was overall pretty empty. The lift operator I speak of in my post was the lift operator in charge of the maze, not the one standing next to the chair to load people. It’s extremely telling that the only person who witnessed the entire thing from start to finish — a 9 year-old — who was saying over and over, “That guy screamed at me, almost ran into me, got on my mom, screamed at her and then punched her” was told by the security team that he cannot give a statement because he’s a minor.

There are several posts on Reddit about what happened. A group of users speaking extremely negatively of me… all of their user accounts were created that day. They’re fake accounts being used only to trash me on the internet. People have also messaged me saying they were banned from local groups after trying to advocate for me, and that Northstar and Vail Resorts are deleting every comment on their Fb pages about the assault. Some of the same profiles who are posting to Facebook are submitting the exact same comments repeatedly to my blog under different names. 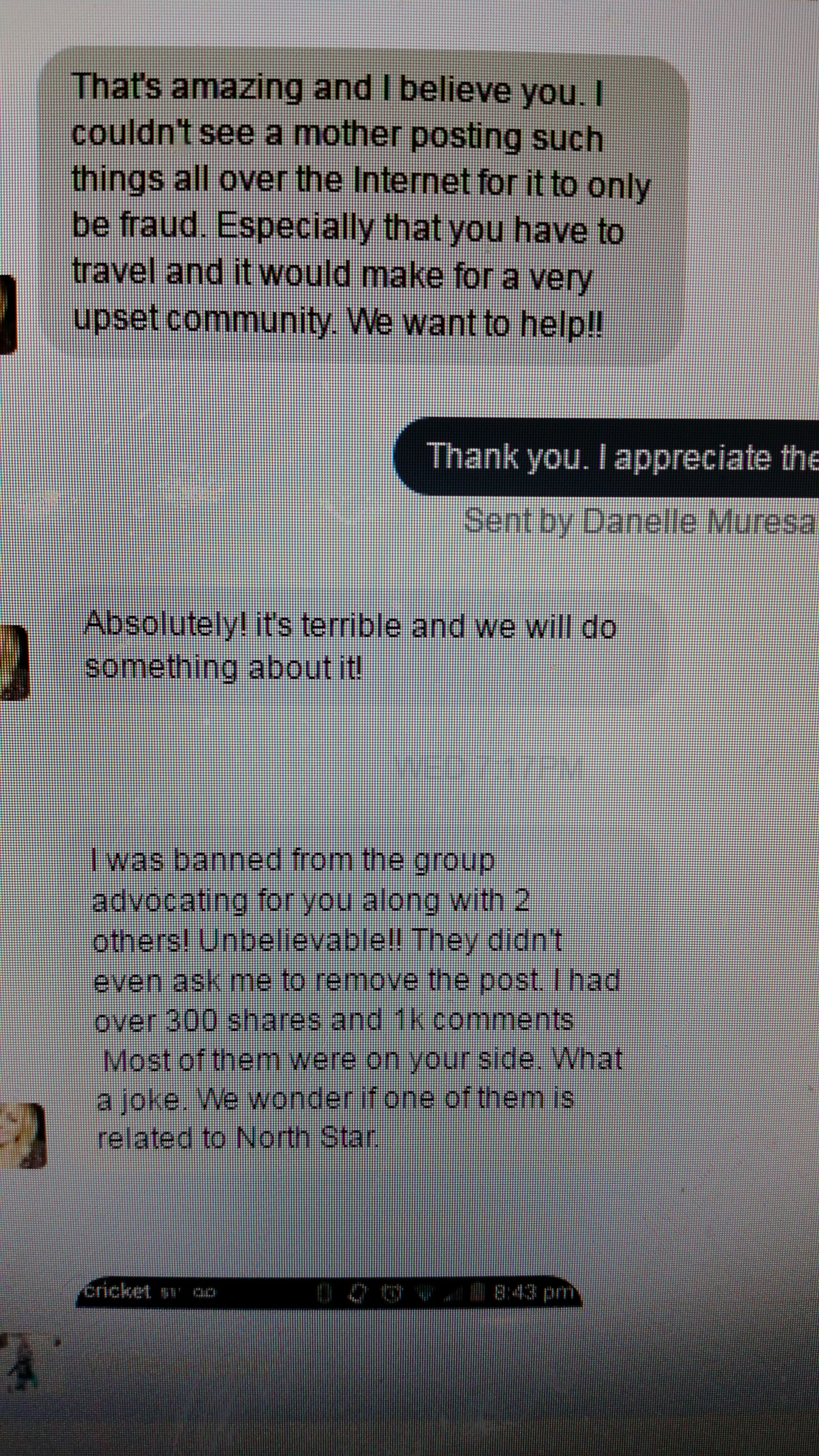 We were not on a fancy vacation. We were staying with friends (for free) to film and photograph Wes in demo jackets for one of his sponsors. I drove 26 hours from Iowa — much of it while Wes slept in the car — to get to Lake Tahoe.

This is not a publicity stunt. I’ve written this blog for a few years now… extended family and close friends read it to see what our family is up to. If you’ll notice, there’s not a single advertisement on my blog. I receive nothing for post clicks.

My son has been privileged with being a brand ambassador since he was 3 years old. His snowboarding has gotten him plenty of attention. Wes gains nothing from me speaking out about being assaulted. I tried for 3 and a half weeks to speak with Northstar and Vail about a resolution to all of this. I’m sharing what happened to us as a last resort. I’m standing up for myself and my son and saying it’s not right what happened.

I’m receiving communication now from friends of people supposedly involved and being threatened to stay out of the Tahoe area. This perfectly illustrates the violence and intimidation that this group of people believes is okay. This is what I’m standing up to. This is why I’m sharing what happened.

I’ve also received many supportive messages and for those I am very thankful. 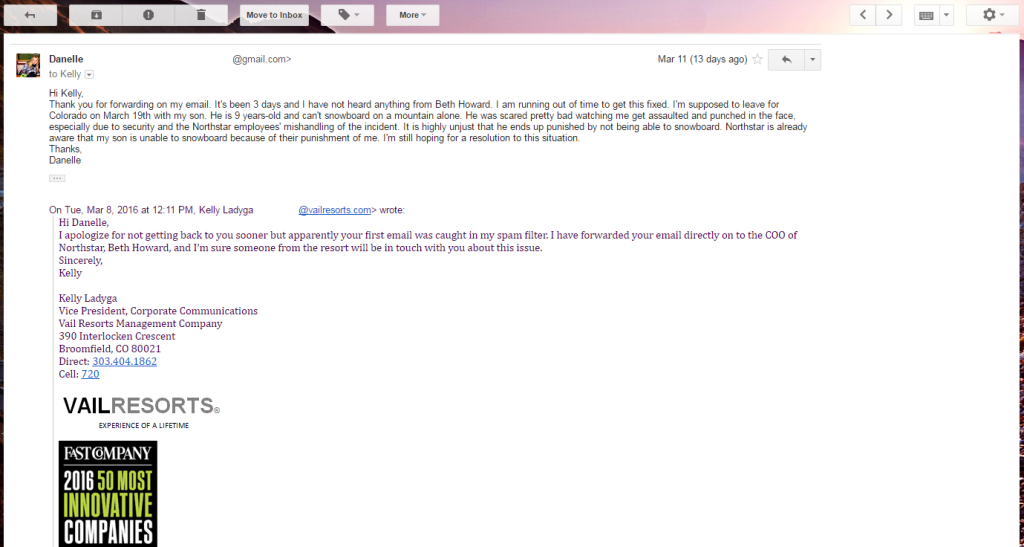 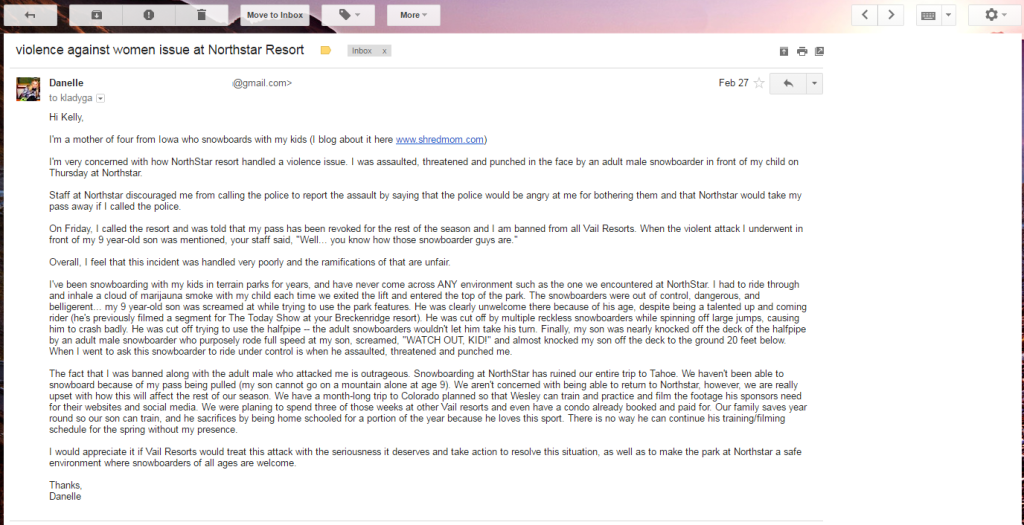 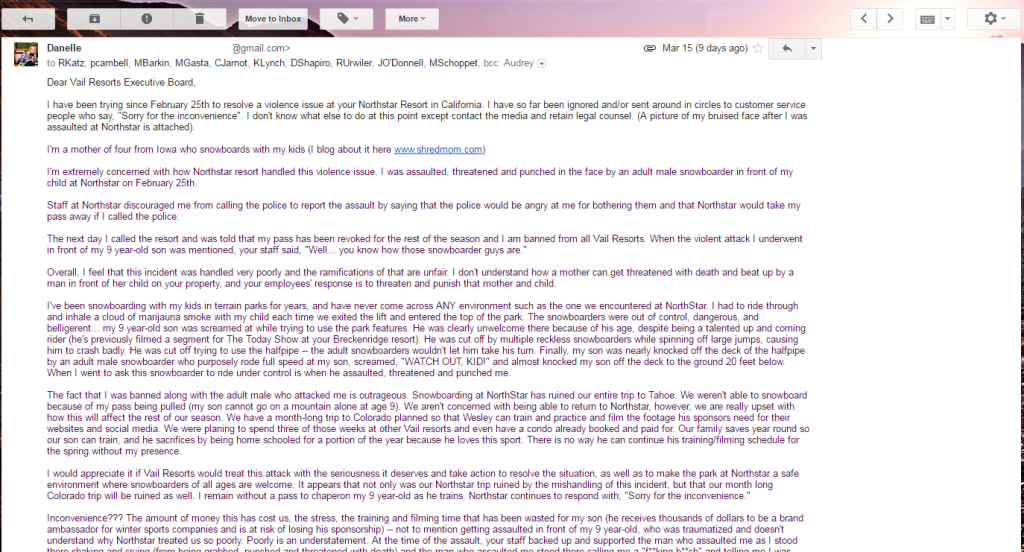 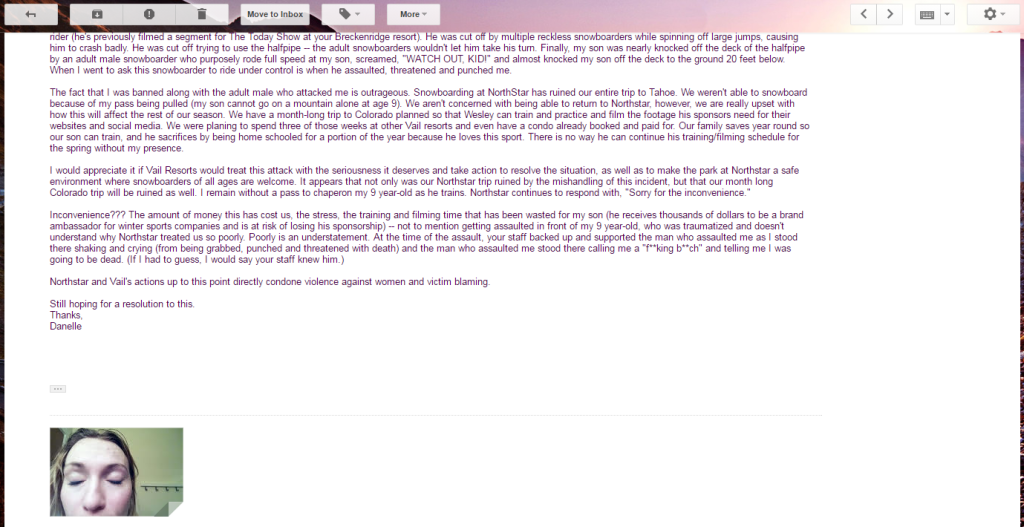