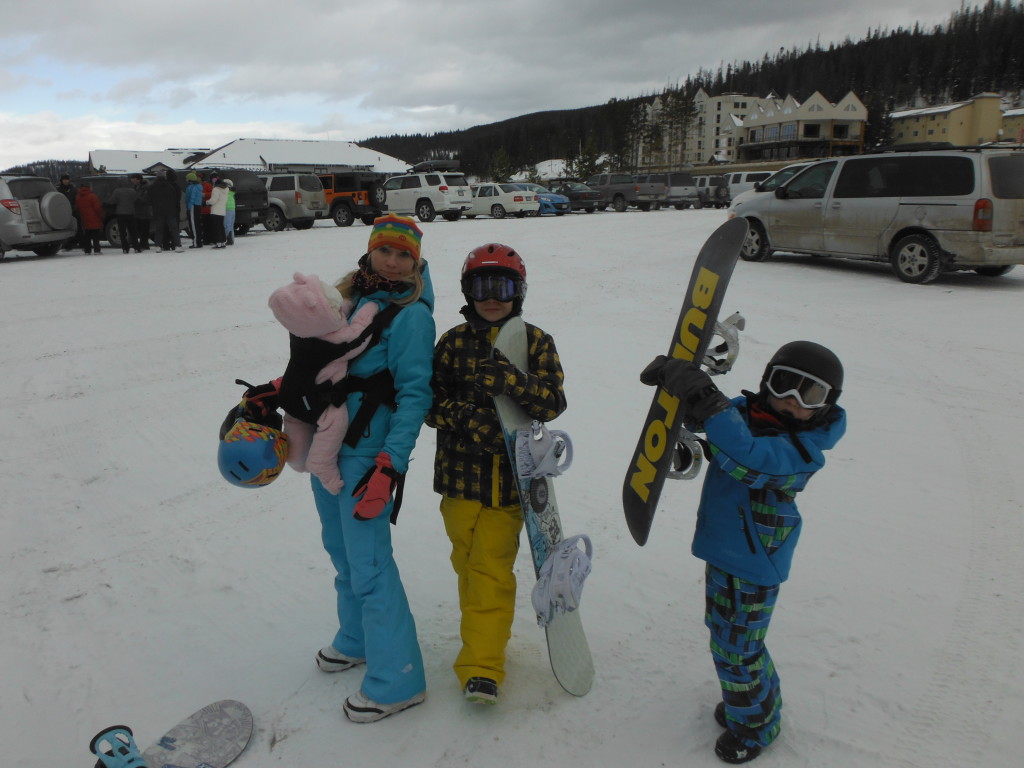 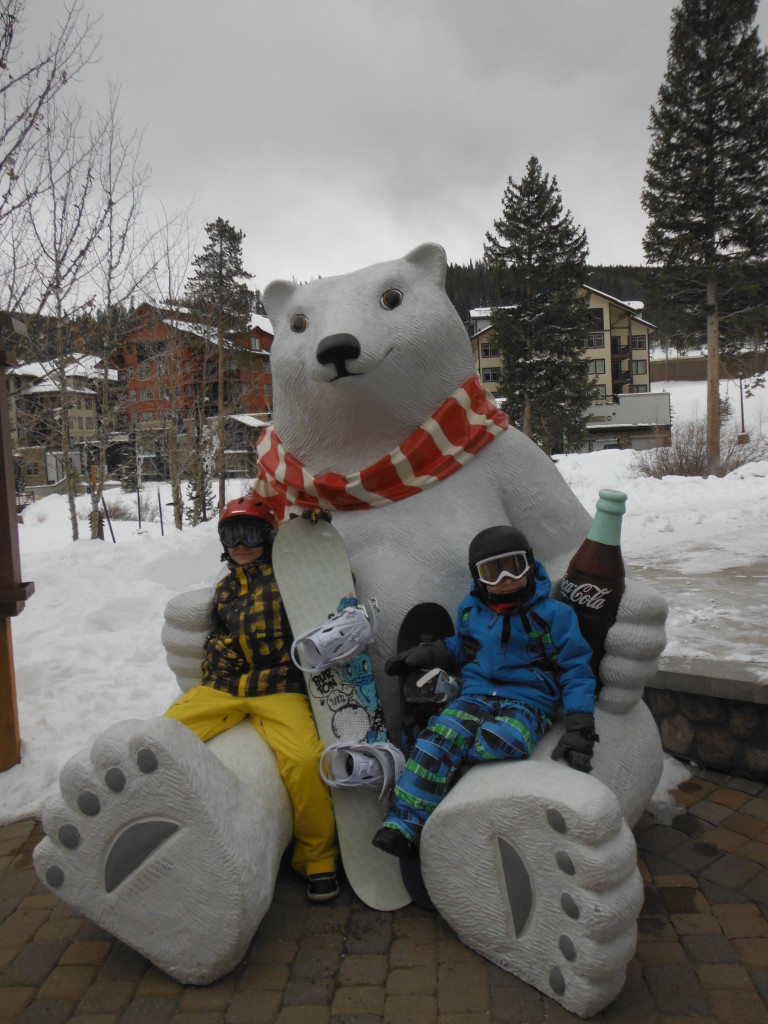 The five of us arrived in the mountains of Winter Park, Colorado, a few days before Christmas… after a VERY long drive across Iowa’s terribly icy roads, long boring Nebraska, and the flatter part of Colorado.  Lainey had a cold during the drive, and she was losing her voice.  Every time she tried to scream that she wanted out of her car seat, all that came out was a little squeak.  Chris said we should thank God for this. 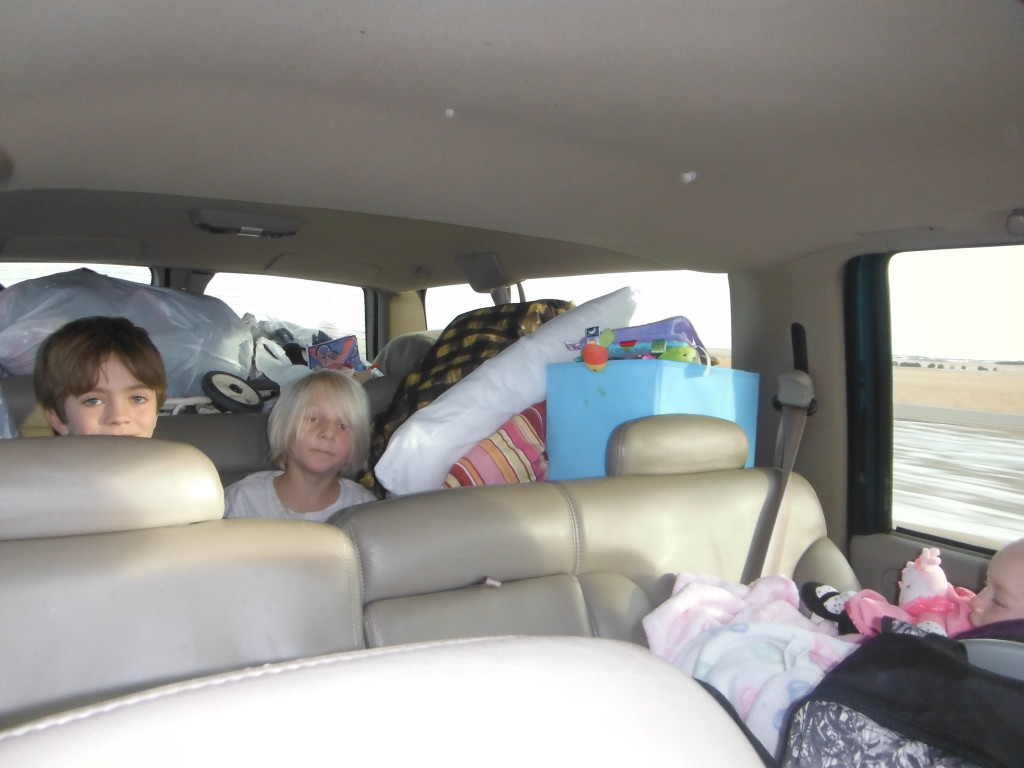 We were all happy when we arrived at the condo, but nobody was happier than Lainey… 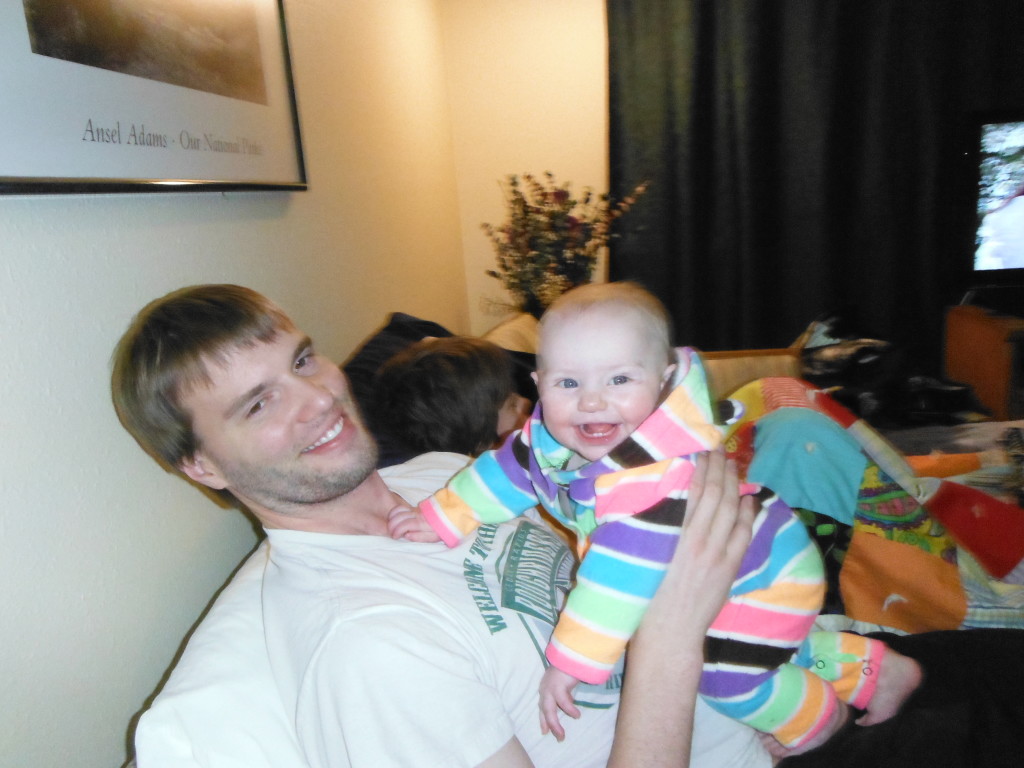 Somehow in the past year – while I was pregnant, and snowboarding slowly and carefully – Wesley got a lot faster and crazier on his snowboard.  While riding the chairlift, I commented to him that he is a maniac.  “I like to be a maniac,” he replied matter-of-factly (duh, Mom). 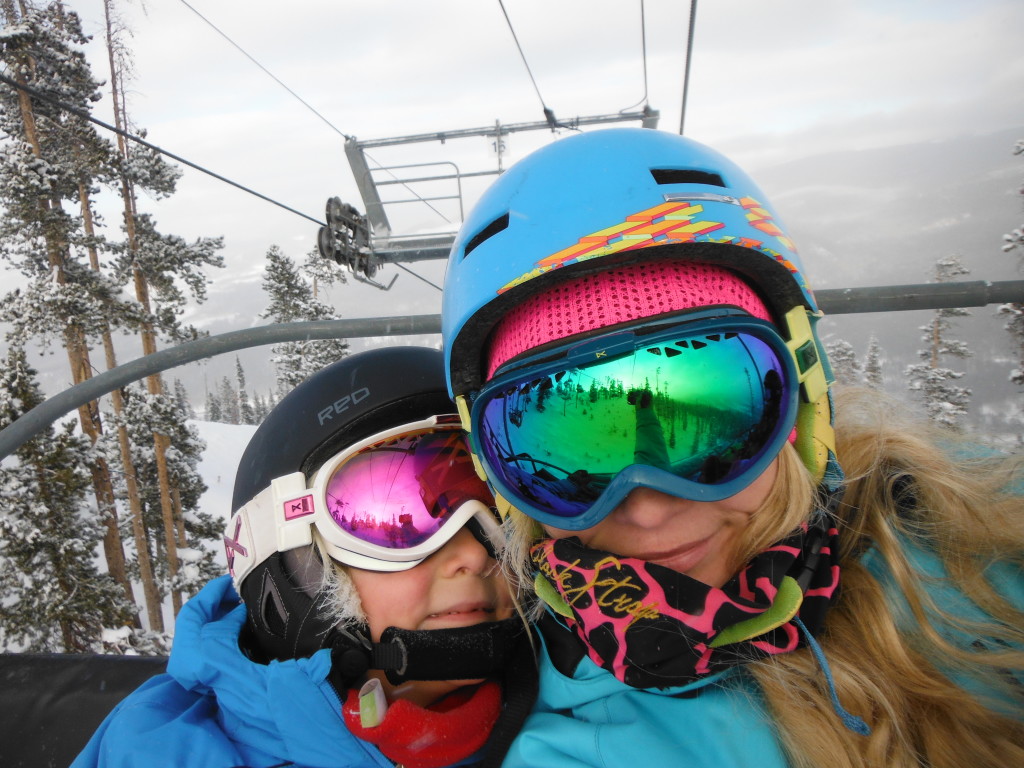 On our last run of the day, I slipped on some ice trying to keep up with the maniac, and – though I have taught many lessons on how to “fall like a snowboarder”* – I forgot how to do so myself.  My right wrist aches. 🙁  Luckily, I didn’t break it. 🙂  Wesley told me it was too bad I fell because I missed seeing his really cool spin jump… this WOULD be the worst thing about falling to Wesley, as he bounces off the ground and right back up almost every time he falls.  Oh, the indestructibility of youth (sigh).  Wesley and I left the resort and headed back to the condo, where we found Chris and Devin saving the world in Zelda.  We started to tell them about snowboarding, but they said not to distract them or they would die.  Sorry guys… didn’t mean to jeopardize such a dangerous mission…

Can you tell how much I like video games?  I have almost nothing to do with my kids’ video games… besides deciding which ones they are allowed to play, and taking them away as a consequence if they make poor choices.  The reason I say “almost nothing” instead of “nothing” is because I once agreed to play a Wii dancing game with Devin and Wesley.  I was shaking my six months pregnant belly to Beyonce and Shakira’s collaboration, “Beautiful Liar,” when I noticed Chris filming me. That was it.  Mom plays no video games anymore EVER.  I am still frequently asked to watch them play video games… I can’t bring myself to do this, either.  Really, I don’t even get the appeal of playing… but watching?  It’s just too boring.  A couple days ago, I caved on this one.  They wanted me to watch them play “Angry Birds.”  (There is a definite “Angry Birds” obsession in our family.  Chris even says our family could pass for a bunch of angry birds when we’re arguing.) 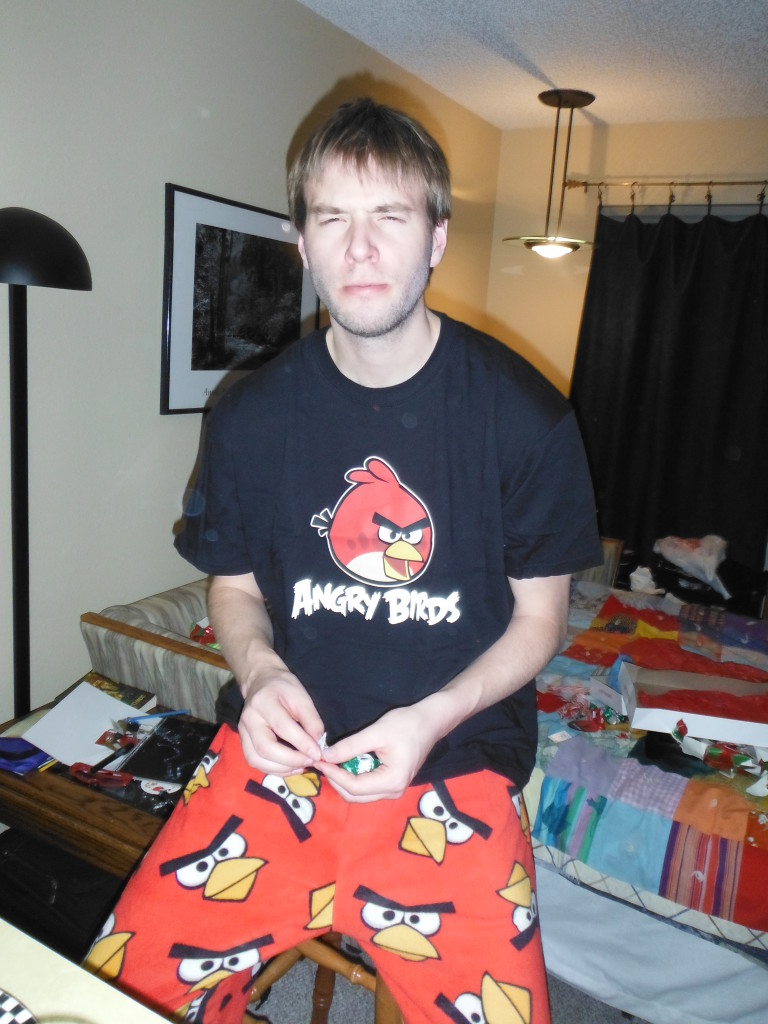 Chris, being an “Angry Bird.”

So I sat down to watch “Angry Birds”. I don’t get it.  It looks like the birds are a bunch of suicide bombers.  How is suicide bombing the pigs going to get the birds’ eggs back?  What is this game teaching my kids?  That payback is more important than a rescue mission?  I was sharing my thoughts out loud, when I was told that I was ruining it and could I just watch without having to make commentary?  I wonder if my kids were referring to the game or the rest of their lives…?

Christmas Eve, I told my family I would cook something nice for them for dinner.  They said no thanks, they would just have frozen pizza.  Oh well, I tried to be a good mom.  Chris and the boys all got Angry Birds gear (pajamas, gloves, etc.) for Christmas, so they of course had to break out the game. 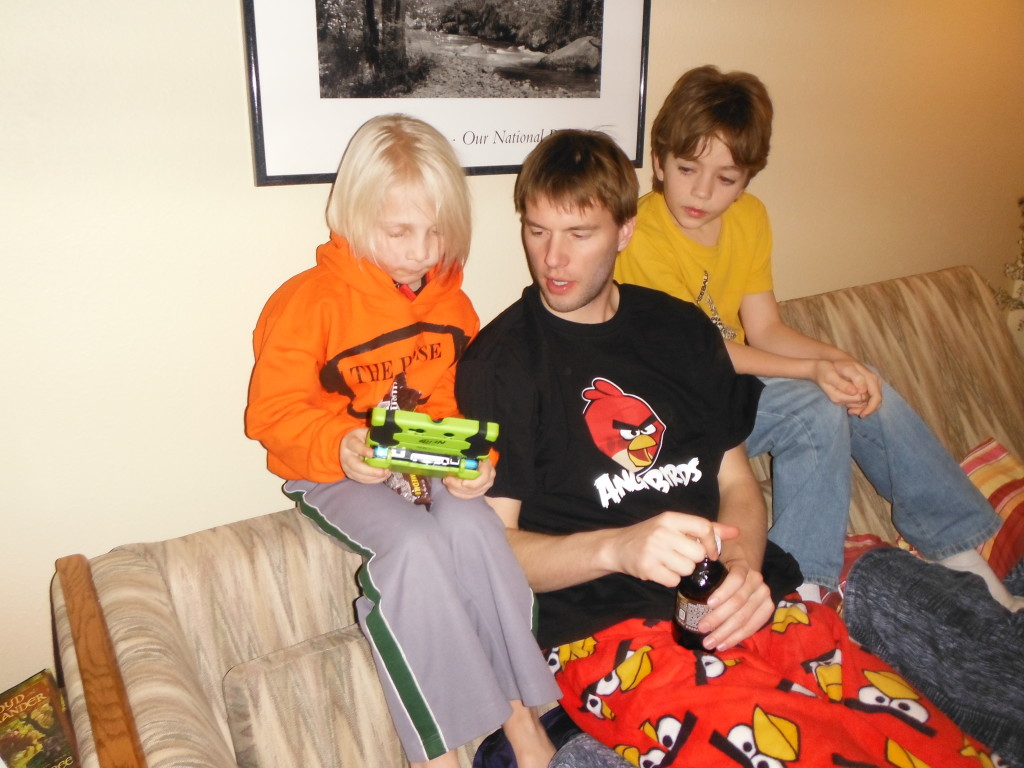 Devin was pulling a string on his new Angry Birds gloves.  “Devin, stop that!  You’re going to rip a hole in those!”  He looked at me like I was some kind of alien creature.  “Nevermind, you’ll probably lose them in a week,” I sighed (my kids have a real problem keeping track of their gloves… I imagine the school “Lost and Found” is fully stocked each year from our family alone). 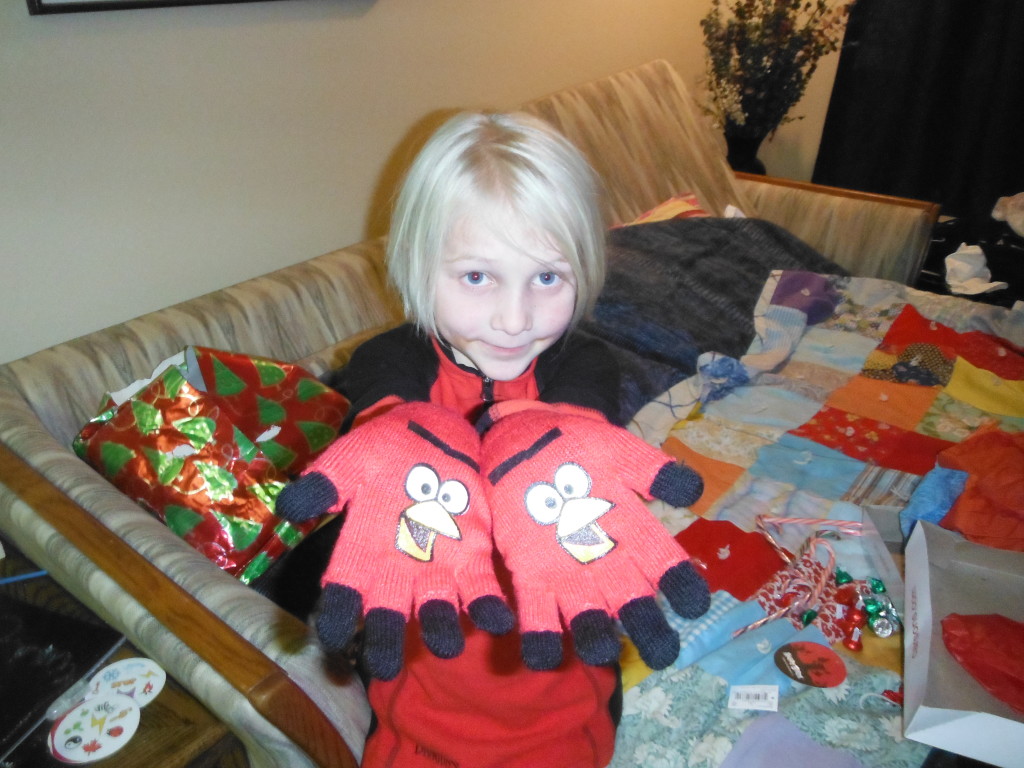 Speaking of losing things… Wesley lost his goggles on the first day here.  The only extra we have are my hot pink ones… so Wesley has been wearing hot pink goggles every day since.

Wesley rocking my hot pink goggles. His hair looked blonder than usual, until I realized it was covered in snow icicles.

While I drove to the resort, Devin complained that he didn’t want to snowboard that day… he just wanted to stay home and play Zelda… so of course I launched into my video game lecture… “You know, Devin… it’s really important to boys to have a mission in life, and when they play video games they feel like they are going on all of these missions, and accomplishing all of these things… when, in real life, they are not accomplishing anything at all.  This is why video games are a waste of time.  Right now, we are going to accomplish being active in the outdoors in REAL life, which is a REAL accomplishment.”  Devin gave me a look.  I had again morphed into an alien creature.  I decided to tease Wesley about his goggles, in the hope that having to wear hot pink goggles would encourage Wesley to keep better track of his equipment next time.  “Wesley, it’s okay… tough guys wear pink,”  I smiled.  “Right, Devin?” Normally, Devin loves teasing Wesley… but he was silent.  I guess I was receiving the silent treatment for committing the cardinal of all sins… insulting video games.  Now they were both giving me a look. Luckily, I’ve accepted that my title of “mom” is often synonymous with “alien creature.”

I’m happy to report, though, that sometimes, my kids really like me. 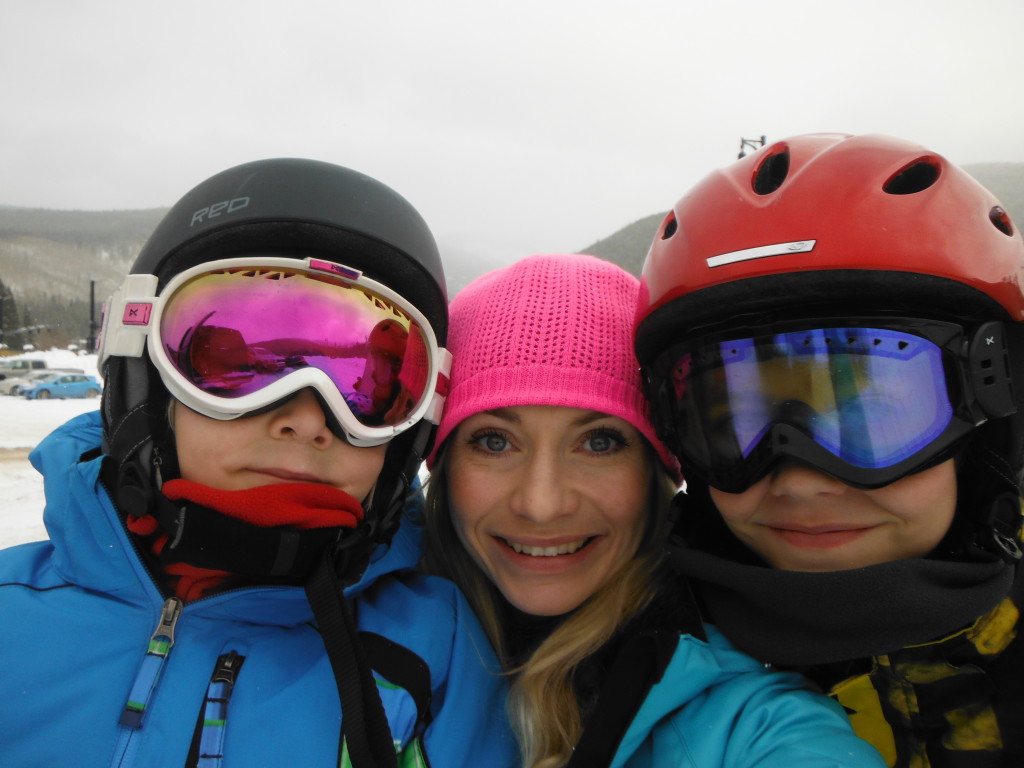 Yesterday, Devin and I went snowboarding by ourselves in the afternoon and he said he really loved spending time with just me, and that we should do stuff together by ourselves more often. It was a beautiful powder day and the snow just kept coming down. 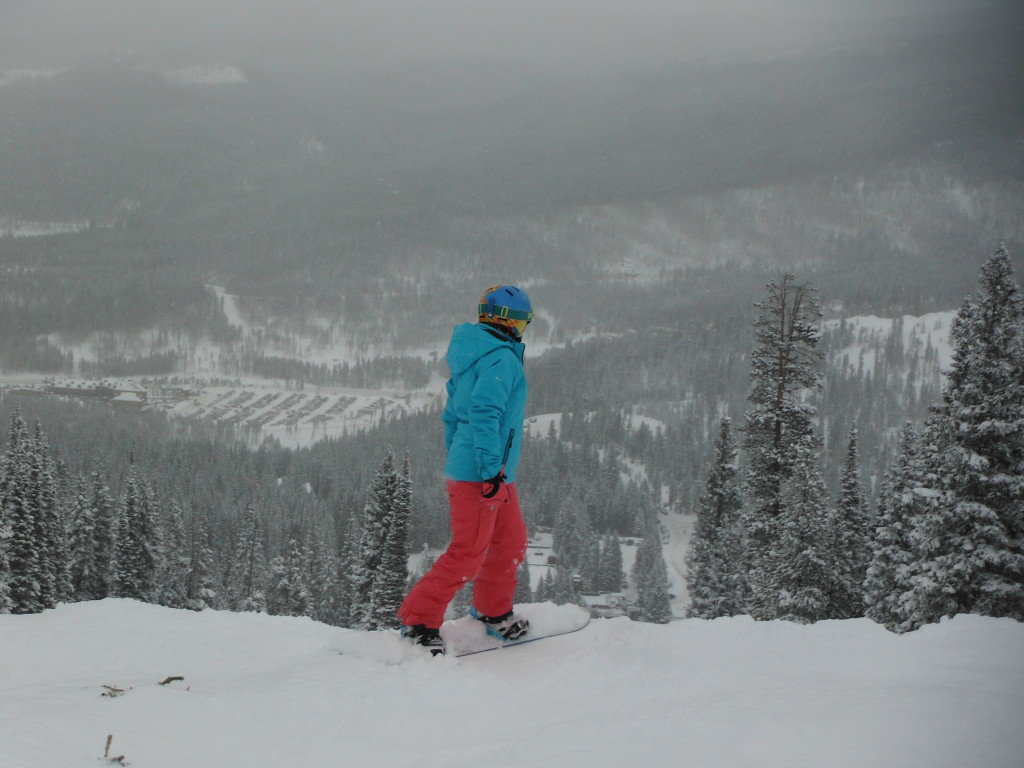 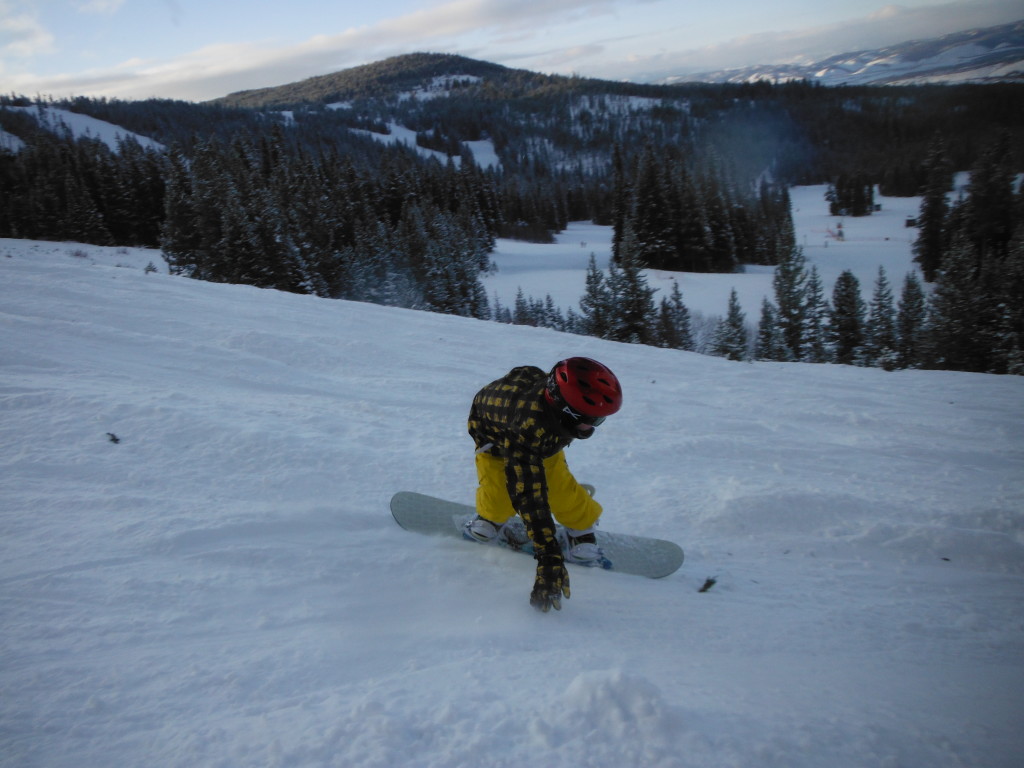 We were flying down the moguls together – me, happy to be able to go so fast in the powder, Devin, yelling out, “This is EPIC!” – when suddenly, Devin was taken out by a mogul. 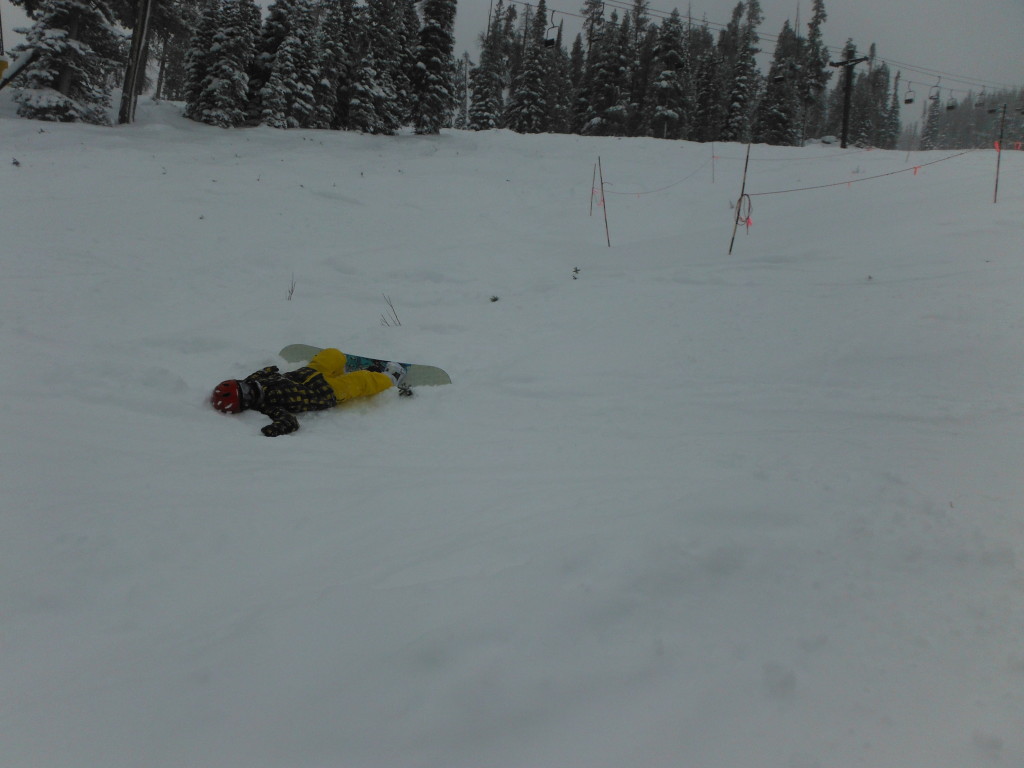 Devin and the mogul that took him out…

Fortunately, he wasn’t hurt, and he laughed and laughed at himself.  I love it that he can laugh at himself. 🙂 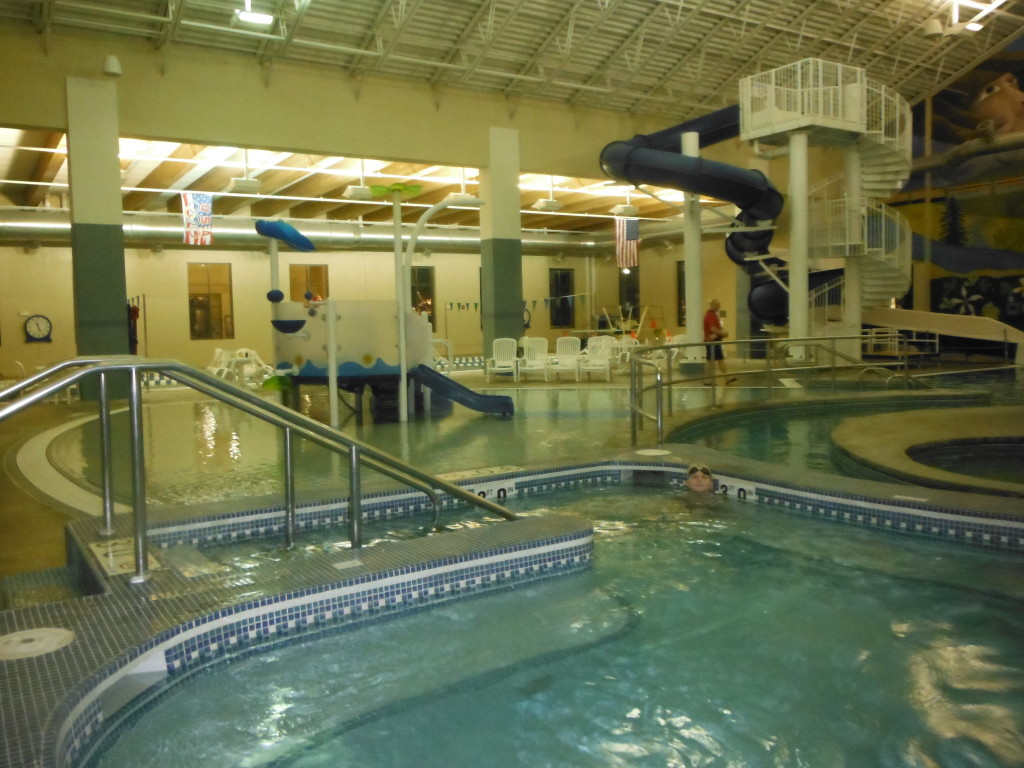 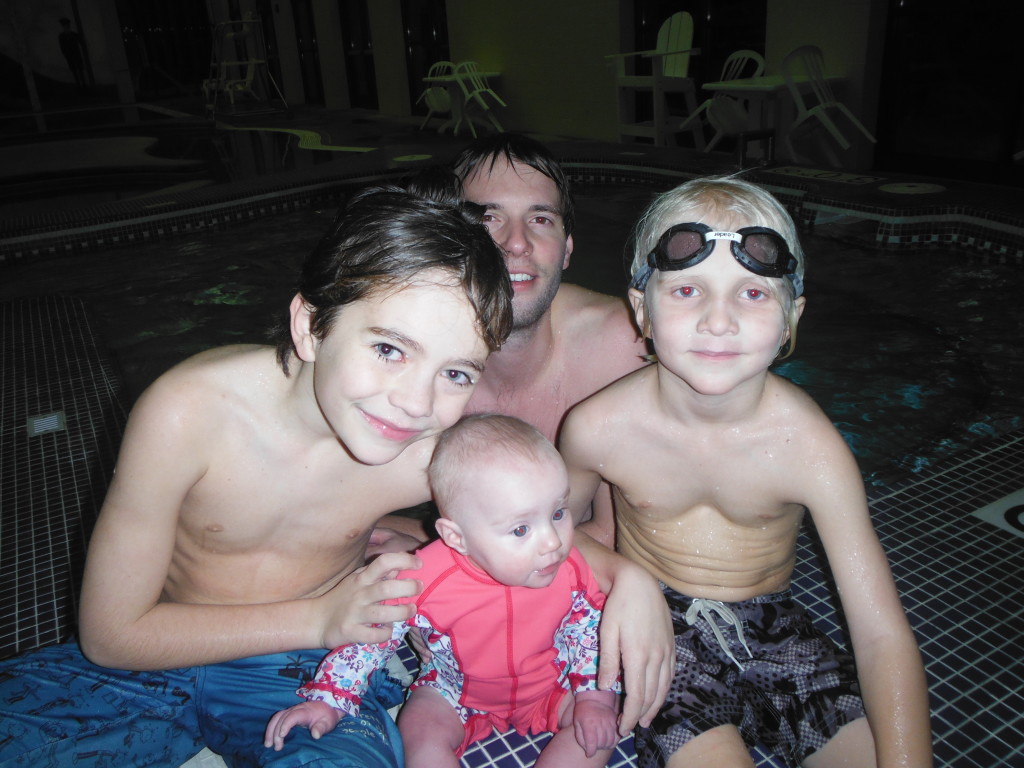 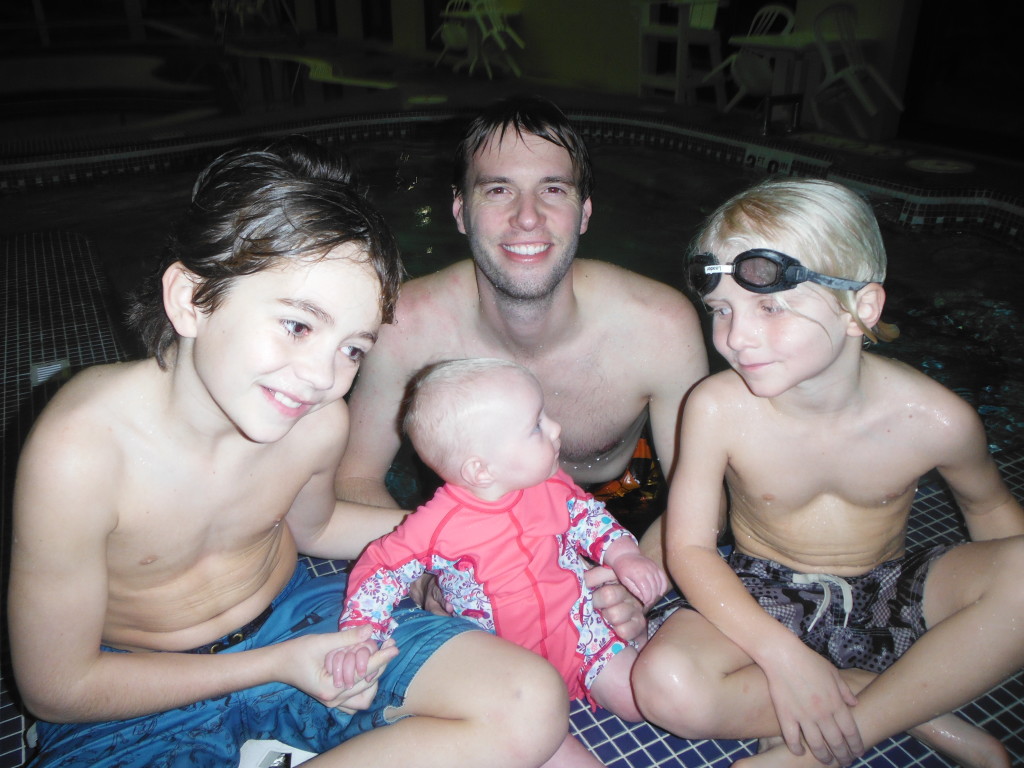 After swimming one night, Chris and the boys were climbing the rock wall. 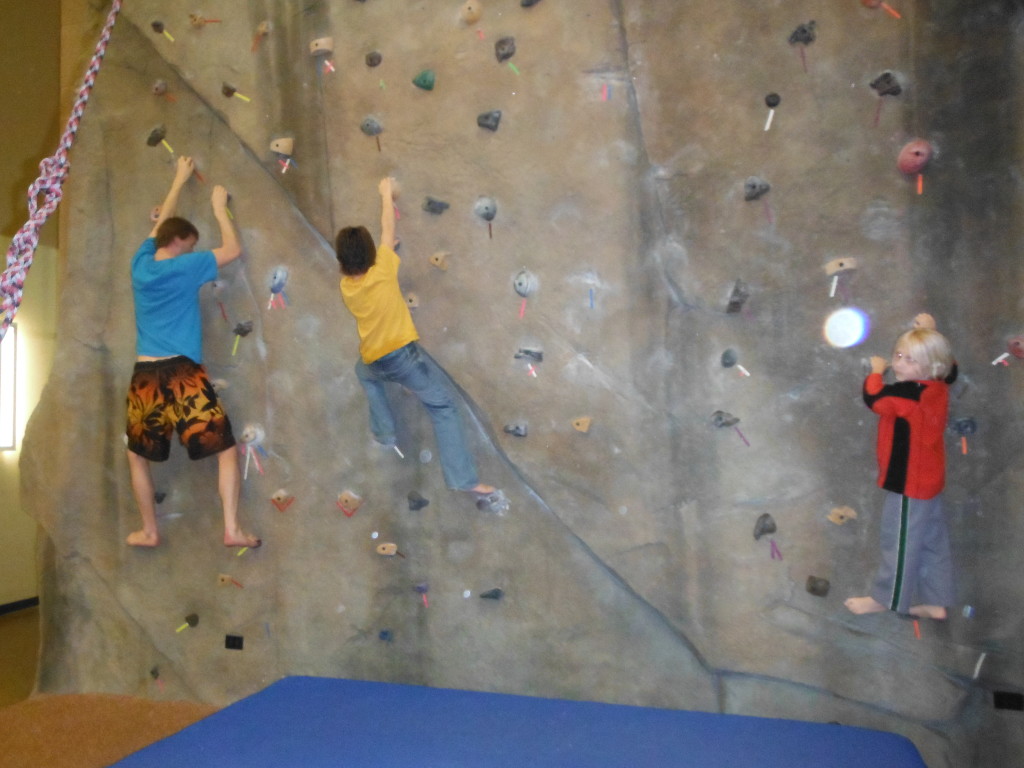 Lainey was being helpful by untying the belays. 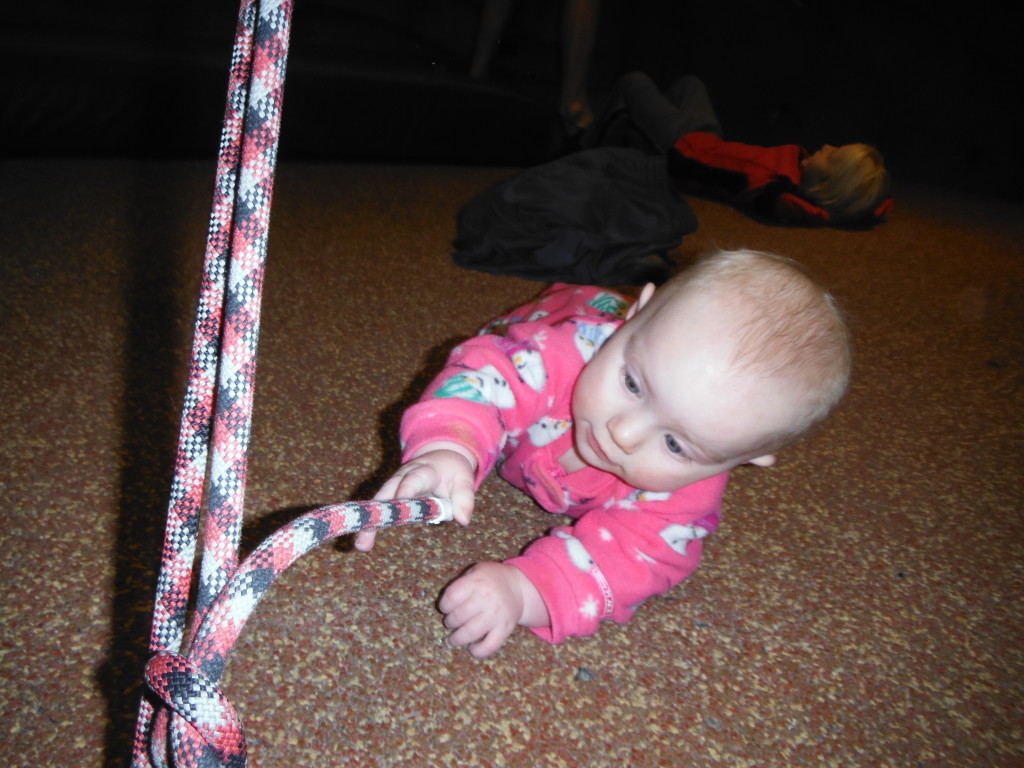 All three of the guys convinced me that the rock wall was so cool and I just had to try it.  Like many women, upper body strength is not my forte, but they wouldn’t take no for an answer… I started to climb.  It wasn’t so bad.  Until I got up the wall a ways, looked down, felt the strength in my shoulders failing, and screamed for Chris to lift me down.  I don’t think I have a future in rock climbing. 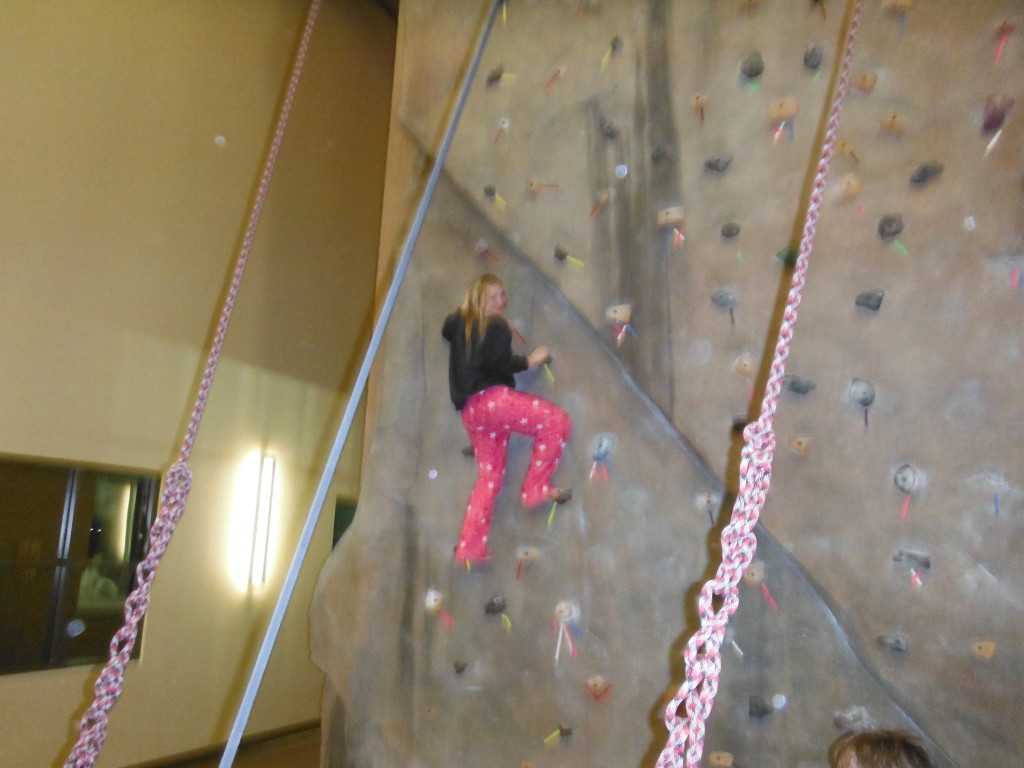 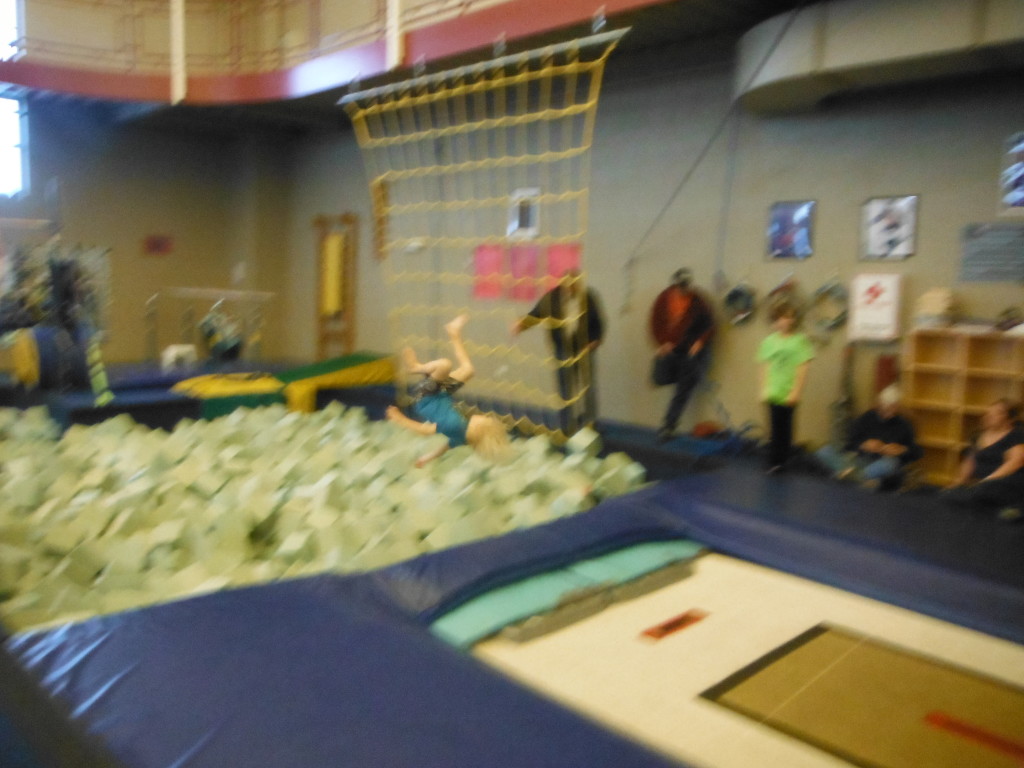 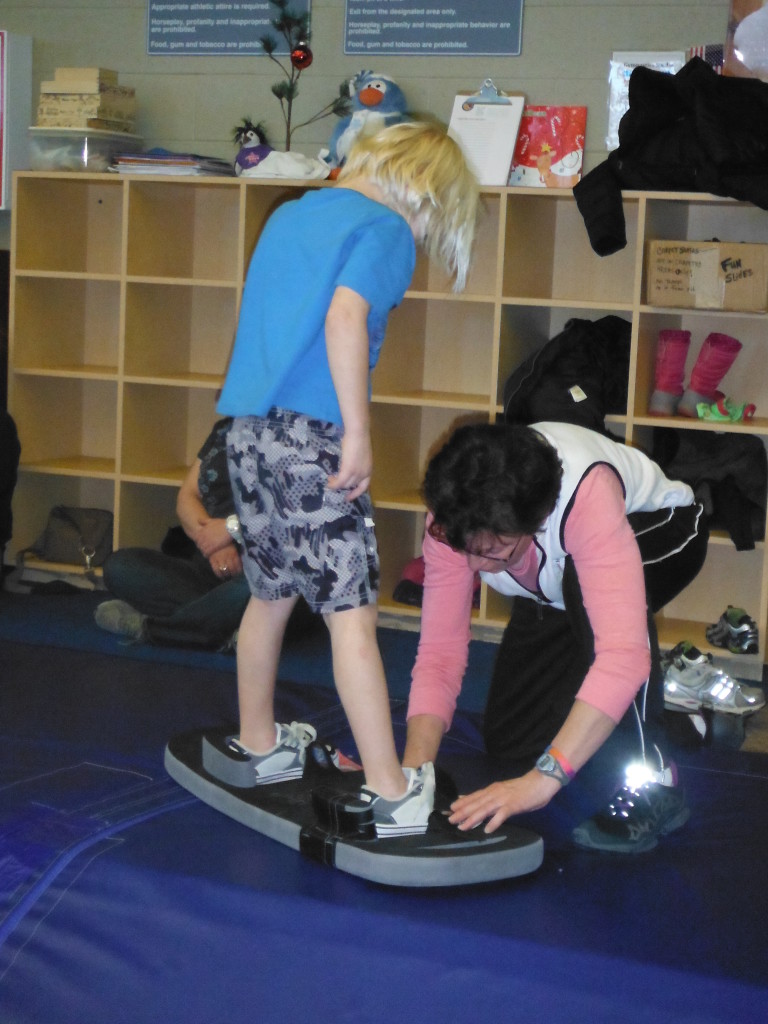 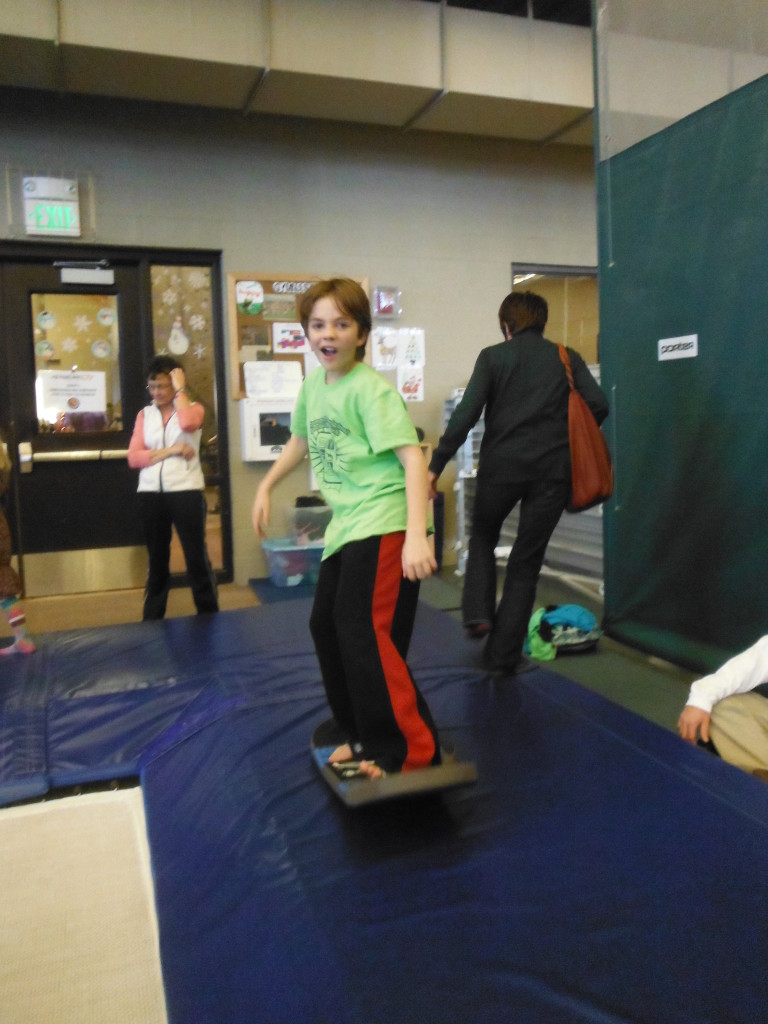 Lainey sat on Daddy’s lap and watched her brothers happily (I know she’s making big plans to run after them – as soon as she can run). 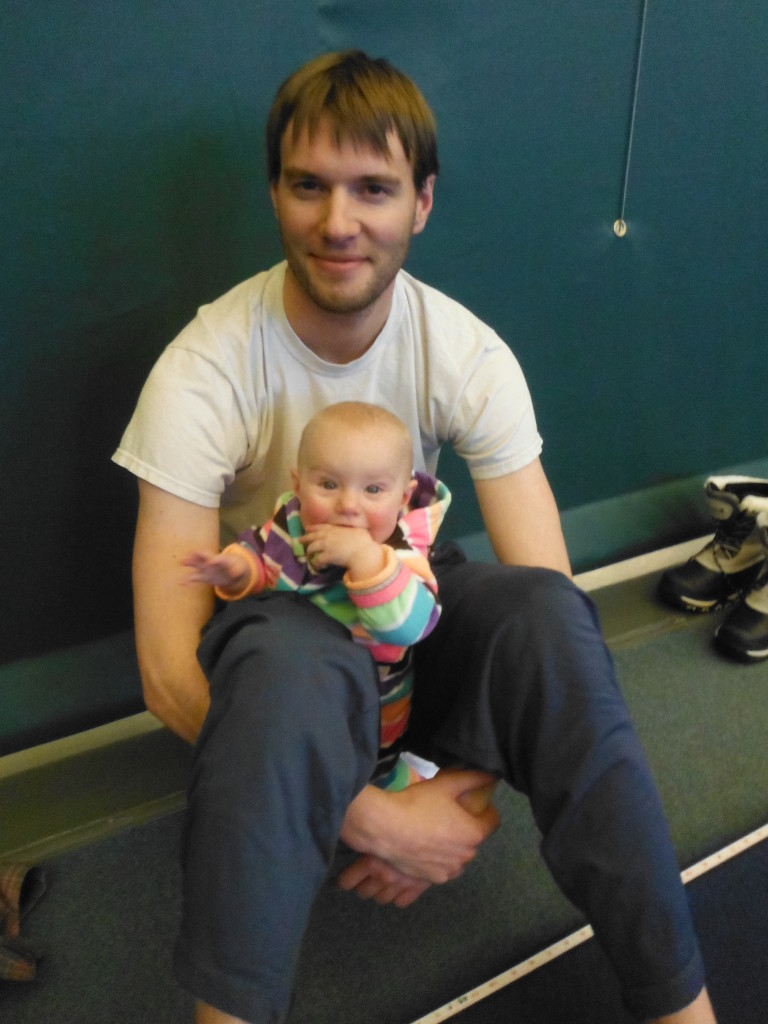 I was kind of jealous.  Why didn’t Chris sign ME up for this class?!  Then Devin – like a good big brother – catapulted himself into the foam pit and landed ON Wesley.  I was ready for World War III to erupt… but Wesley thought it was the most hilarious thing that ever happened. Phew!  I guess Wesley can laugh at himself, too. 🙂

Last winter, Chris was snowboarding with Wesley (who was five at the time) and Wesley said to him, “Hey, Chris!  Did you ever wonder why I’m a better snowboarder than you?” Chris hasn’t ever let Wesley live this down… he frequently repeats it to Wesley and they both laugh about it. 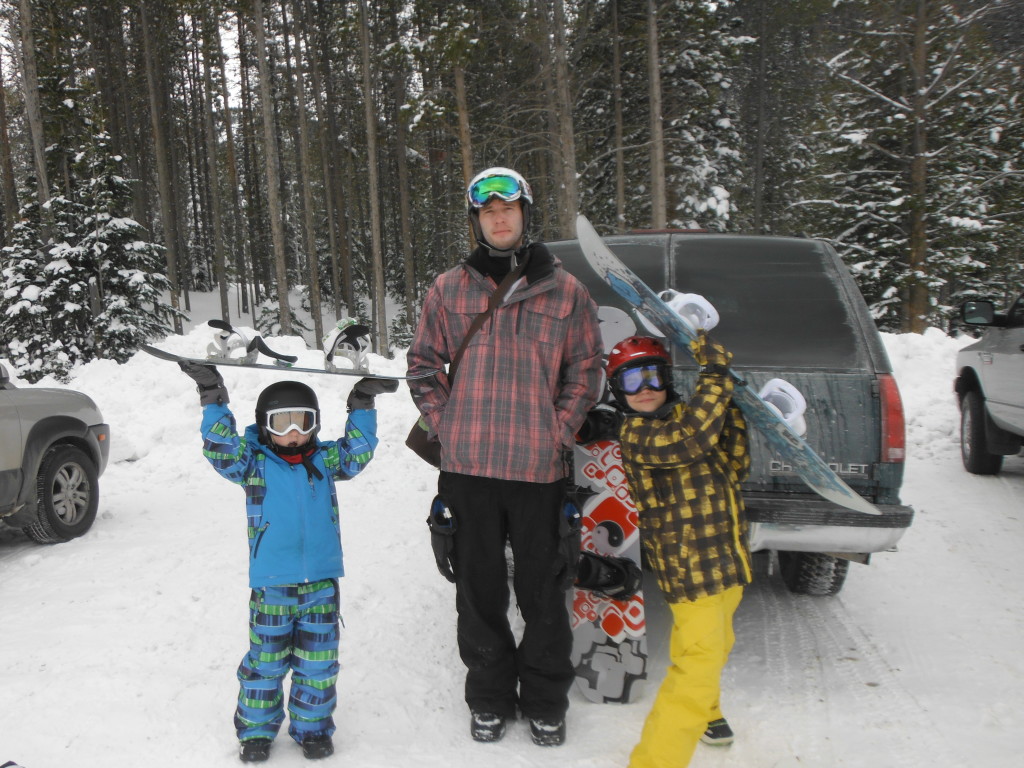 The other day, when Chris, Devin and Wesley were riding through the mountain woods, Wesley (and his snowboard) got stuck in some powder under a log.  “Chris, Chris! Help!  Get me OUT!”

Chris rode over to where Wesley was stuck.  “Hey, Wesley?”

“Did you ever wonder why you’re a better snowboarder than me?”  Chris couldn’t hide his amusement.

Wesley wasn’t laughing… he was giving his stepdad a look.  Chris took his turn as the alien creature. 😉 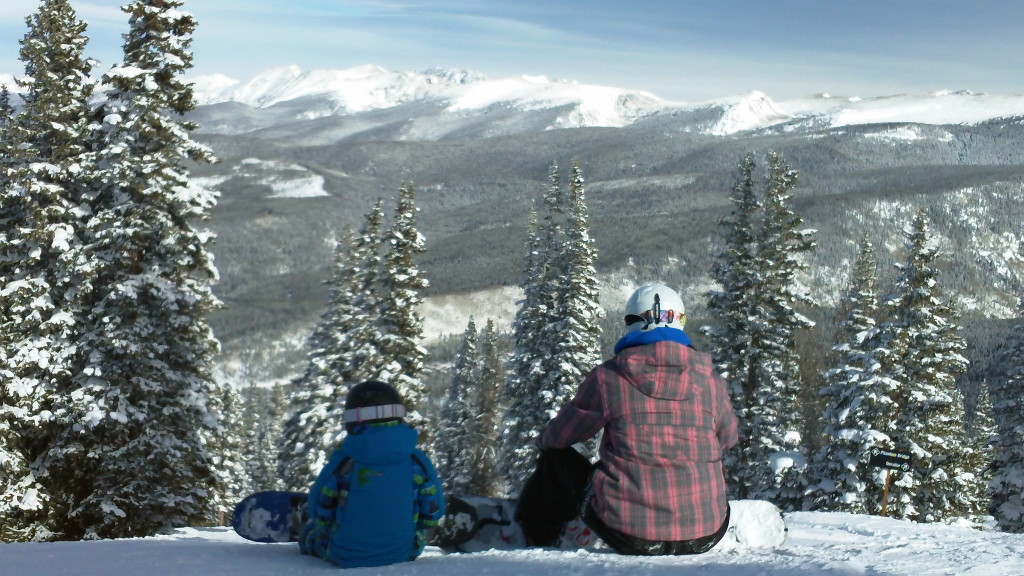 Wesley and Chris at the top of the Mary Jane complex… photo taken by Devin.