Wesley is a lucky duck.

He has crashed, tumbled, smashed his face, broken bones, blackened his eye, and has had enough scrapes and bumps to last a lifetime… except that he’s six. This series of events may have left another 6 year-old a little jaded. But not Wesley. He’s high on life and ready to throw down his next trick. 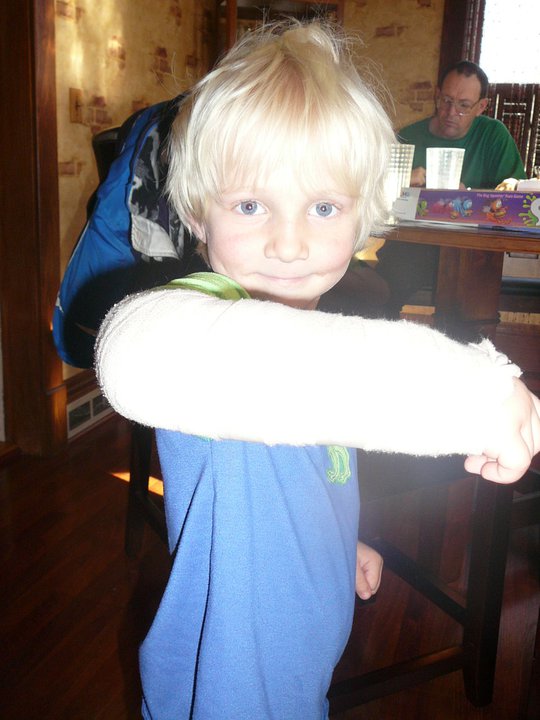 I can’t keep Wesley off the snow hill… or off his skateboard… or off his rollerblades or his bike. Luckily, though, I CAN keep a helmet and various other safety equipment (a spine protector and arm braces) on him! 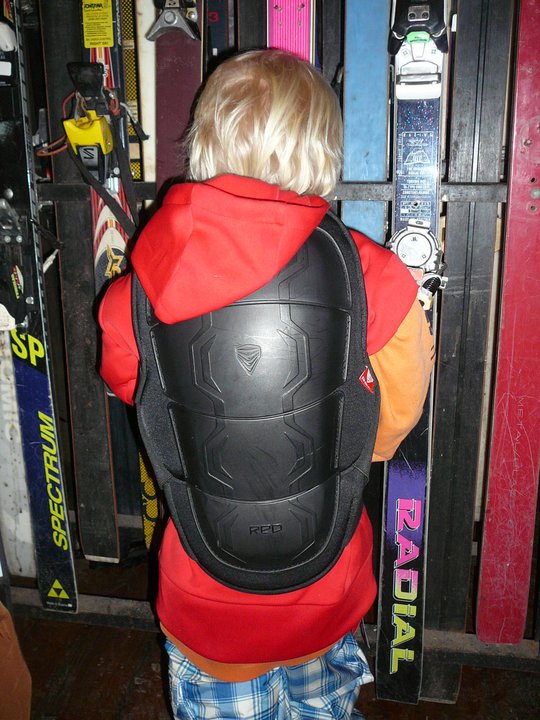 When I went to pick Wesley up from his USASA National Championships practice day (at Copper Mountain, Colorado), he was covered in blood. “What did you do to yourself?!” I was already imagining a few teeth missing or stitches being required, but I couldn’t see any visible damage, other than blood. Then he stuck out his tongue. Oh. 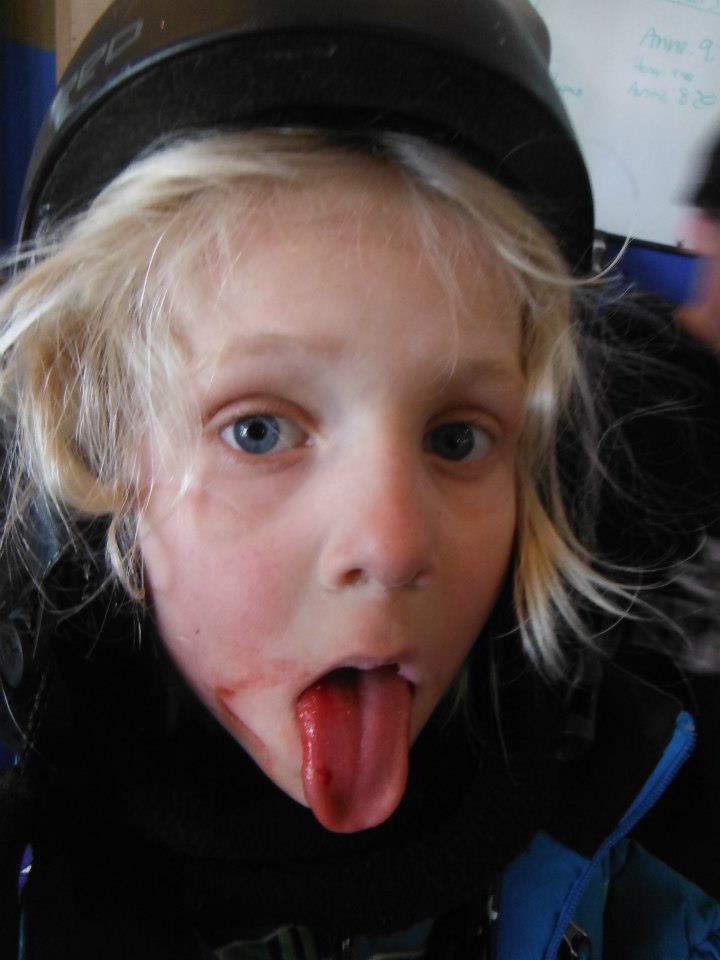 “I overshot a jump and bit my tongue on the landing. It doesn’t hurt. I was flying, Mom. You should have seen those jumps! They’re so fun!” Wesley was clearly very excited.

I looked over at his Team Summit coach, Sean. “He was charging the jumps today. People were standing there and couldn’t believe such a tiny guy could fly so high. It was fun to watch! He’s ready to go for Slopestyle tomorrow… and he’s the toughest 6 year-old I’ve ever seen!”  We both looked over at Wesley’s bloody face.

Now… if I were some other kind of mom, I might have blamed Wesley’s caretaker for the damage – but I know my own son too well. I also know that Sean most likely told him to slow down and be careful, and that doing so was probably akin to the wind blowing through Wesley’s ears. Wesley doesn’t know how to slow down and be careful. I don’t think the thought has ever crossed his mind …ergo, the absolute requirement that he wear every piece of his safety equipment at all times!

[Earlier during this trip, Wesley had been riding with his coach Keith, from Tyrol Basin — where his snowboard team trains – when they came across some freaky looking tree jibs. Wesley had never done tree jibs before. “Those look scary,” Wesley commented.

“You don’t have to do them if you don’t want to,” Keith tried to tell Wesley, but before he had even finished his sentence…

“I’M GOING!!!” Wesley flew across the thin log and hit the ground rolling on the other side. Nothing broken. Keith returned my child to me in one piece and tree jibs are Wesley’s new favorite thing… I wonder if his coaches ever worry about NOT returning him in one piece. Rest assured to all of them… I know that if Wesley comes back in pieces, it was entirely his own doing. 🙂 And that he wouldn’t hesitate to do it again. 😉 ]

“Thanks, Sean! See you tomorrow morning!”

The next morning was icy. As Wesley’s turn to take his slopestyle run came, I hoped he would tone down the maniacal runs he had been practicing the day before. My 6 year-old flew through the air like a missile and crash landed far far below on his back. “Please don’t be hurt!” my mind screamed. He wasn’t hurt. I was one for four!

Sean and I rode the chair lift up with Wesley before his second run to make sure he was okay. “I don’t know what happened,” said Wes. “I landed those yesterday.” Sean told Wesley that it was icy so he would have to slow down for his next run. I told him he had to slow down so that he didn’t hurt himself.

I could see Wesley contemplating this… and I could see that he didn’t like it. At all. There is one thing about Wesley that you must understand. Wesley wants to do the run that he wants to do. Just as he wanted to practice backflips in the quarter pipe the other day – despite me telling him he was going to break his neck – ice or no ice, he wanted to bomb those jumps. The bigger ones.

“So just take it easy and stomp your landings,” Sean repeated as the three of us exited the lift.

“Okay.” Wesley took off for the top of the course. He had been way too agreeable to that plan. 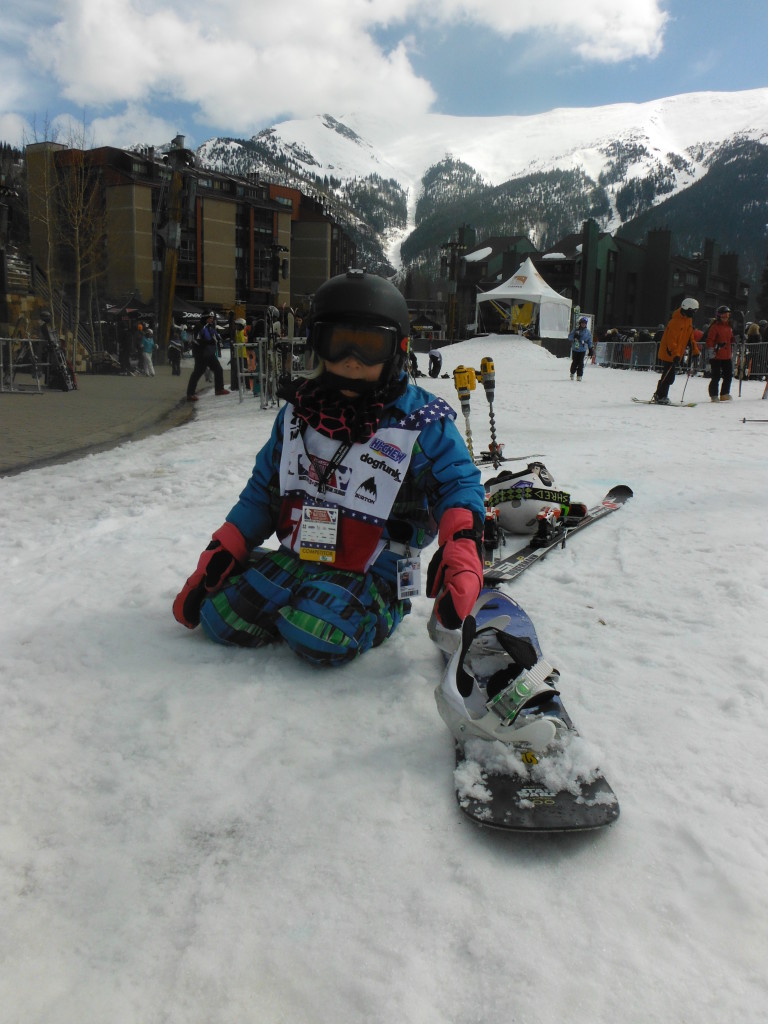 “Wesley… you didn’t slow down. You crashed again,” I pointed out gently.

Wesley gave me an exasperated look. “Mom,” he said as if he were explaining something very obvious. “I went faster and higher than anyone.”

“But Wesley, you crashed… I don’t think you’re going to get the best scores.”

“I flew the highest! I went the fastest! I flew the most!” He grinned.  Wesley was thrilled with himself. He had done what he set out to do… and if he didn’t care about scores, I sure didn’t care either.”

Actually, I was glad to see Wesley be himself. Wesley has never been a cautious, careful snowboarder. He has never toned down anything he does for any reason, especially not for better scores (does he even understand scoring or throwing down a clean run at this point? Doubtful). “GO BIG OR GO HOME!” is the motto Wesley seems to live by, and to try to make him ride in a way that doesn’t make him happy – in essence to change his style (already developing at the age of 6) – would be wrong.

It’s Wesley’s competition. It’s Wesley’s life. He chose to love snowboarding and he gets to decide what kind of rider he wants to be. As a parent, you try to teach your children to make good choices… to show them the importance of not only being able to live with their choices, but of being happy with them. That day, during that competition, Wesley wanted to fly higher and farther than anyone else. And it made him overjoyed. I can’t think of any better reason to participate in any sport. 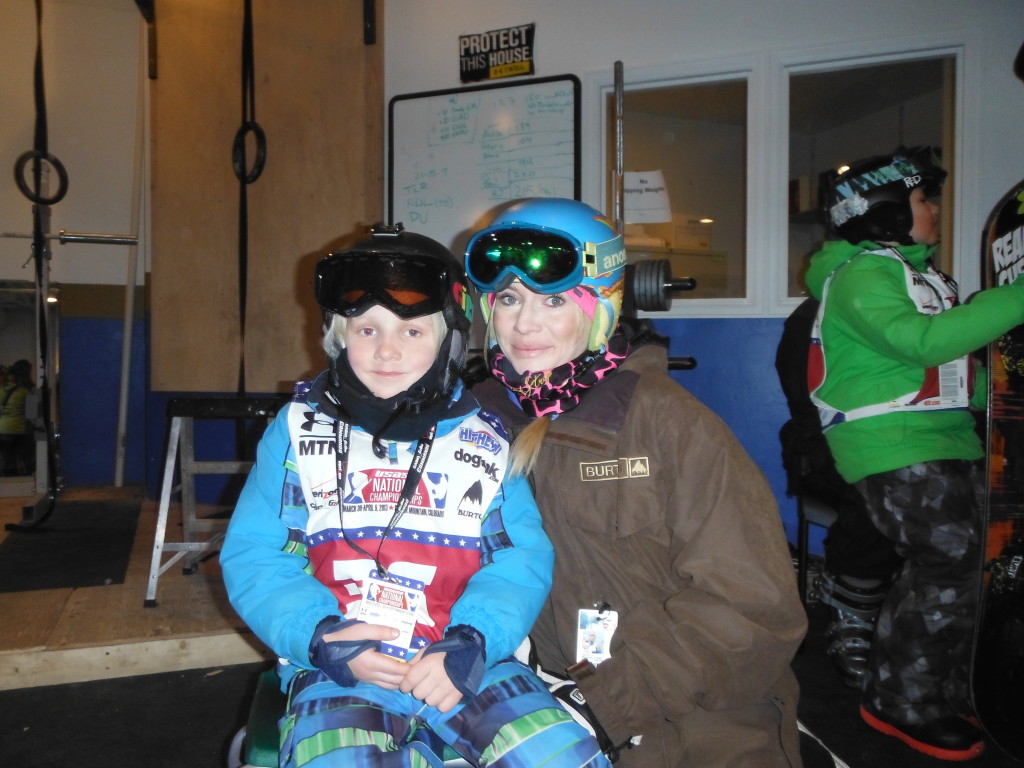 Mom and Wesley at Nationals

2 comments on “USA Snowboarding Association Nationals, Part 1: Be True to Yourself (Early April 2013)”