Today, mothers have a choice between “natural” and using various methods of pain control during childbirth. Women who do it one way have an opinion about women who do it the other way and vice versa. (Sometimes a not very nice opinion.) I feel like I have a valid point to make on this subject – rather than wanting to criticize the other half – because I’ve done it both ways.

Taking into consideration that not every birth is the same, even when the same woman is giving birth (all three of mine were different), that labor time, size and position of the baby, and personal pain thresholds vary drastically between individuals… why do those of us who have done it “naturally” feel we are somehow superior? It’s really kind of silly. It reminds me of the guy who goes around asking people to punch him in the abdomen so he can see how hard of a hit he can take. (In seventh grade, I thought I had some pretty strong abs, so I asked my friend to punch me in the stomach. She missed and hit my solar plexus, resulting in me splayed on the ground gasping for air. I never asked anyone to punch me in the stomach again.)

I gave birth naturally to my first baby. By the time he was ready to be born, I felt ready to KILL someone… or at least yell back at the doctor and nurses who were giving me instructions to push. “I AM PUSHING!!!!!!!!!!” Duh. When Devin was placed in my arms I remember thinking that I really loved him and that I also was never EVER having any kids EVER AGAIN.

With my second baby, my water had broken, but I wasn’t experiencing any pain yet. I walked into the hospital and said, “Epidural. Now.” It was supposed to be the magic fix. Oh geez, it still hurt like hell! But it was a little less painful and I was able to refrain from screaming at anyone during the delivery. When Wesley was placed in my arms I remember thinking that I really loved him, and that I also was never EVER having any kids EVER AGAIN – for real this time!

By the time I had my 3rd baby, 6 years had passed since I had experienced childbirth, and I must have forgotten how horrid it was because I started out with no epidural. My first two babies were three hour labors, and with this being my third, I thought labor would go pretty fast. Nine hours later I was sobbing and struggling to hold still long enough for the epidural needle to be inserted into my back as the contractions ripped through my body. (Between my second and third babies I was a passenger in a bad car accident and experienced lower back and hip injuries… I believe this to be the cause of my labor being so much more unbearable this time around.  Well, that… and the fact that it was labor!) Lainey took twelve hours to finally arrive at four am (just like a girl). Once the epidural was administered, a numbing feeling spread throughout my body and it felt so much better than the rip roaring, god awful contractions. Until I noticed that I wasn’t able to clear my throat. And then I started having trouble breathing and talking. The epidural wasn’t working the way it was supposed to. I was experiencing a “high block”, which happens during 1 out of 10,000 epidural procedures. I guess I won the lottery! My husband, Chris, was looking pretty worried, and the nurse wouldn’t leave me alone in the room in case I code blued. They turned my epidural off (NOOOOOOOOO!!!!) and I had to wear an oxygen mask for the rest of the birth. When Lainey was placed in my arms, I remember thinking that it was nice to be able to breathe again – and of course I loved her and FOR SURE was done having babies. Chris told me afterward that when I started not being able to breathe, he had worried that I was going to die. I’m glad he kept that information to himself 🙂 I experienced three weeks of my entire body itching nonstop after Lainey’s birth… a side effect of my epidural that didn’t work.

This is me being so happy that childbirth is over!!! As awful as childbirth can be… it’s also the easiest pain to forget when you hold that baby 🙂 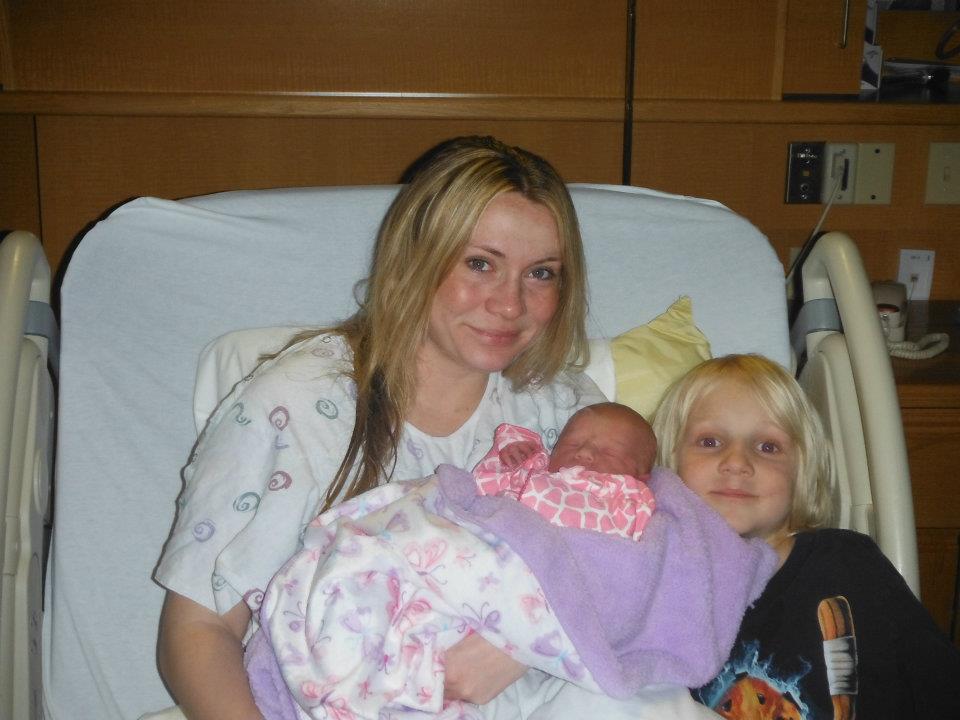 Proud daddy falling in love with his little girl… 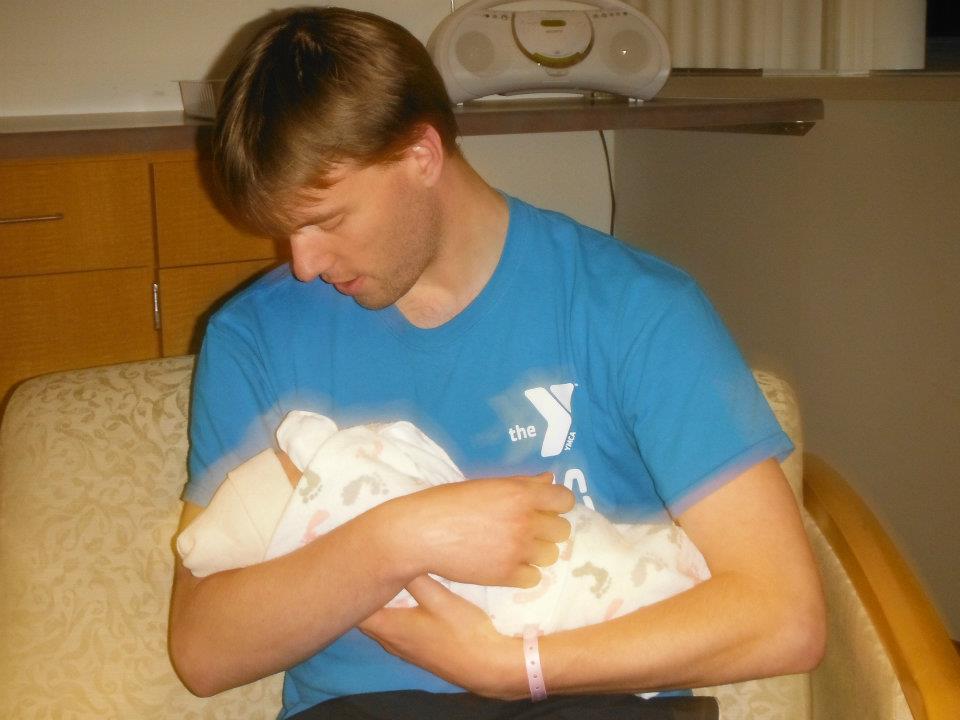 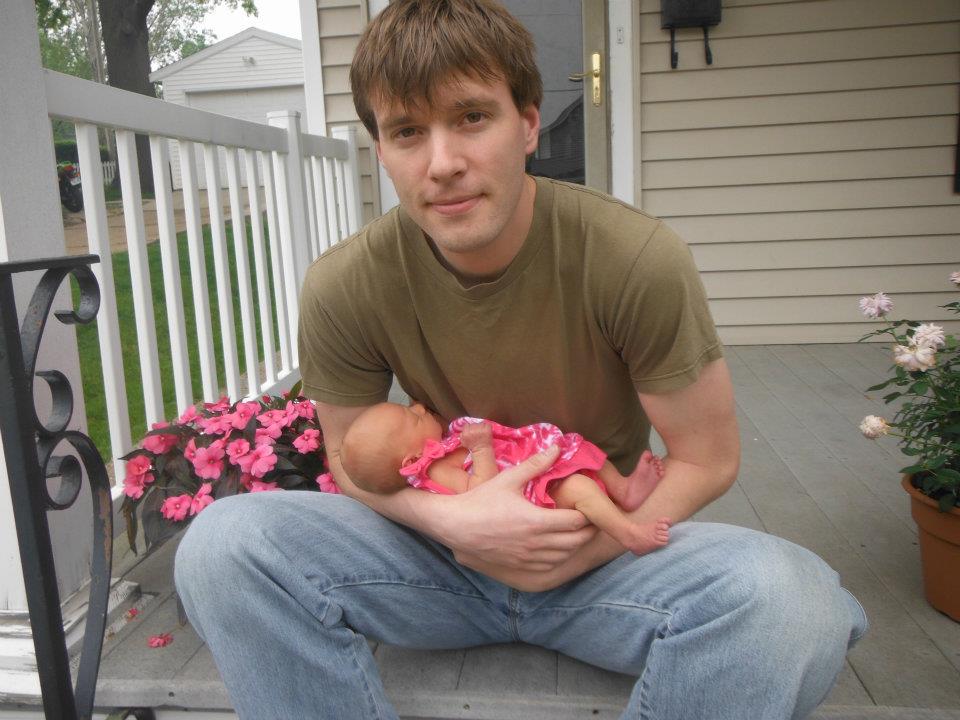 When Lainey turned three months old, Chris mentioned that we should get pregnant again right away. My first impulse was to slap him 🙁 (but I laughed instead).  I’m not sure if he finally won the argument or we had an “oops”, but Lainey turned one year old in April, and I’m due in August with mini-shred #4… a boy! 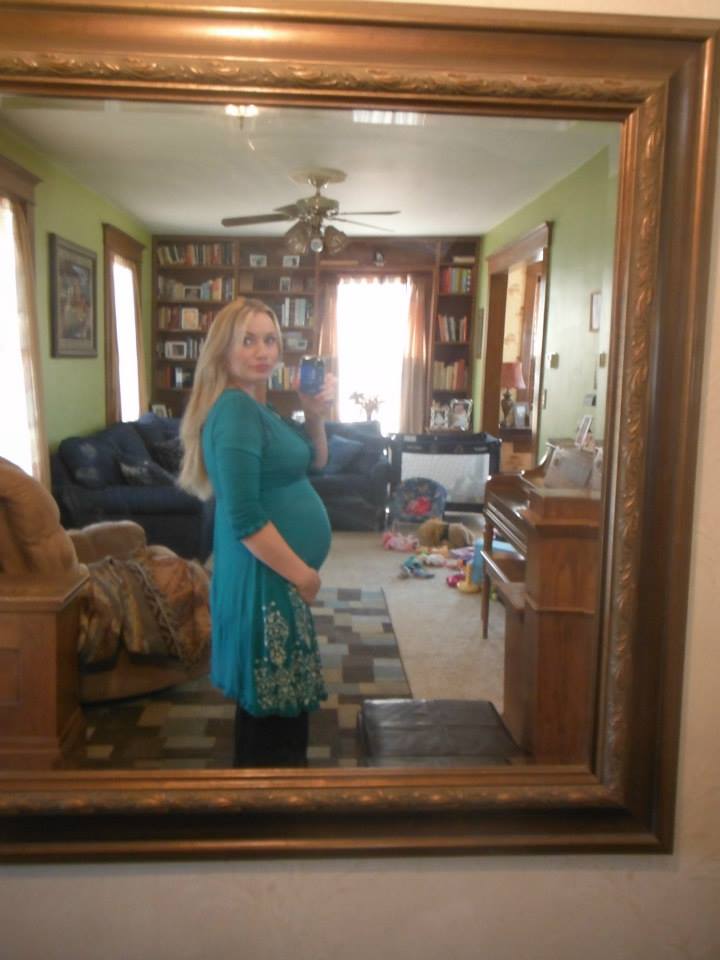 I hope he doesn’t take his time like his sister.  He has some impatient siblings who already can’t wait to welcome him to the family like they welcomed Lainey 🙂 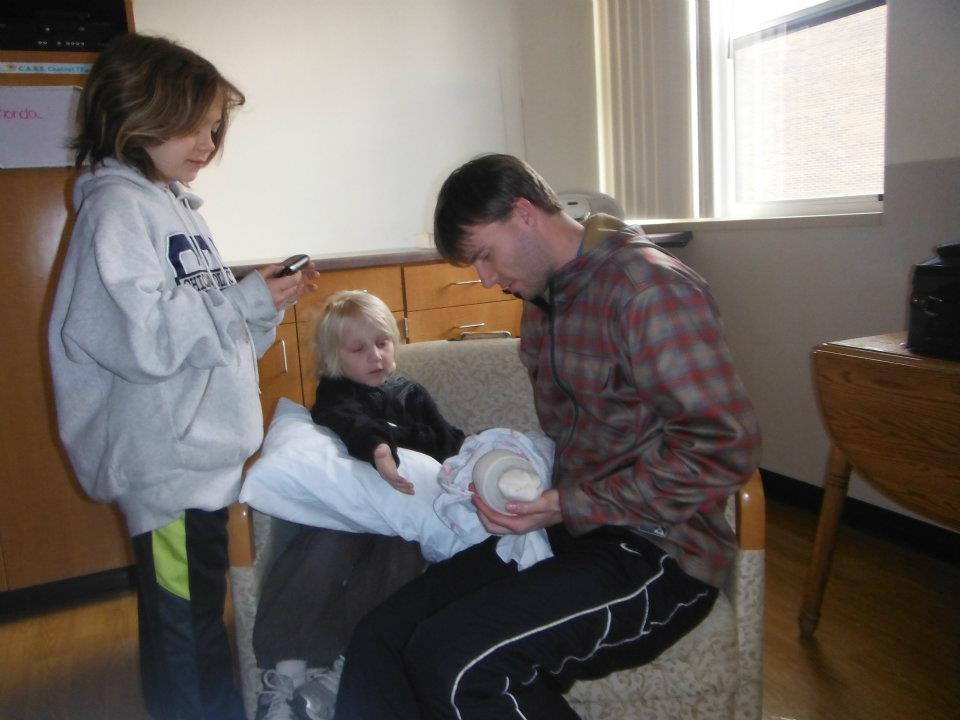 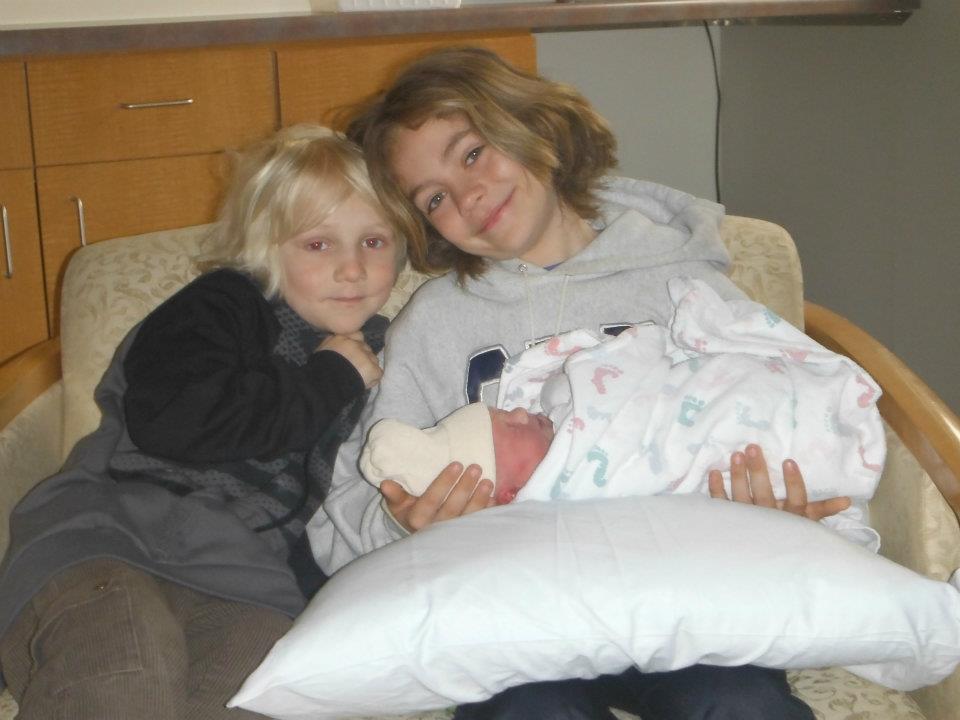 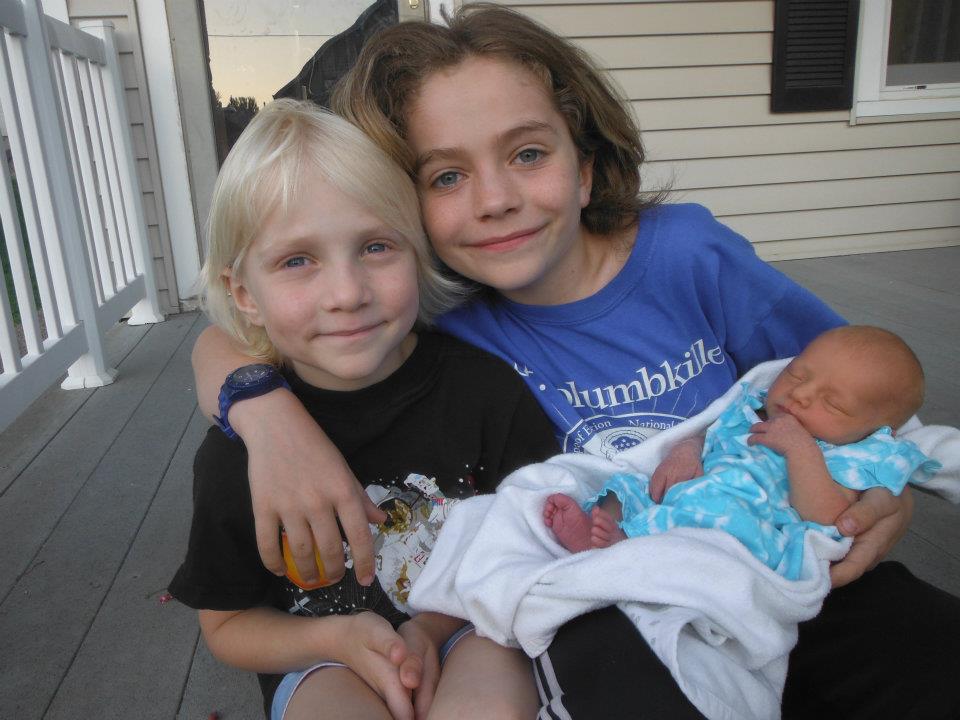 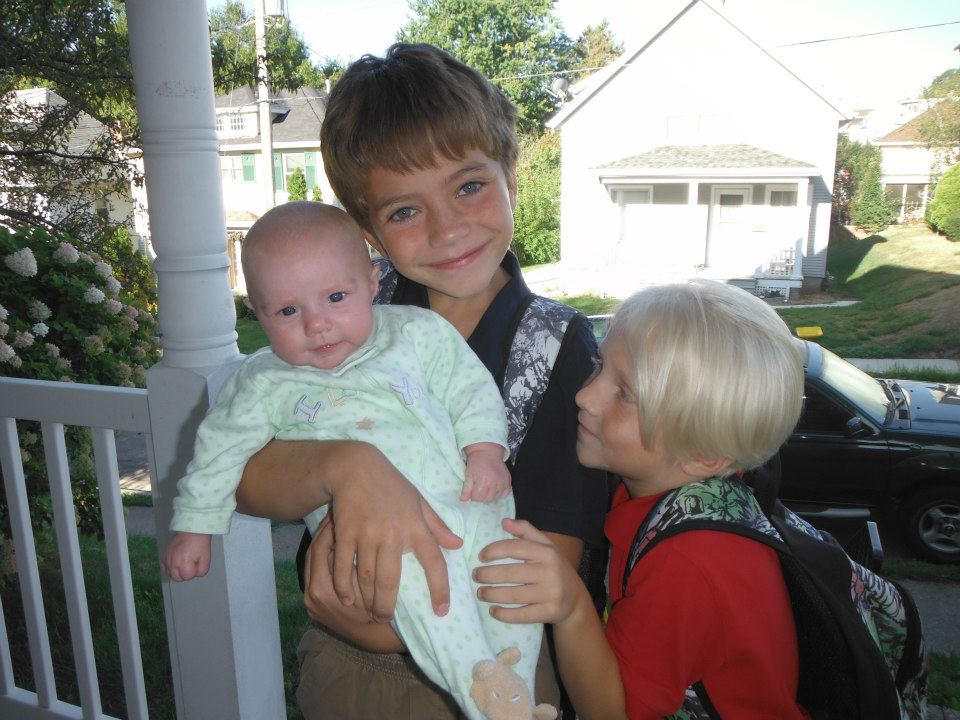 He thought it was great and said that more men should try it so they know what it’s like. I asked him if he wanted to try it and he said he meant the men who don’t already know how bad it hurts should try it. Then he asked if he had to be in the delivery room this time because the last time was kind of rough on him. Ha, ha, what a funny husband I have!

Any woman who has given birth by any means deserves a medal. Truly.  Hug your moms.  They’ve been through a lot.

My apologies to anyone who is pregnant or plans to be pregnant in the future that I have scared… childbirth is totally doable. Women have been doing it since the beginning of time. We must be some pretty tough chicks 😉

Anyone have a pregnancy, labor or birth story to share?  We moms sure love our kids… the things we go through to bring them into the world, though!