The Ellen Show called my son, Wesley, last week. Um, yes… The Ellen Show. I have no idea if it will go anywhere beyond that, but it was pretty cool to just get the phone call. As Wesley was interviewed on the phone about his love of snowboarding, I heard them ask him if he was ever afraid. “No,” was his immediate response.

“What do you tell yourself to not be afraid?” the producer then asked him.

“Nothing. I’m just not afraid.”

Wesley’s answer might be a little baffling to some, but not to his mother… I know exactly what he feels — or doesn’t feel.

I should probably explain that Wesley got a phone call from The Ellen Show because his 6 year-old snowboarding edit was played on television a short time ago. (He is 8 presently… having two more babies in the last couple years delayed me in mixing his edits together — I’m trying to get his 7 year-old footage from last spring mixed now.) I’ve been taking Wesley and his older brother out snowboarding since Wesley was 3 (we all learned to snowboard during the same winter, but I learned two months after my boys). Normally, the media, people on the slopes, and pretty much everyone who doesn’t know Wesley personally, assumes that Wesley must have some pro-snowboarder dad that pushed him into learning tricks very early. The truth is far from that… Wesley led the charge into the world of snowboarding. I had never snowboarded when he started (though I picked it up quickly and became a snowboard instructor the following winter). When Wesley’s 6 year-old edit was played on television, and the question of his supposed “pro-snowboarder dad” came up, they actually mentioned that it is Wesley’s mom who takes him out snowboarding all the time.

Yay!!! Thank you! Moms can be athletes, too, and they can pass their athleticism onto their daughters or sons…

I felt like it was a victory for athlete moms everywhere. Things are changing — and certainly aren’t like they used to be — but I’ve still experienced a great deal of being treated “like a girl” when I’ve tried to coach or help out at my sons’ athletic events. Not to mention some of the stares and comments I’ve gotten when I’ve showed up to referee a boys’ or men’s soccer match. I’ve been the head coach of my son’s baseball team, and had to fight to stay in that position as some of the team dads decided they had better take over for the little woman. After I taught all their sons to bat like champs, they backed off — but the initial assumption was that I didn’t know how to play baseball. I had to prove myself first. In fact, I’ve seen parents show more support for a male coach who has never played the sport he’s coaching, and knows nothing about it, over a female coach who played the sport her entire life. Another time, I showed up at my boys’ sporting event, where the two male coaches asked for parents to stay and help at practice. I was the only parent who stayed, but I was first ignored… then told they actually didn’t need any parents to help. I got the message. They didn’t need any women to help. And especially not miss five foot two long blond ponytail. Go away little girl. It was fun trying to explain to my boys why I wasn’t welcome at their practice.

[I want to mention here that the majority of men I’ve met in the sporting world fully accept and encourage women in sports, coaching and officiating. Thank you to all of you. You set an amazing example! Hopefully the naysayers will follow!]

I’ve been an intense, extremely competitive athlete my entire life. Though I admit to being a baby about some things — I cannot watch horror movies — physical pain never bothered me much; muscle fatigue and exhaustion only motivated me to push myself harder. I am of tiny stature compared to the majority of athletes, but regularly bested people twice my size in strength and endurance. Must have been my chi. I remember once getting called for a flagrant foul for boxing out too hard. I knocked a girl flying across the gym on her behind. I hadn’t meant to do that at all. I just knew she was not getting that rebound so I needed to back her out of the lane. Another time I was playing in a 3 on 3 basketball tournament. I sprained my ankle so badly I couldn’t walk — at all. I taped it as tight as I could, ignored the pain, and finished the tournament. We took 1st place. I turned down a full scholarship to play soccer in college, but played on a men’s adult league team throughout my twenties. My size, combined with playing against men, meant that I got the crap knocked out of me a lot. I always got up. After one game, my team’s opponents started joking that the men on my team were faster than me, but that I was tougher than them. My teammates laughed. They knew it was true, and they regularly got a kick out of our opponents expecting to run right by me, only to have me steal the ball and score a goal on them.

Which brings us full circle back to snowboarding… I learned to snowboard when I was 26, because Wesley loved it; I wanted to understand the sport, and be able to help him as best I could. I learned how to go off jumps, ride rails, butter, shred powder, moguls… I asked every question I could think of to everyone who would talk to me. I wanted to know about technique, board control, how to protect from injury — anything anyone would divulge. Then I became an instructor. I had heard that you never truly know how to do something until you can teach it to someone else. It’s true. Teaching lessons made me a better rider — I had to ride around with only one foot strapped into my bindings while I taught. Soon, 4 year-old Wesley was riding around with only one foot strapped into his bindings because he wanted to be like his mom.

Wesley started hitting jumps and riding rails at age 3 — almost as soon as he could balance on his board. In my second month of snowboarding, I began the same. Over the next couple years, I crashed and smashed my way through learning snowboard tricks. I displaced my kneecap on a corrugated pipe. I bruised my shoulder sliding out on the landing of a big air jump. It was painful, it was exhausting, and it motivated me to try harder. I was proud of myself the day I gapped a large handrail… jumping, then landing in the middle of the four inch wide metal rail, and riding the rest of it down. I did it twice, perfectly. I landed some of the big air jumps in Colorado. Sometimes I fell. Many times Wesley did much better than I, and, after kicking butt in sports for years, I had to accept that my preschooler was kicking mine….

Probably the most brave (or stupid) thing I did on my snowboard was when I started — at the age of 27 — learning to spin off jumps. I had 180s down, and was determined to land a full rotation. All summer, I had practiced it while jumping on the trampoline with my kids. I was done teaching lessons for the evening, and my kids weren’t at the snowhill with me… it was the perfect time to practice. On my second try, I crashed hard. It was my darn shoulder again, and it was bad. Holy heck, had I broken my collar bone? I could get up and walk so probably not, but my shoulder was throbbing incessantly. I also had almost landed my 360, but caught my edge at the last second. I knew I could land it, but my shoulder was screaming. This trick was important to me. I had worked hard, and could NOT give up when I was almost there.

As a serious athlete, I’m hyper aware of what I put into my body. It’s not that I’m entirely against junk food, or caffeine, or alcohol, but I don’t normally consume a lot of junk food, or any kind of drug. My health affects the performance of my athlete’s body, so I’m pretty disciplined about what I choose to put into that body.

My shoulder throbbed worse as I rode up the chairlift and dragged myself into the lodge. I walked up to the bar and ordered a shot of vodka. The bar tender was shocked. I’m normally a hot chocolate or water kind of girl. But I knew the alcohol would numb the pain. Still, I stared at the shot for ten minutes. I hate the taste of hard liquor. I also hate what I know it does to my insides. How badly did I want to land my 360 before I went home to take care of my wrecked shoulder? I closed my eyes and swallowed it down as quickly as possible. The throbbing in my shoulder lessened. I went outside and threw down the best and last 360 I’ve ever done. (It was the last because I needed the personal satisfaction of knowing I could do it, but did not need another shoulder injury. It was also around the time I met my husband, who said he liked my collar bones the way they were.)

Last week, on the way to snowboard practice, I told Wesley he shouldn’t put drugs or alcohol in his body when he’s older, because it will affect his decisions, health and athletic performance negatively, and he certainly should never drink while he’s snowboarding, because it will impair his judgment and he could be seriously hurt. (Does a non-drinker taking a shot to dull excruciating pain count as drinking while snowboarding? Maybe I’m a hypocrite…)

I have pushed through physical pain and exhaustion my entire life. I don’t know another way. I had a childhood full of playing hard.

Now my second child is fearless on his snowboard. The time he broke his arm — at age 4 — comes to mind. As the paramedics wheeled him into the ER on a stretcher, I was horrified. I was with him in the terrain park when he crashed, and the whole debacle had caused me to panic and burst into tears (though I can handle my own physical pain, the pain of my children is another story). I felt like the world’s worst mom for letting him participate in such a sport, as well as helpless at not being able to do anything for him. Wesley lay on his stretcher, and turned his head toward me. “Mom?”

“Next time I’m going to land that jump!”

Six weeks later, 4 year-old Wesley was back on his snowboard — cast on his arm and all — and qualified to compete in Nationals that year.

I guess I understand Wesley like nobody does. I could try to protect him as much as I want, but could never protect him from his own determination. It’s in his heart, and it’s in his blood. And it’s my fault, because it’s in my blood, too. Wesley is just not afraid. 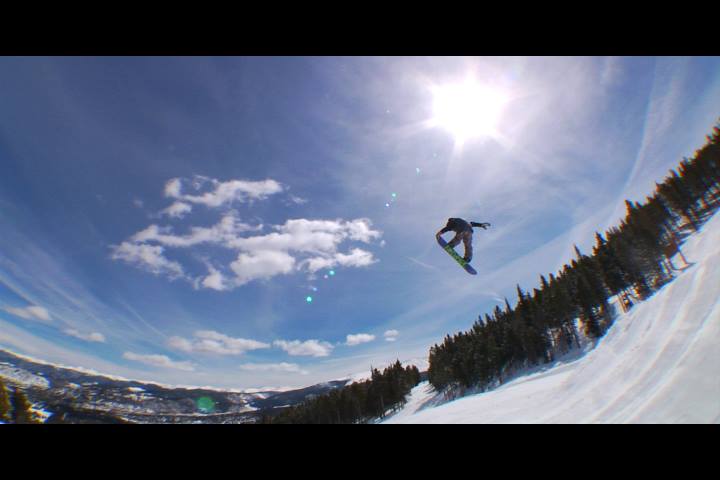 He gets it from his mother… and that’s okay. 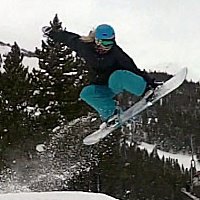 — Chi is the vital energy that is held to animate the body internally and is of central importance in some Eastern systems of medical treatment (as acupuncture) and of exercise or self-defense (as tai chi).

1 Pings/Trackbacks for "“I’m Just Not Afraid”"