He Who Must Not Be Named 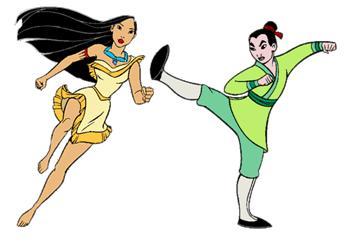 So… my two year-old daughter, Lainey, is having a princess dress up/tea party luncheon tomorrow… and who does she want to be, but Mulan. I asked the person who works at Party City if they have a Mulan costume and they said, “No, but we have Pocahontas.”

Yeah… cause Mulan and Pocahontas are even remotely close to the same culture. (And I can’t really imagine the Barbie size boobs on Disney’s Pocahontas disguising themselves as a man and sneaking into the Chinese army.)

How am I going to turn my blond haired blue-eyed daughter into an Asian Princess? She might have to go with her second choice — Princess Merida from Brave. At least I can find a Merida dress. No one’s selling Asian Princess warrior outfits right now. Gotta say I’m loving her choice of kick butt warrior princesses, though 😉

I’ve been running around like crazy, of course, trying to get ready for said party. It’s the first time many of my friends have been to our house since we moved, and I don’t want it to look like the usual scene out of Where The Wild Things Are, complete with my very own set of four Wild Things running around.

No one did the dishes after dinner tonight, and I still have to put decorations up, make the punch, get food set out, figure out what princess dress I’m wearing — I had this genius idea that the moms should dress up as princesses along with the daughters, which I’d like to smack myself for now since I’m running out of time and still not sure which princess I’m dressing up as — plus I have to guard the entire 3 floors of our house all morning from my 4 children and my husband so they don’t mess anything up before the guests start arriving. It sounds so simple in theory… oh, why do I do this to myself? I just want to have an awesome party. That’s all.

Oh, and here’s the kicker of all kickers… my husband — who recently earned himself a he-who-must-not-be-named status — signed me up to run a 5k with him in the morning… before our daughter’s party. Thanks, he-who-must-not-be-named. Let me add wake up at the crack of dawn, run a race, change my sweaty stinky clothes, shower, blow dry my hair, and get dressed for the second time of the day to that list of mine.

Hope you all have read Harry Potter. My hubby hasn’t.

PS. Where are some wizard powers when I need them?