My husband calls me a “stress case”. I can think of something no human being has ever worried about before and have an anxiety attack over it. I’m having one about remembering to pick up items for Devin’s middle school social event this weekend (the items I became aware of when, after school one day, Devin announced, “The sign up sheet wasn’t full yet, Mom, so I signed you up to bring everything!”) As I write this, I’m having another anxiety attack over knowing that I never get enough sleep, but not knowing how to actually get enough sleep, because of knowing that my brain never. shuts. off.

I mean… I really can’t help being a stress case. I have one child (12) who’s aspiring to be a hacker (recently, the technology department called to tell me Devin knows more about coding than they do, but he needs to stop reprogramming his school furnished IPAD or they are going to take it away permanently)… I have another child (8) who’s a fearless daredevil maniac and loves nothing better than back flips (off the furniture, on his snowboard, on the trampoline, diving board… wherever). Wesley’s trying to set the record for number of trips to the ER during childhood… Oh, but it’s my 3rd child — and only daughter (2) — whom I predict will give me gray hair. (My 4th child just turned 1, so I haven’t figured out exactly how he’ll stress me out yet… he’s still 100% sweet and cuddly.) 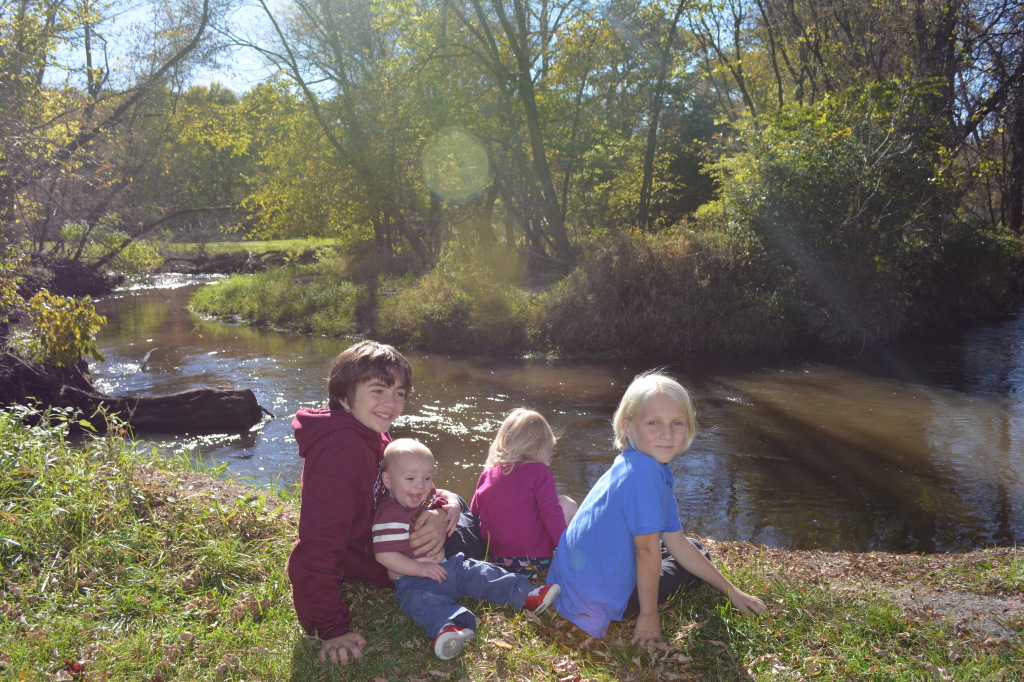 Here’s a rundown of the last few days of Lainey…

My toddler daughter could not find some inconsequential piece of paper to draw on… it was the signed HUD settlement statement for our house closing that I needed to FedEx to the bank by tomorrow morning. Sigh. This is after she dumped an entire box of kitchen matches on the floor and yelled, “It’s happy birthday time!” (Those are getting put away in a much higher cabinet.) I really need her to not stop taking naps. I can’t get anything done. It was supposed to be naptime, but Lainey had to have pigtails, so of course Merida had to have pigtails. Next, she asked ever so sweetly, “Lainey brush mommy’s hair, huh?” She then proceeded to grab my hair and try to walk across the room in order to be near her brush laying on the floor. I was still seated and my hair was still attached to my head at this time. Although I didn’t know if my hair was going to be attached to my head much longer. 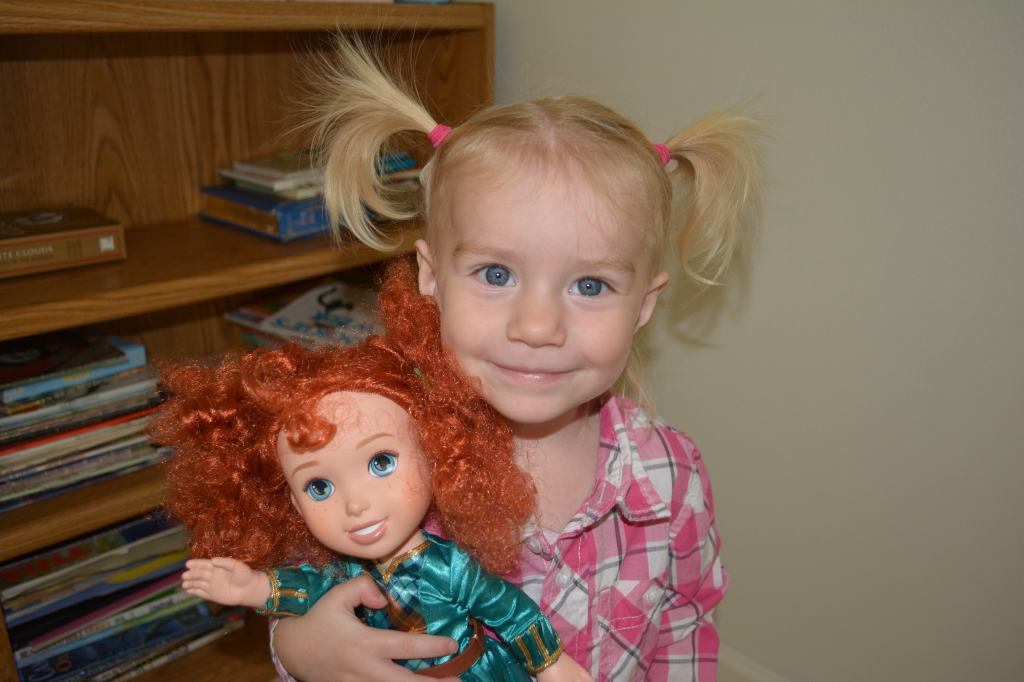 Last Saturday, she dumped an entire bottle of baby powder all over her room. She even opened each drawer in her dresser and dumped it on all her clean clothes. When her dad discovered the powder snowstorm, she looked at him, shrugged her shoulders and said, “I just knocked it over, Dad.”

“Not cool, man!” she yelled at her big brothers when they were arguing. Lainey doesn’t like to watch her brothers fight. They continued to argue, so she yelled, “You’re a big jerk!” at them. I wonder who she learned that from? Devin? Wesley? Bueller?

Tristan (1) was happily playing with a horse, until Lainey shoved him, explaining, “This is Lainey’s horse, Tristan.” 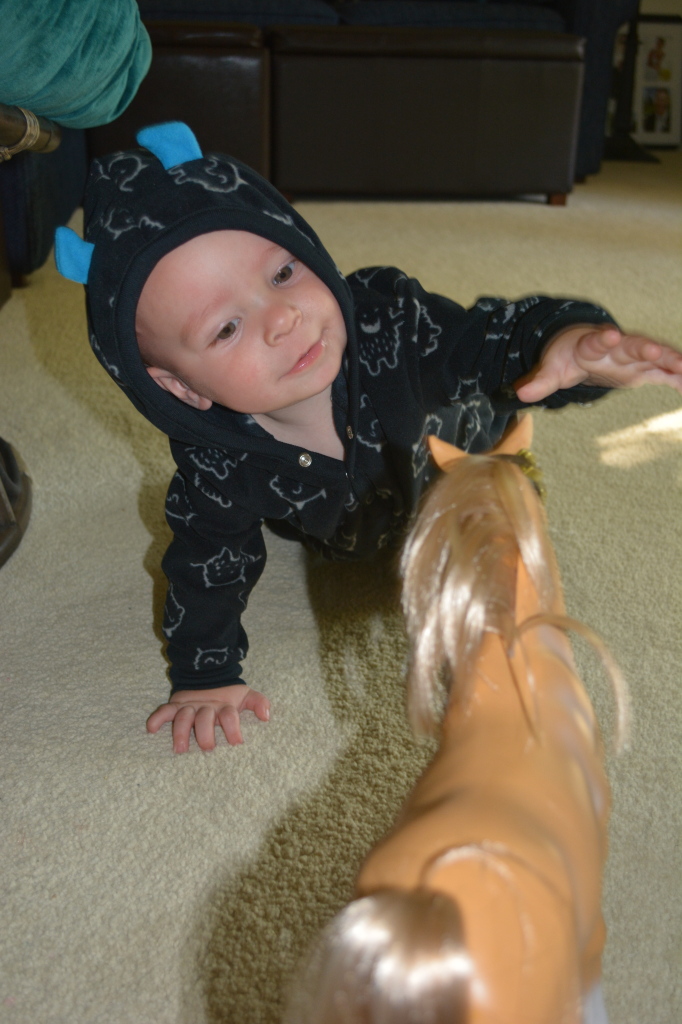 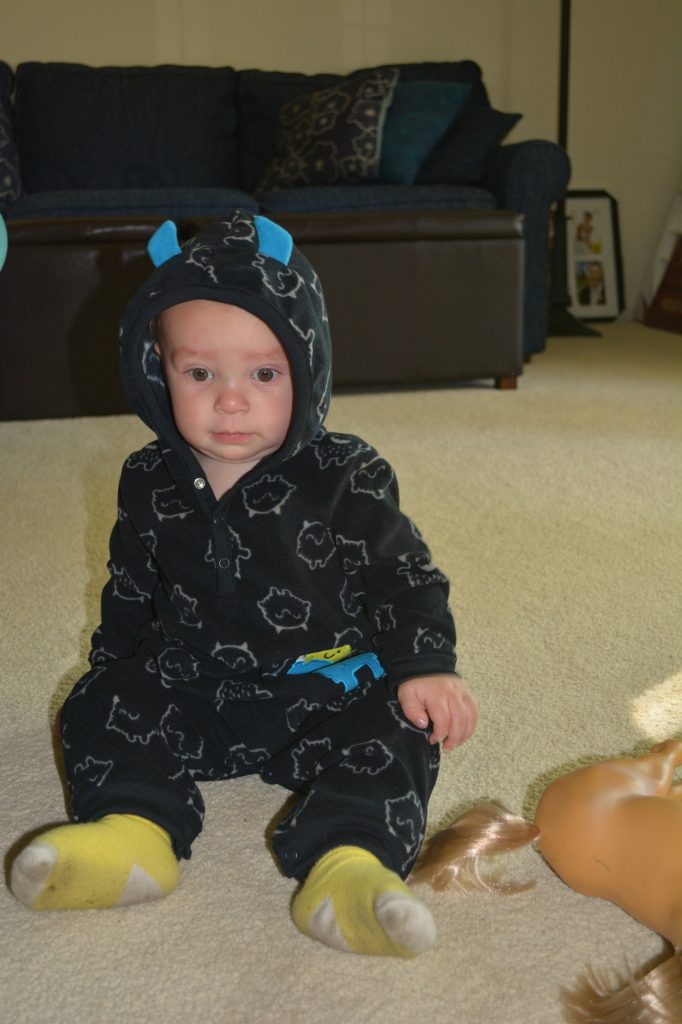 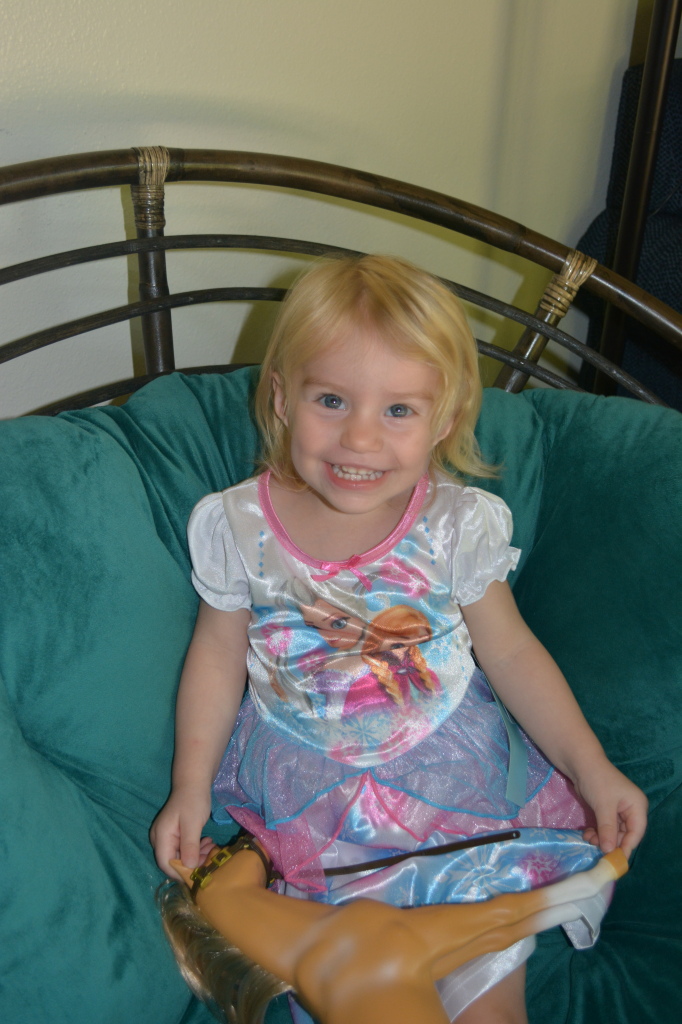 My husband — and his sense of humor — has taken it upon himself to teach Lainey to say, “Relax, Mama Bear!” whenever I’m having a moment of stress… when our older boys are trying to beat each other up… when nobody’s doing their chores and the house looks like a dump… when the baby pours an entire box of cheerios all over the kitchen floor so he can pop two in his mouth and crawl away… “Relax, Mama Bear!” I hear from this little peanut voice, whose head barely rises above the table. Thanks, honey.

We made it to church Wednesday morning… Wesley’s class was in charge of mass, and, like a good mom, I couldn’t miss him singing in the choir and carrying the gifts up. However, soon after we arrived, I had to take Lainey to the back of church because she wouldn’t stop waving and screaming, “Hi Wesley!” Seeing her own brother up there in the choir was just too exciting.

The back of the church was a reprieve for a moment, until Lainey took her shoe off and threw it a good 20 feet down the stairs (all in full view of the priest). Tristan chose this moment to trip and face plant into a flower pot. He didn’t seem to be bothered, and I didn’t notice he damaged himself until he was walking around for a couple minutes with his face full of blood. I was already looking like a stellar parent here — now I was raising Rocky Balboa with his mouth pouring blood toddling down the church aisle.

The next time I turned around, Lainey was letting Tristan out the back door of the church. She escaped as well, and started chasing him down the sidewalk. She was chasing him, I was chasing her, the circus looked to be in town, then I caught them both. On the way back into church, Lainey almost dumped the bowl of holy water on her head trying to bless herself. She got some water on her hand, patted the top of her head and yelled, “Father spirit!” (Her version of The Sign of the Cross — in full hearing range of the congregation.) The holy water was such a delight that she continued to dip her hand in it, smack herself in the head and yell, “Father Spirit!”

Remind me to thank my husband for our daughter yelling, “Relax, Mama Bear!” at me in front of the whole church.

A few more minutes passed and she tried to send her brother away on the elevator. Tristan wasn’t paying too much attention to her bossing him… “Come, Tristy!” …but as soon as the elevator door opened his eyes lit up and it was a mad dash to get on. As Tristan tried to board the elevator, Lainey took off sprinting up the center aisle. It was the end of mass, and a good thing the priest wasn’t doing a full exit procession, or she would have crashed directly into him and the altar boys. Mother. Of. The Year.

In trying to count my blessings… at least she didn’t attempt going down the stairs to the dark church basement. She told me a dragon lived there (no idea where she got the notion from, but I wasn’t about to tell her any different). Also, Wesley knew I was there supporting him — in spite of his little sister’s antics. Two blessings. Breath in. Breathe out. Mama bear is stressed out.

The other night, I was again stressed because I accidentally shipped the kids’ Halloween costumes to our old house in another city. I had a migraine. Also, I hadn’t finished writing the second half of our wedding thank-you cards (we married in a civil ceremony, then had a church wedding and reception recently). “I have to get these done, Chris!” I told my husband. “Instead of knowing that I have four children and every time I sit down to write thank-you cards, they start climbing on me and needing things… people are going to think I’m rude and not thankful and I don’t even send thank-you cards!” It was a disaster in the making. Finally, all the kids were in bed, then I ran out of thank-you cards… so my husband volunteered to go to the store. He thought he was terribly funny when he came home with this… 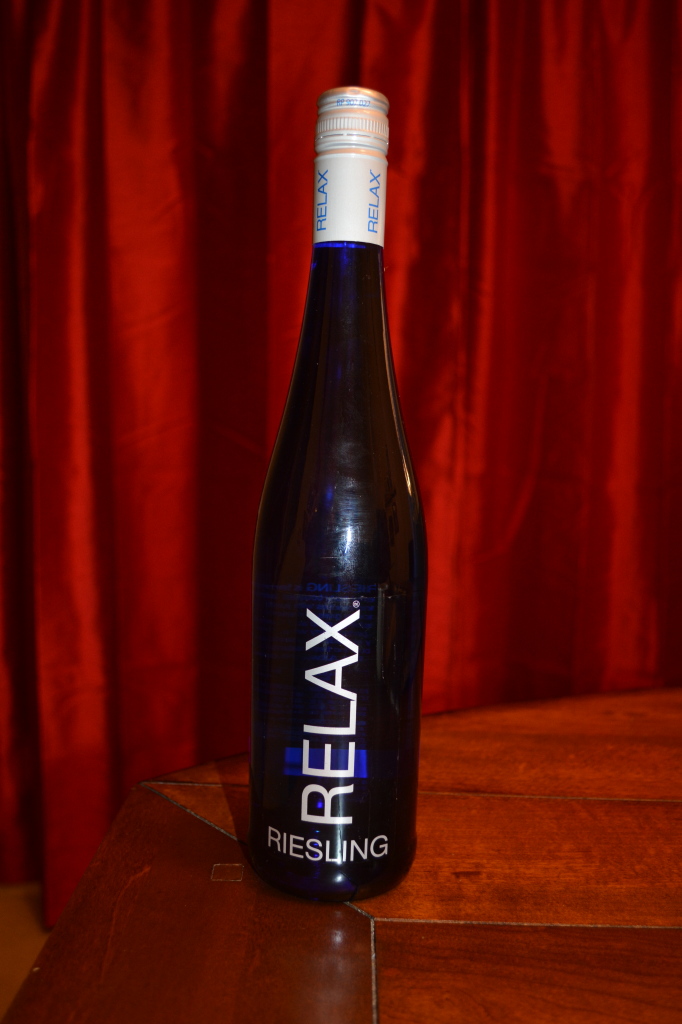 Is he trying to kill my brain cells?! Dead brain cells… another thing to worry about…