I’m Your Mother, Hear Me Roar

I was up until 12:30am working on my computer last night.  This morning, I woke up, fed a toddler and a baby, took my 7 year-old to school (thankfully, he can feed himself… well, there were empty oatmeal wrappers all over the counter, and one bag of oatmeal he had ripped open though not eaten, but I did not have to spoon the oatmeal into his mouth, so it counts!)… then I came home, put the baby in his swing and the toddler in her crib with toys so they would both be amused long enough so that I could shower.  They were not amused.  But their lungs got some exercise, and I was able to wash my hair.  I did not have time to dry or brush my hair, but I’m used to looking like Cousin It these days.

I then packed the baby and toddler, and diaper bag back into the car to go to a doctor’s appointment.  If you have never packed a baby, a toddler and a diaper bag into a car for a trip, I’ll elaborate for you.  Imagine carrying three quarters of your house out the door with you while one of those quarters screams, “No coat!  No boots!  No go!”  One quarter of your house then tries to struggle out of your arms because that one quarter house is determined to stay home.  Meanwhile, half your house becomes high risk for being dropped down the steps along with the surly quarter who has spotted her sippy cup in the diaper bag and is now screaming, “Mine!” in addition to struggling.  Then the quiet quarter of your house in his car seat has a plumbing malfunction.  You must go back inside with three quarters of your house and fix the quarter that malfunctioned with supplies from the quarter that thankfully is inanimate (though awfully heavy).  Then begin again carrying three quarters of your house back outside.  If I am ever less than 10 minutes late somewhere I call it a success.  My husband doesn’t call it a success, but I told him that when I want to know what he calls things I’ll ask.

After the doctor, back home to feed the babies lunch, then to my friend’s house so she could babysit while I went to physical therapy (car accident 7 months ago).  Then pick the babies up from the sitter.  Then pick the older boys up from school.  Then after school snack.  Then pile the babies and 7 year-old into the car to drop the 7 year-old off to snowboard with his friend.  At this point, my 12 year-old wanted to stay home rather than drag around with his siblings.  I agreed, but left him a couple chores and told him to do his homework.

On the way home from the snowboard hill, I had to stop at the grocery store.  My toddler screamed “HI!” at everyone our cart passed and sang the “Because I’m happy” song over and over.  Fortunately, this entertained the baby for the duration of the shopping trip… unfortunately, everyone in the store knew when our cart was within 100 feet of their vicinity and turned to stare. After I paid, my toddler screamed, “BYE!  BYE!  BYE!” to the whole store.  Then she screamed because she didn’t want to go in her car seat.  (Out of 4 children, she’s my only girl.  Someone should have warned me about the high pitched screams of toddler girls…)

I arrived home and my 12 year-old had not done his homework.  He had not done his chores.  He was watching Pokémon cartoons as he lounged on the couch and had eaten the entire CARTON of goldfish crackers — the ones I use to pacify my toddler.

Then I turned into a Tyrannosaurus Rex.  (For my neighbors who wondered about the hole in the side of our house).

You would think my scientific brained son would appreciate it that his mother can turn into a Tyrannosaurus Rex.  He doesn’t.  But I’ve never seen the garbage taken out faster.

The positive aspect about turning into a Tyrannosaurus Rex is that  a T-Rex doesn’t say much — they just roar, and people know they mean business.

Choose carefully when you’re angry… or “make the best speech you’ll ever regret.” 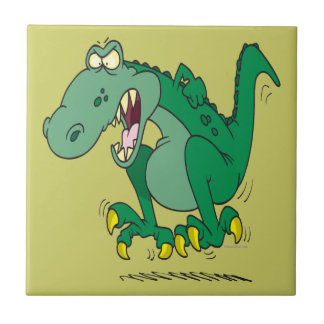 2 comments on “I’m Your Mother, Hear Me Roar”