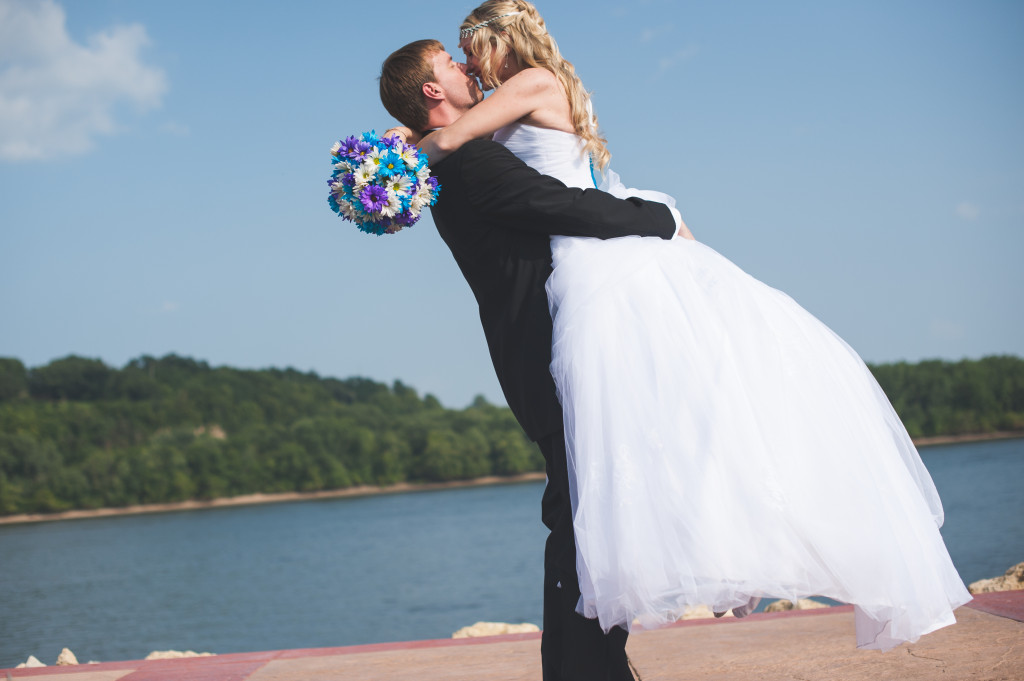 We married in a civil ceremony a few years ago, and recently had a wedding in our church, with all four of our kids in the ceremony. In the months leading up to the wedding, life was a little hectic. We took a family snowboarding trip to the mountains, moved to another house in another city, and parented four children. If you’ve ever tried to put together a wedding ceremony and reception while parenting four children (come on, who hasn’t done that?), you quickly find that you have no time for planning. Just two weeks before the wedding, we still hadn’t chosen our music. It was after 12am on a weeknight. We couldn’t agree about which song I should walk down the aisle to.

“How about I sashay down the aisle to ‘In the Hall of the Mountain King’ by Edvard Grieg?” Chris looked at me as though I was half insane. I pulled the song up on my computer and hit play. “It would be kind of perfect. I could turn into a whirling dervish at the end, and you know… my dress is so perfect for whirling.” I twirled around in the kitchen a few times so he would get the full effect.

“You do remember our ceremony is in a Catholic Church, right?” Chris reminded me.

Chris could only imagine the horror of standing at the front of the church waiting, while his bride made her entrance to, “Well you’re a real tough cookie with a long history… of breaking little hearts like the one in me… that’s OK, let’s see how you do it… put up your dukes, let’s get down to it. Hit me with your best shot!”

“Our deacon will not approve that song,” Chris stated. He was beginning to worry that I really might walk down the aisle to one of the aforementioned tunes. We settled on “1000 Years” by Christina Perry, and Chris breathed a sigh of relief.

Another evening shortly before the wedding, Chris was practicing lifting me into the air for part of our Grand March. We were really going to make an entrance at our reception. I figured either Chris would lift me – giant marshmallow poof dress and all – making ours the coolest bride and groom entrance to a reception ever… or he would drop me on my head, making ours the most unfortunate bride and groom entrance ever. I was kind of afraid of the latter. He was doing pretty good lifting me in our living room… but that was without the marshmallow poof dress. I was also only getting half my practice time, as our two year-old daughter insisted upon having every other turn to be lifted and twirled by daddy to herself. Chris was delighted to lift something lighter than a woman who’s given birth to four children, and did not mind our daughter hogging half the practice time. Okay… it was pretty cute seeing him lift Lainey into the air as she yelled, “Lainey’s a princess, too!” But I needed my practice time.

After she went to bed, I again prepared to run at my husband. He told me I looked like a bull about to charge. I told him it was very important to practice getting enough speed to launch all layers of my wedding dress airborne. One, two, three – CHARGE! And the phoenix takes flight!

I couldn’t stop smiling at how great we had pulled off the lift on that last practice run. I reached up to give my partner a hug. Very far up. Chris is six foot four and I am five foot two. “Do you think you’ll still be able to lift me when we’re sixty?” I giggled at him.

“Yeah… if you haven’t killed yourself in a snowboarding accident by then.” Touche.

Our big day came. It started out kind of rough. The vocalist began the music before my bridesmaids and I were ready, so we climbed the steps from the church basement – where we’d been dressing – in a mad dash. We forgot the ring pillow in the process, but our 8 year-old son, Wesley, remembered to carry his baby brother (and fellow ring bearer) down the aisle… Wesley even remembered to put baby Tristan’s binky in his mouth, which was much more important than the ring pillow! 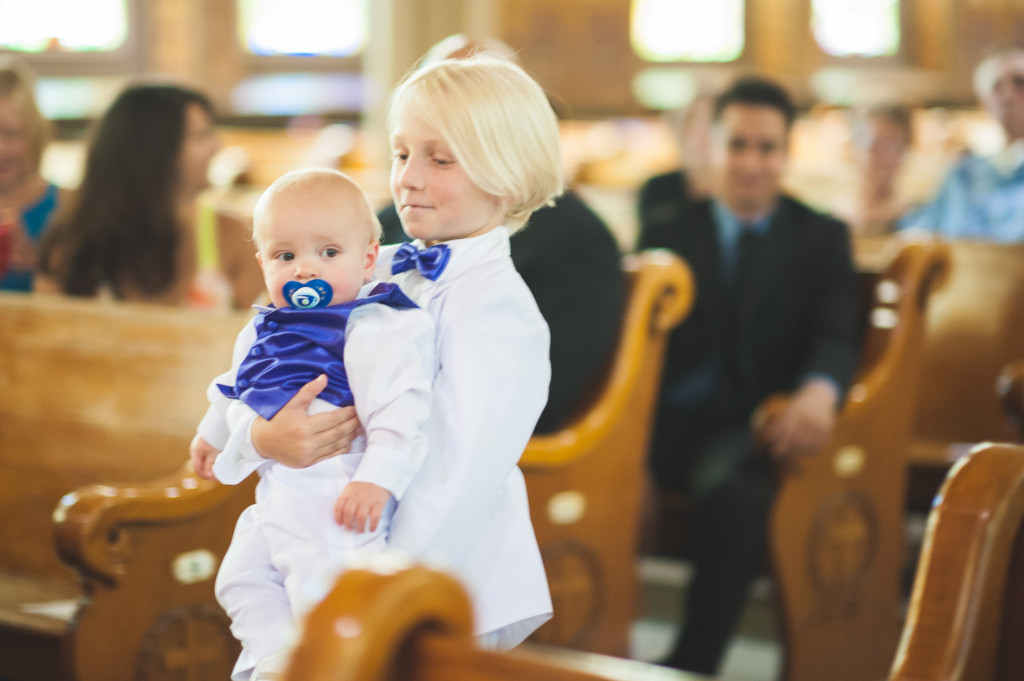 Devin, 12, was a proud groomsman, and 2 year-old Lainey – our flower girl – made it down the very long church aisle all by herself. She only stopped a few times to inspect carvings on the sides of the wooden pews and specs of dust on the floor. 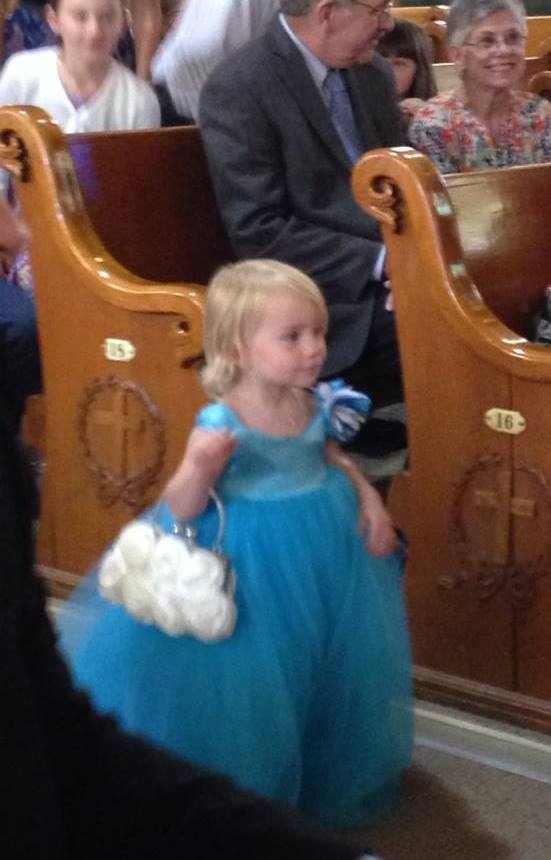 “I, Danelle, take you, Christopher, to be my husband. I promise to be true to you (words I forgot… words I forgot) in good times and bad. I will love you and honor you all the days of my life,” was what I said instead.  I have to admit it was beautiful. I don’t think anyone but Chris noticed that I messed up my vow. His eyes were twinkling down at me. He had told me all along that I didn’t spend enough time memorizing my vow and I was going to forget it. 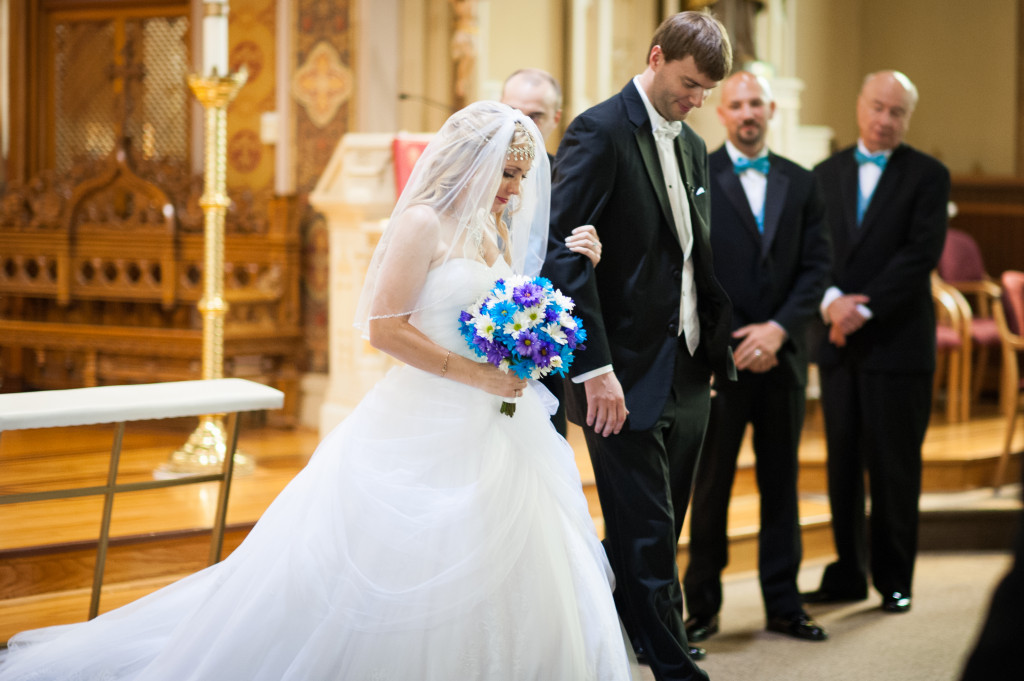 At the reception, Chris managed not to drop me during our lift, despite my many layers of petticoats. My little sister toasted to me and my keen sense of adventure. My dad toasted to me and called me a rule breaker… then said maybe Chris would straighten me out. Chris’ brother toasted to him, and told everyone the story of how Chris swore up and down the entire time he was growing up that he was never going to marry or have kids.

The stuff fairy tales are made of. 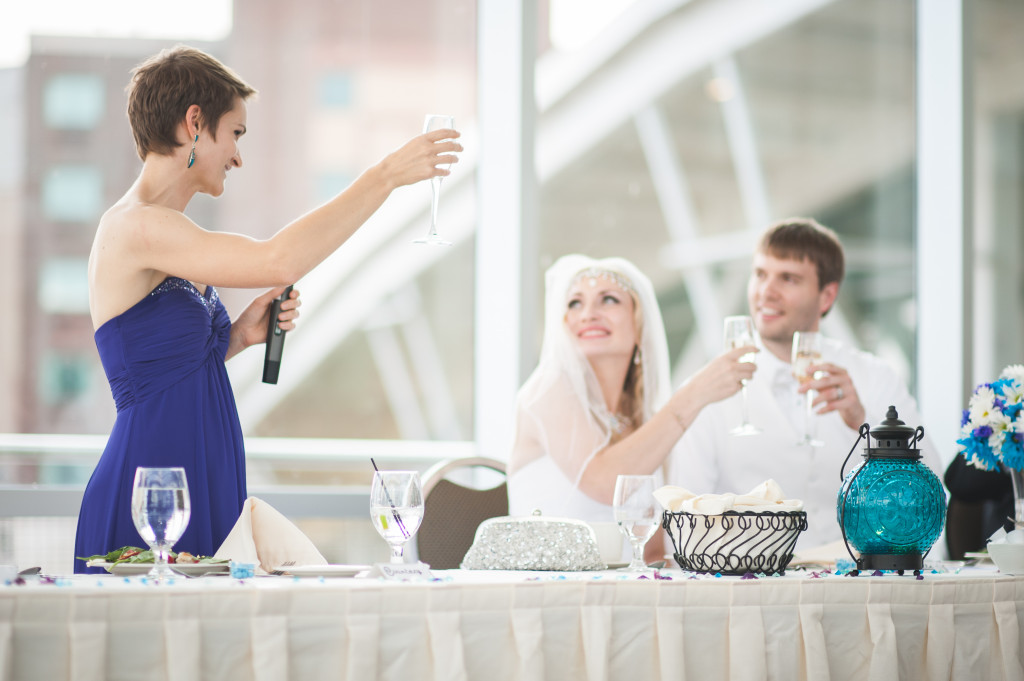 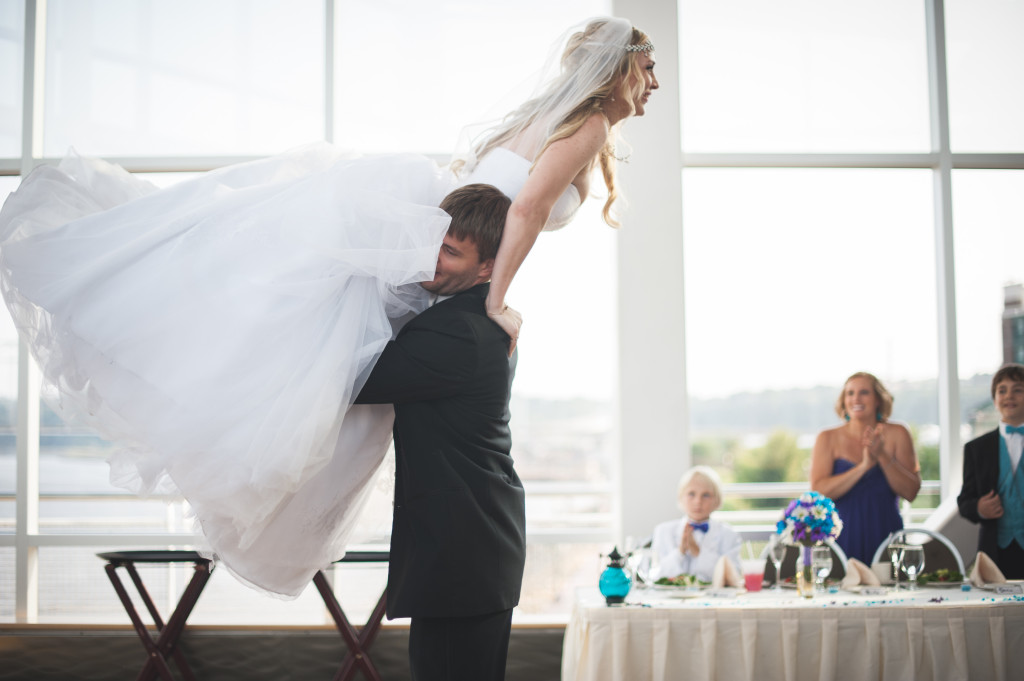 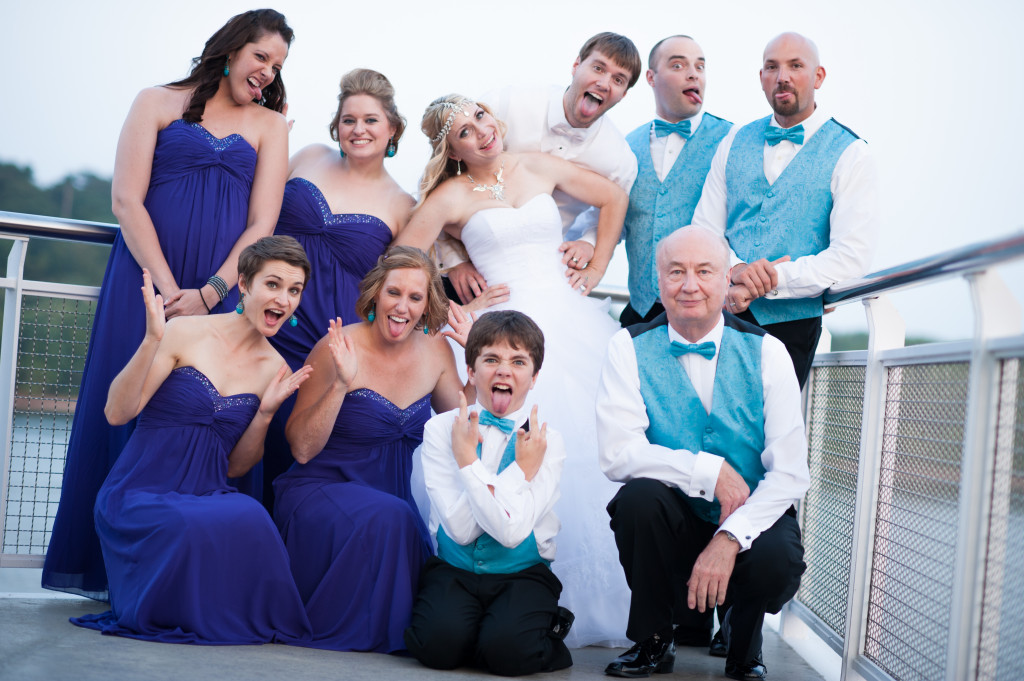 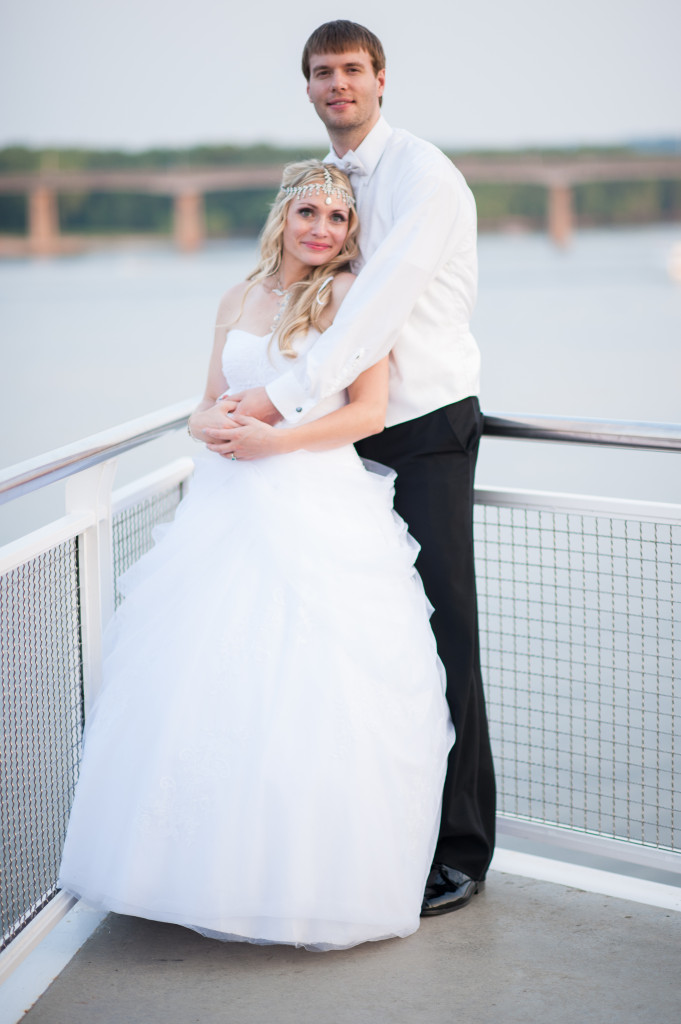 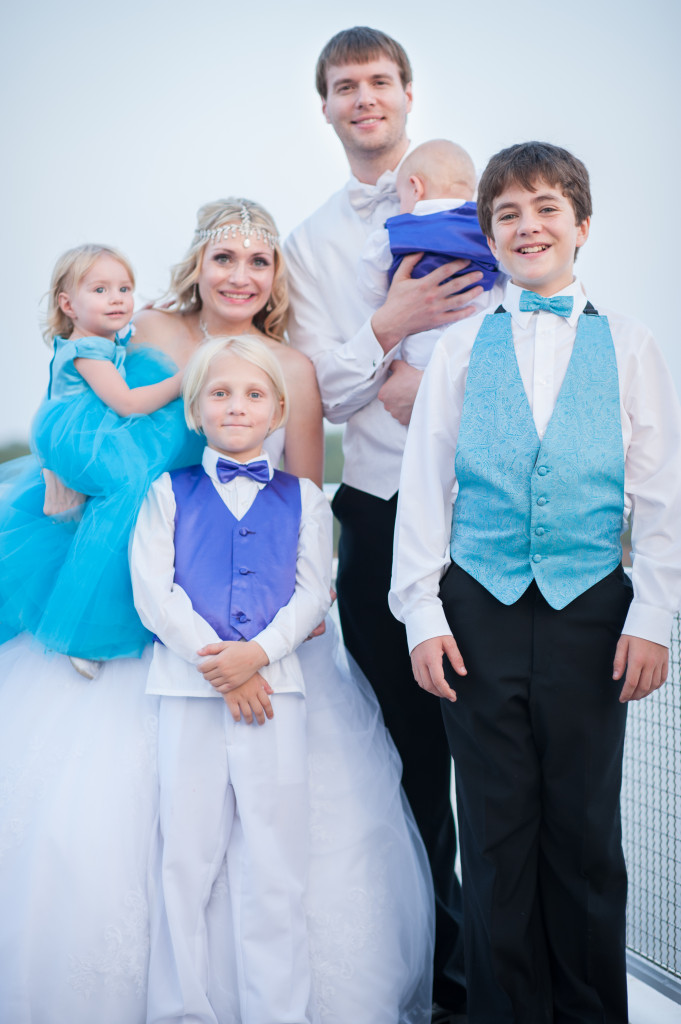