danelle Posted in Marriage — No Comments ↓

I love it when my husband surprises me or plans something — although I don’t know if he’s caught on to that premise yet. It doesn’t have to be an expensive or grandiose surprise… just the idea of knowing he was thinking about me and planning – that’s the part that makes us women feel special.

We traveled to my hometown of Sycamore to visit my parents and celebrate my birthday last weekend. It’s quite a project packing our 4 kids — and all their kid paraphernalia — into our vehicle. As we were finishing the last of the packing up Friday afternoon – the day before my birthday — my husband mentioned that he had thought about getting me a comfortable office chair (to go with my new used desk) OR he had found a place that does hot cold stone massages.

“Okay,” I responded and went about my packing. I don’t really like picking out my own surprise. I want him to read my mind and know exactly what surprise he should plan (the one I’ve been dreaming of but haven’t told him about because if he knows me he will figure it out), and then I want him to plan it on time. It’s not that hard. I can’t fathom why men dread birthdays and anniversaries.

Everything (kids included) was finally loaded into the vehicle, and we set off on our three hour road trip. Our kids were thrilled after the 3 hours were up, when they found out Mom and Dad had taken the wrong exit and it would be another hour before we arrived at their grandparents’ house. We weren’t sure who exactly was to blame for this detour (I say him because he was driving and he says me because I was supposed to know the way), but the thought of an extra unnecessary hour in the car with four kids was making me really grumpy.

My mood was alleviated as soon as we arrived at our destination and smelled the yummy food my mom had waiting for us. I went to bed with a full, happy tummy. Tomorrow was my birthday. I drifted off to sleep.

I was racing my kids down Peak 8 at Breckenridge. A snowstorm was in full force, and I loved the feeling of cutting through the fresh powder. It felt like floating. Maybe that’s why I love snowboarding. It’s the closest I’ve ever come to flying. Then I WAS flying. Way up into the sky and then back down to cut through the powder, and then I would jump back into the sky again. I don’t know what they did to Peak 8 since the last time I was here, but it’s awesome! I was airborne again. Suddenly, something grabbed my hair and painfully yanked me back to the ground.

I opened my eyes to see what had me in its grasp. It was really dark. “AHHHHHHH! You’re hurting meeeeeeeee!” I yelled, then realized that something was pinning my hair down.  Something was my husband. “Get off me! OW! Right now!”

“What are you trying to do to me?! GET OFF MY HAIR!” I realized I’d skipped weaving my waist length hair into a braid before bed last night.

He rolled the other way. “I was trying to snuggle you on your birthday. I know how you like to be snuggled.”

“It felt like you were instigating my slow and painful death,” I grumbled. As if the day I officially turn a year older wasn’t enough to make me grouchy. (For the record, I love being snuggled, but I’m very sensitive about my hair being pulled!) I closed my eyes and made my way back to my flying snowboard and a few more hours of sleep.

By lunchtime that day, my husband had neither mentioned a birthday surprise, nor given me one, and I was beginning to think he really believed that thinking about surprising me counted as actually surprising me. “So you thought about getting me an office chair?” I inquired.

Chris looked at me like he wasn’t sure he should participate in this conversation. “Actually, I went in a store and looked at office chairs. And I found a hot cold stone massage place.”

“By ‘found a place’ you mean that you did an online search for one?”

Chris laughed. That was a yes.

“You didn’t plan anything for my birthday, did you?” I was getting sad. It’s miserable enough for a woman to have a birthday, without feeling like she’s not important as well. I couldn’t stop my mouth from running on… “I plan everything. I want somebody else to plan something for me. I want it to be planned on time – not a week later. I would rather have a five dollar pair of earrings that you picked out and put some thought into… than for you to tell me you were thinking about getting me a chair sometime.”

“Hey… some of those office chairs cost a lot of money,” he replied.

“You thought about getting me a chair that cost a lot of money. I feel so much better now.” My mom walked into the room. “Mom, don’t you think an office chair is a guy gift? Chris thought about getting me an office chair. That’s not a gift for a girl.” My mom smiled and agreed with me… then she told us about the time my dad bought her some cooking supplies as a gift. I guess my dad was really excited and thought he found the perfect thing. My mom… not so much. Chris and I were laughing by the end of the story.

“Baby… I like jewelry. And… jewelry. And, if you can’t think of anything… jewelry!” I smiled. Chris laughed some more. “Since you didn’t plan anything for my birthday, I’m going to take the boys downtown to the confectionary with me.” I went outside to get the boys.

I was back inside a short time later. The boys did not want to go to the confectionary because they were busy playing Capture the Flag with their cousins. I couldn’t even bribe my own children with candy to do something with me on my birthday. This birthday sucked. I grabbed Chris and told him he was going along with me downtown because I was going to do something today.

I hadn’t been in downtown Sycamore — a cute little street full of shops and businesses – for probably ten years. As I pointed out some of the shops, I told my husband the history of their significance. The bakery where my cross country team liked to pig out on doughnuts. (We all ran so much we could eat what we wanted.) The confectionary… the best candy around, and I had to have some (no, I can’t eat whatever I want anymore, but it was my birthday). Then I told him about the handmade jewelry shop, and how – when I was in middle school – it was the cool thing for a boy to buy the girl he liked a necklace with “his and her” initials… and that no one had ever bought me one of those necklaces. I’m still holding that against the universe.

It’s a rare occurrence that Chris and I are out and about together without children, and it was nice to spend time with each other. Also, we purchased some chocolate from the confectionary. Heavenly.

That evening, I got dressed up for the six of us to go to church and then out to dinner with my parents. 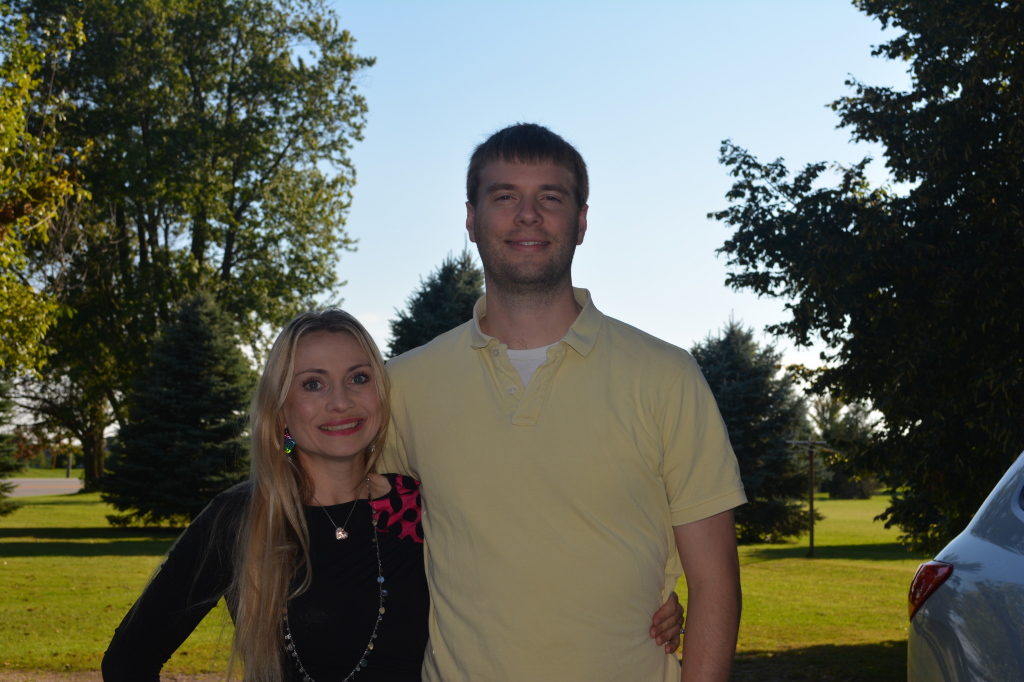 Normally, I come up to somewhere around Chris’ lower ribs. Once or twice a year, in my six inch high heeled boots, I manage to make it up to his shoulder.

After mass, our kids were running around on the playground as we were trying to corral them back to the car. I remembered why I don’t ever wear heels. 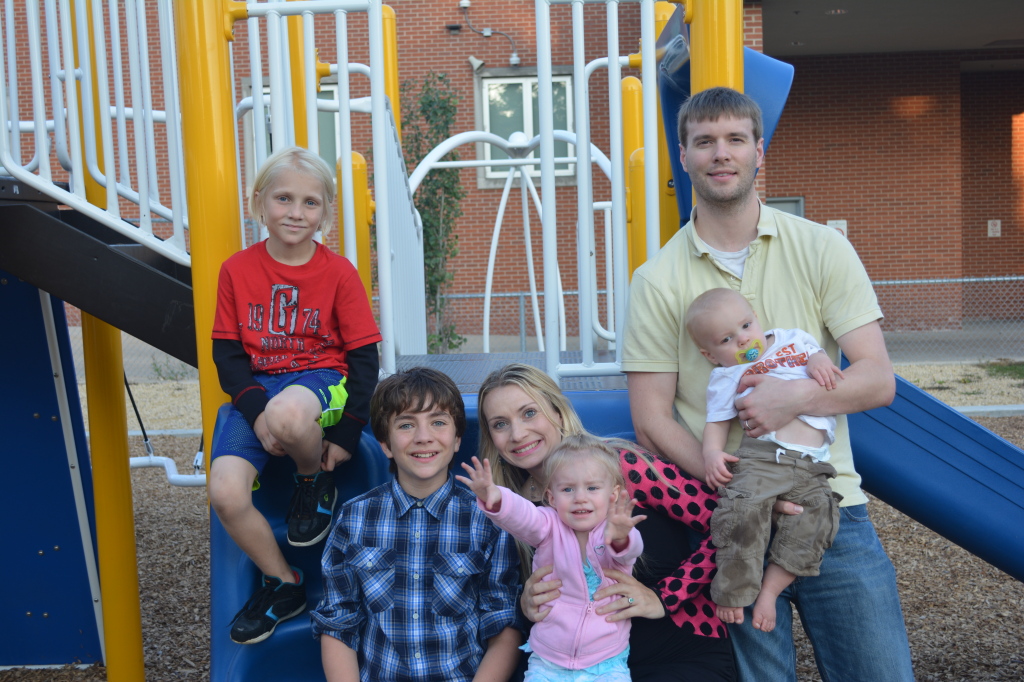 Bea’s Wok N’ Roll is my parents’ favorite restaurant, and serves the best Vietnamese cuisine I’ve ever had. I love going there when I visit home.

We finished dinner and went back to my parents’ house. My mom had baked my favorite – yellow cake with her homemade white frosting. I don’t know what happened to the candles, though. They must have gotten reversed or something? (I turned 19 last year, and I’m turning 19 again this year. A couple years ago, Chris actually put “Happy 19th Birthday” on my cake. What a great husband!) 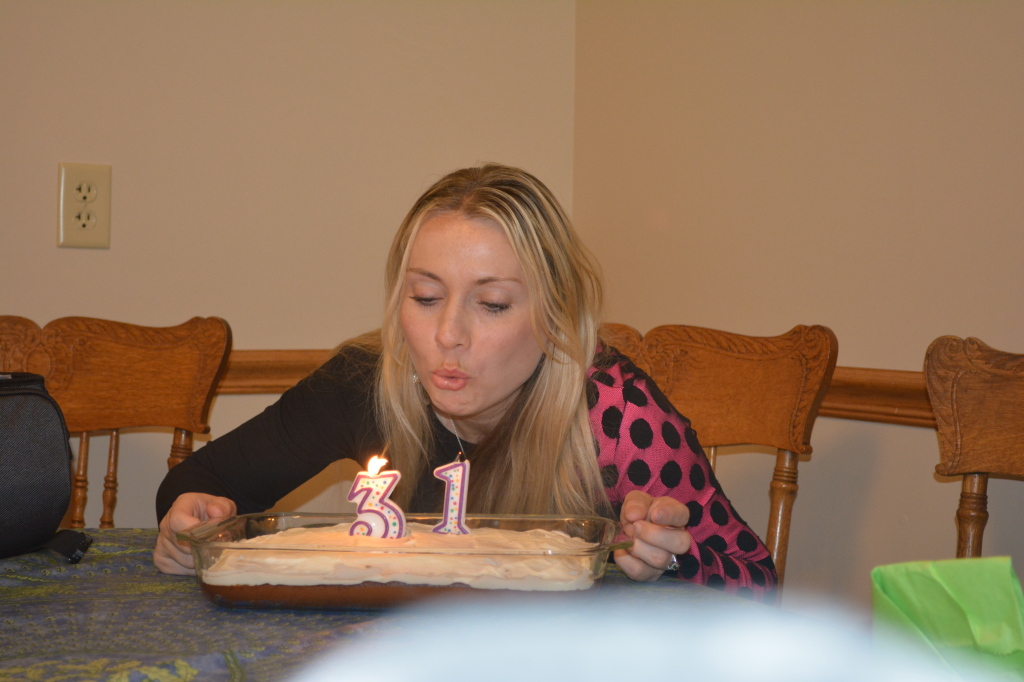 Chris gave me this… 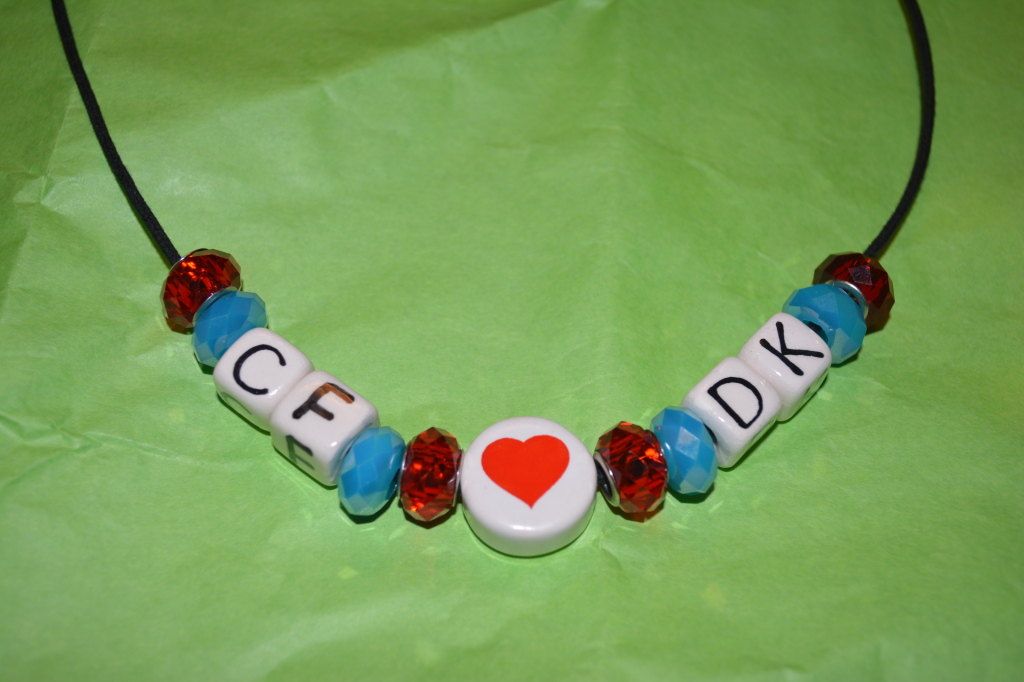 Along with some earrings that cost more than $5. (I know this because he forgot to take the price tag off.) He said he’s getting me a comfy office chair next week — whether I like it or not — because I spend so much time sitting down writing at my computer, and he doesn’t want my joints and back negatively affected. Well… it’s really sweet and kind of romantic when he puts it that way. I like it.

I’m getting a romantic office chair for my birthday. And I’m now the proud owner of a “his and hers” initials necklace. (I love it!) I’ll have to find something else to hold against the universe 😉