danelle Posted in Funny — No Comments ↓

Nothing makes me more neurotic than cleaning our house up to try to sell it.  (Okay, a few things probably do, but I can’t think of them because I’m so neurotic right now.)  We had a showing scheduled for Saturday morning.  So naturally I was in neurotic cleaning mode Friday evening when my husband, Chris, came home from work.

I make lists.  It’s what I do.  There is nothing more satisfying than crossing something off my list when I finish it.  Chris has tried to get me to use Word documents or Excel spreadsheets instead of paper — to no avail.  I NEED my lists.

I was furiously scrubbing mud out of the carpet (some snowboard boots had forgotten to deposit themselves by the front door upon entering the premises) as Chris put his coat away and then picked up my list off the dining room table.

Chris started to laugh.  It really wasn’t funny.  Nobody wants to buy a house with an attic that might be harboring a dead body.  Chris wanted to know what he was supposed to do about a dead body smell in the attic.  I told him that’s why he’s a husband and I’m a wife and husbands take care of things like dead body smells.

“I’m sure it’s not that bad and nobody will notice,” he reasoned.

“Have you ever smelled a dead body?!  It is the last smell on EARTH no one would notice!  Besides, I’ve located the origin.  It’s coming from the wall on the side of the attic steps.”

“So what do you want me to do?  Start ripping the drywall open with a crow bar?”  Chris wanted to know.

“Husband job.  I don’t care.  I don’t want my attic smelling like a dead body.  And if you rip the dry wall out, you have to repair it before tomorrow morning.”

9. Take hampers down to basement

Chris was laughing again.  You see, this bag has been my nemesis for 6 months.  It began as a bag of yard waste that we forgot to put out for collection.  Then it sat by the front corner of our house for a few weeks and got rained on, becoming too heavy to move.  Then it snowed and the bag froze.  Then the snow melted and it ripped in half, the contents spilling into a pile on our brick patio.  Every time I get in my car and drive away from our house and every time I return home I glare at that bag of crap.  But I’m a good wife so I haven’t nagged my husband about it.  Did you ever take really good care of the rest of the yard work but there’s one thing that neither of you wants to touch?  That bag has become our one thing.  The two halves of the split bag have even managed to drift apart now and look like two separate piles of crap.  Now we really look like lazy bums!  One pile of crap in front of your house might be acceptable.  Two piles is pushing it. Our neighbors probably want to burn a pile of crap on our front porch.

Well, I didn’t have time for laughing about piles of crap.  I had things to clean.  I was running all over, cleaning products in hand, barking orders to my husband and kids.  Then I had to stop and tell my husband how to use the vacuum.

“You have to adjust the vacuum height to match the height of the rug or you’re going to suck the area rug up into the vacuum!”  I was really freaking out thinking about the possibility that he might break my vacuum and I wouldn’t be able to vacuum the rest of my house before people come to look at it.

“Relax… not everybody can be as –”

“OCD?!  I know!!!”  I lamented.  I really could use another family member that’s as OCD as me.  Sometimes, in order to live in a house with adolescent boys, I have to close my eyes and pretend I don’t see the things I see.  Otherwise I could have nightmares about the state their rooms and the bathrooms get in.

My family thinks I don’t know what a kick they get out of me running around eradicating every speck of dirt from our house like I’m prepping to perform surgery in a clean room.  I knew.  I didn’t care.  I had appliances to polish.

Later on, it was after midnight, and I was finishing up shining the floors.

Chris came over to heckle me.  “Do you remember last summer when you were so pregnant and our upstairs bathroom stopped working?”

Did I remember???  It’s the stuff that haunts my dreams.

I was 8 months pregnant with my 4th child during the hottest part of the summer.  (My 3rd and 4th pregnancies were back to back, so I had literally been pregnant for YEARS.)  Our upstairs toilet broke and also leaked through the floor (so it was not a minor fix, the whole floor had to be ripped out and replaced along with the toilet).  I was waking up 8+ times a night to pee and having to walk downstairs to use the bathroom on the first floor.  Then, when my husband and father-in-law put a new toilet and floor in, Chris picked out the tallest toilet manufactured EVER.  Chris is six-four.  I am barely above five-two.  As he was asking me if I liked the new toilet (so proud of it was he), I told him that I might, if my feet could touch the ground while I was using it.  It’s hard enough balancing on a toilet when you’re 8 months pregnant.  Fearing you will tip off the toilet because your husband purchased said toilet from the Jack and the Beanstalk Giant’s estate sale, is what every pregnant woman dreams of… 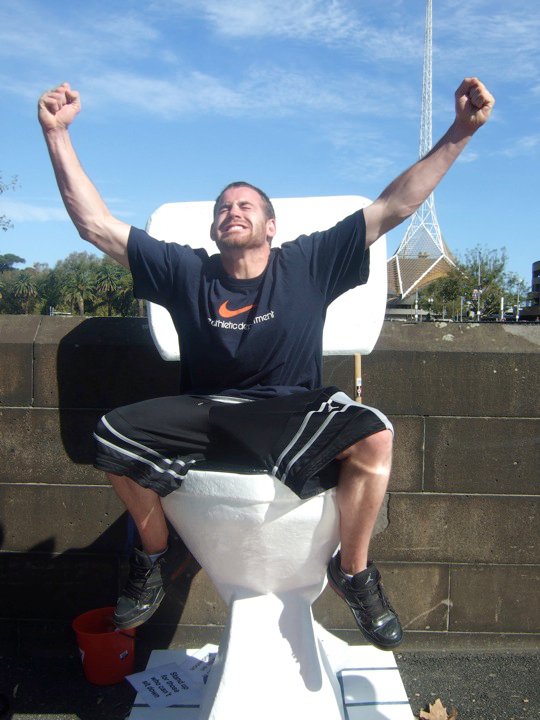 Chris was retelling the story and just getting to the part about how my feet couldn’t touch the ground.  “You were such a cute roly poly short pregnant chub–”

If looks could kill.

Do not tease your wife about what a pregnant chubber she was when she’s shining floors into the early morning hours.   Especially don’t tease her about how she was so roly poly she nearly fell off the skyscraper toilet.  Fortunately, this OCD former pregnant chubber has a sense of humor.

The people really liked our house the next day, and didn’t mention anything about a dead body smell in the attic.  Maybe they’ll buy it.  Of course, it would have to be written into the purchase agreement that the piles of crap in front of the house would be removed from the premises prior to closing… 😉

We’ll sneak the dead body out in the middle of the night sometime before we move.