Home Sweet Home… Until the Mountains

danelle Posted in Family — No Comments ↓ 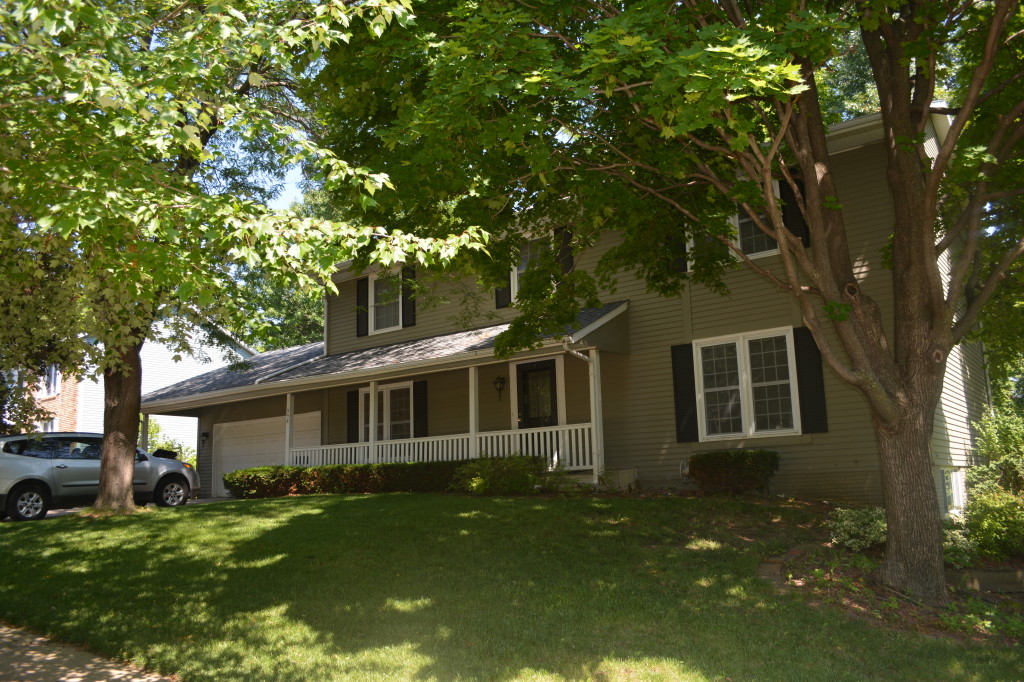 We moved to another city, closer to my husband’s job, this summer. It was very difficult to leave our old house (I’d lived there 10 years and brought 3 of 4 babies home to it). Moving 4 children and the enormous amount of stuff in our house was not fun. But we made it. And we’re — mostly — unpacked. I say mostly because we’ve been here 3 months, and I don’t know when the last boxes in our garage and basement will get sorted through…

We were going to buy a home here… but last year, my husband was almost transferred to Portland, Oregon for his job. There’s a chance he might get transferred in the next few years… and where we really want to be is in the mountains of Colorado or Utah, so — though we looked at many homes, and intended to purchase one — it didn’t seem like the right decision for us in the end.

As we looked for homes to purchase, we had also been watching the rental home market. It was a little depressing. The rental homes with enough bedrooms for our big family seemed to be either older, falling apart houses, in sketchy neighborhoods… or mansions. There was not a lot in between. I was kind of losing hope that we would find a place where we would all fit.

Then, just at the right time, a perfect rental home came along. Plenty of space, good neighborhood, and a really nice yard (I’m crazy about having a nice yard. I love backyards, and probably put more weight on them than houses. Be it because I grew up in the country with acres and acres to roam, or because I love watching my kids play outside… backyards are important!)

As difficult as it was to say goodbye to the first house I called my own… it was time. We were running out of bedrooms… because of the age and genders of our children, having only 3 bedrooms quickly became a logistics nightmare. The two babies woke each other up if they shared (which meant they woke their parents up, too). The two older boys did not want to share. Our 12 year-old became so annoyed about sharing a room with his then 7 year-old brother, that he moved his bed onto the back (unheated) porch in the middle of winter. I thought it was a one night thing for him, but he insisted he would stay out there. So we decided that, if living on a back porch, in the heart of the coldest winter in the Midwest in years — all in the name of having some space — was what he wanted… who were we to stop him? (We didn’t stop him, but we did put a heater out there, and some warm blankets). We now have plenty of bedrooms, and our eldest has his own bedroom/bathroom in the basement. He loves this and calls it his “lair”. He’s so happy to have his own space that he doesn’t even mind cleaning his bathroom.

Our first house had no garage and no off street parking. It was a lovely home with high ceilings and the gorgeous trim and moldings of another era — albeit an era without automobiles. This is the first time we’ve had a garage. I didn’t realize how convenient garages could be! 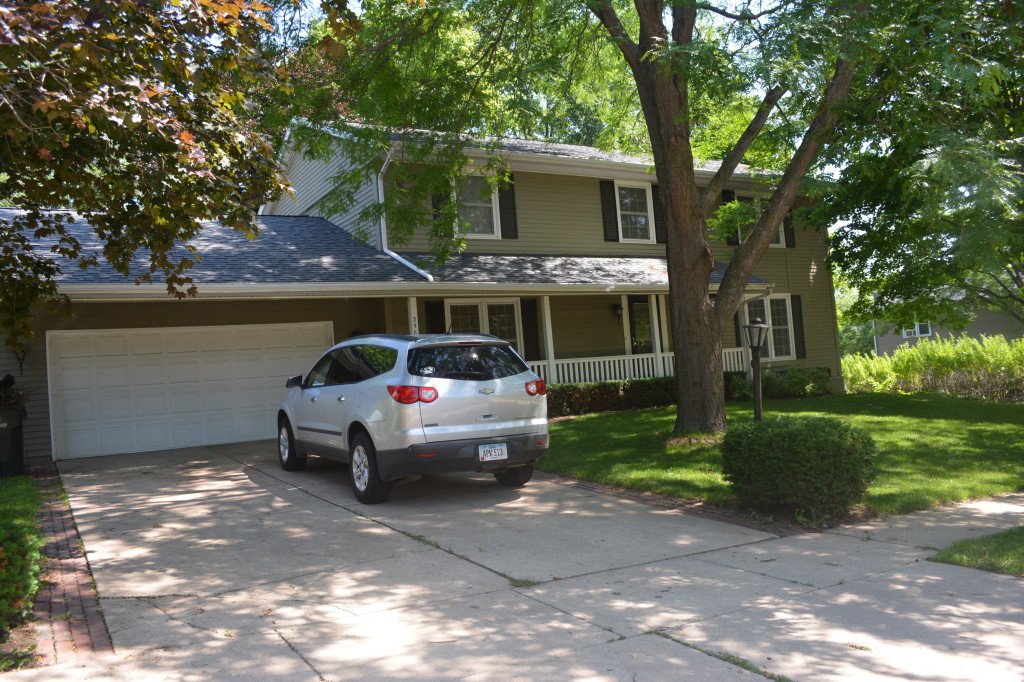 My car is not IN the garage because many boxes are. But I still love having a garage!

The next really cool thing about this house, is this big room on the back. It was at one time a screened porch, but someone enclosed it and put a separate thermostat in… it makes one heck of a toy room… that’s conveniently close to the kitchen/dining area — SO easy to keep an eye on the kids while I’m cooking. 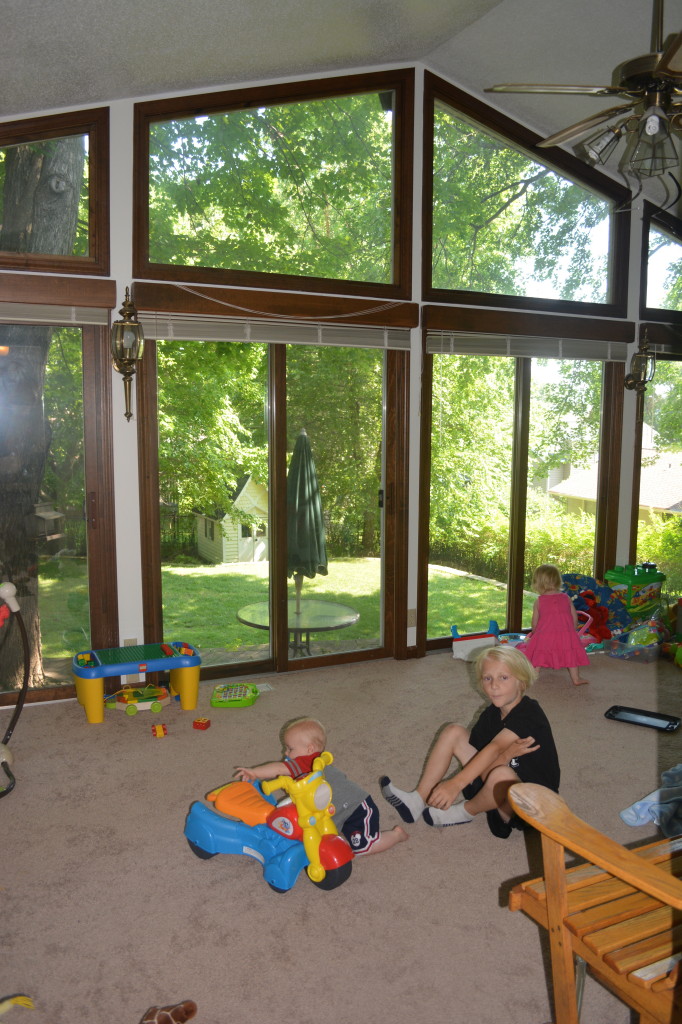 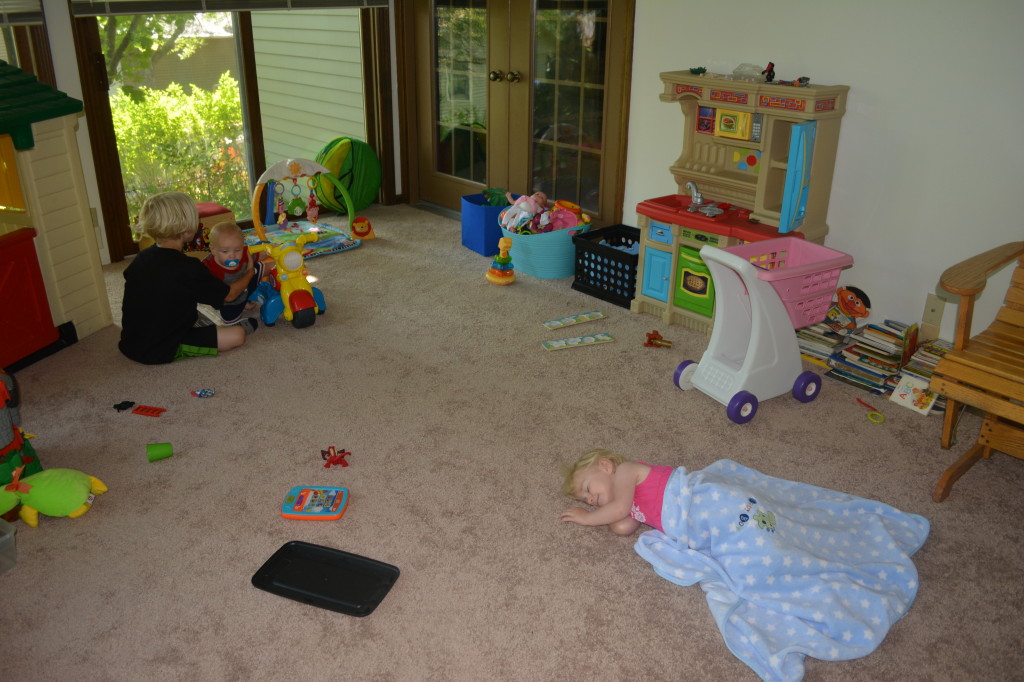 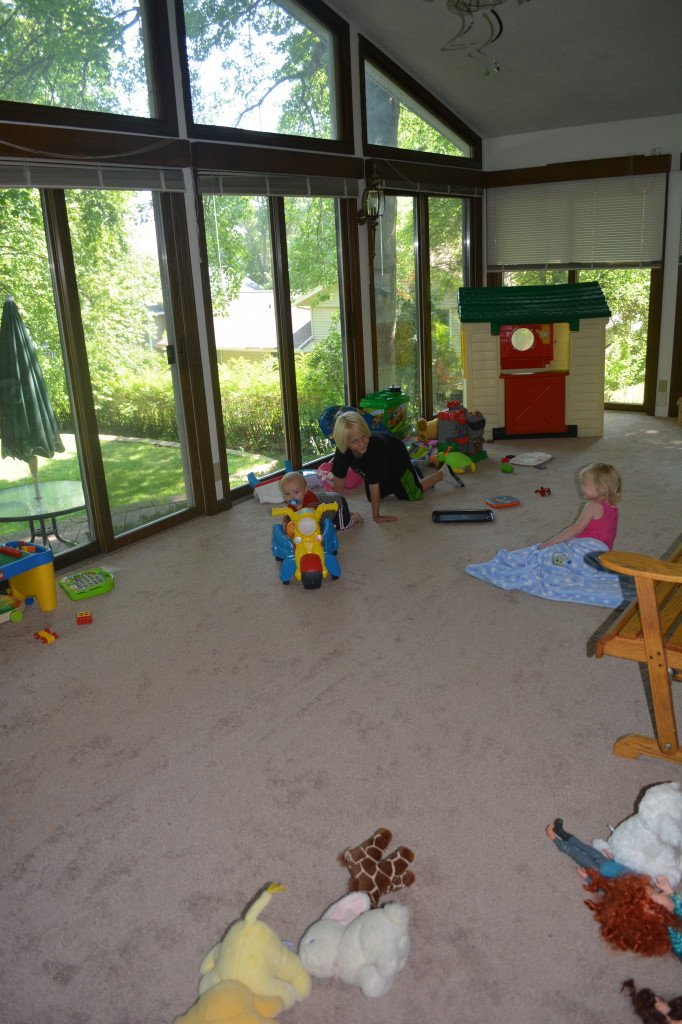 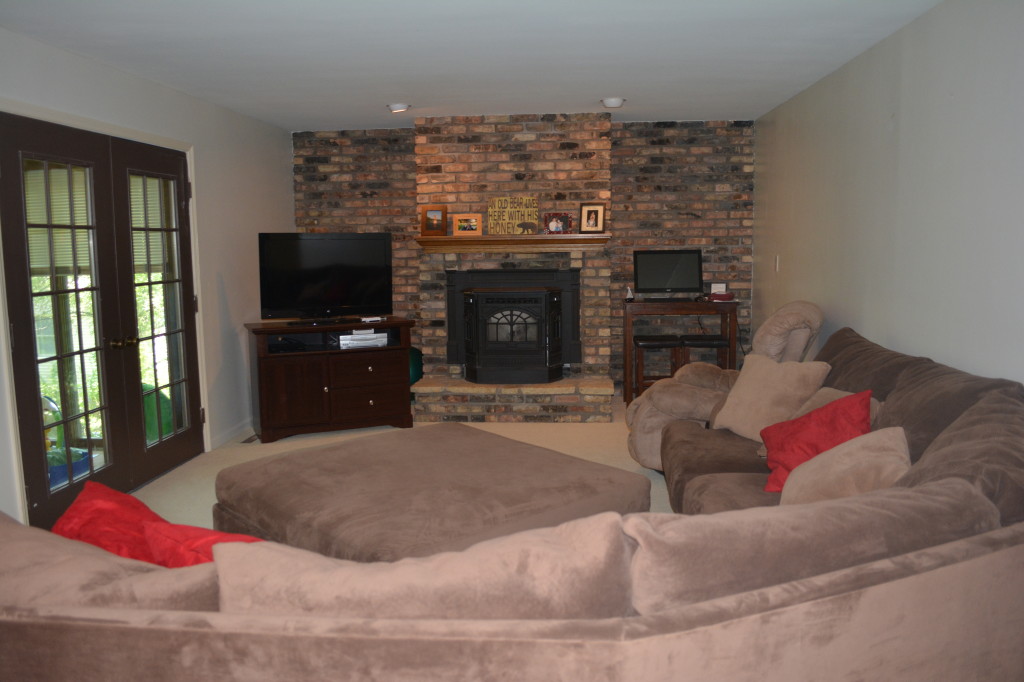 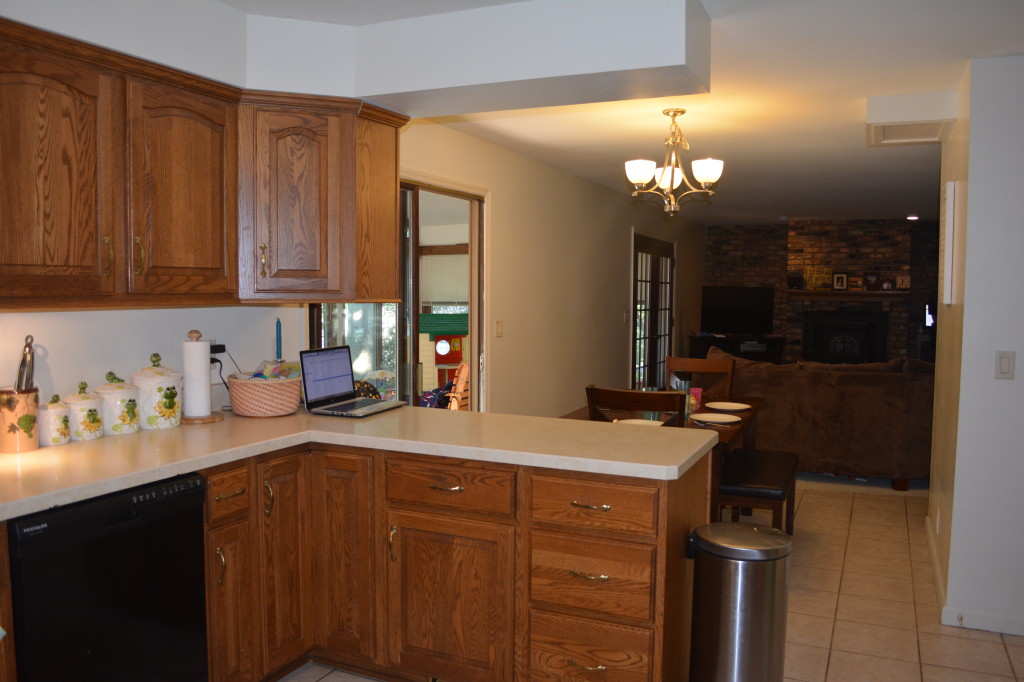 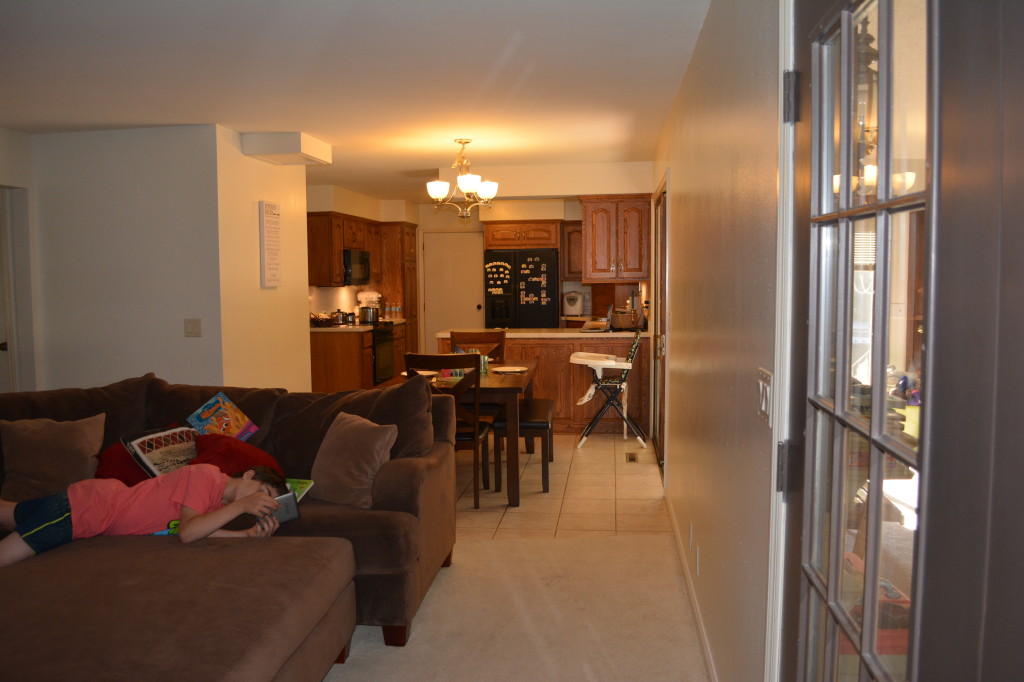 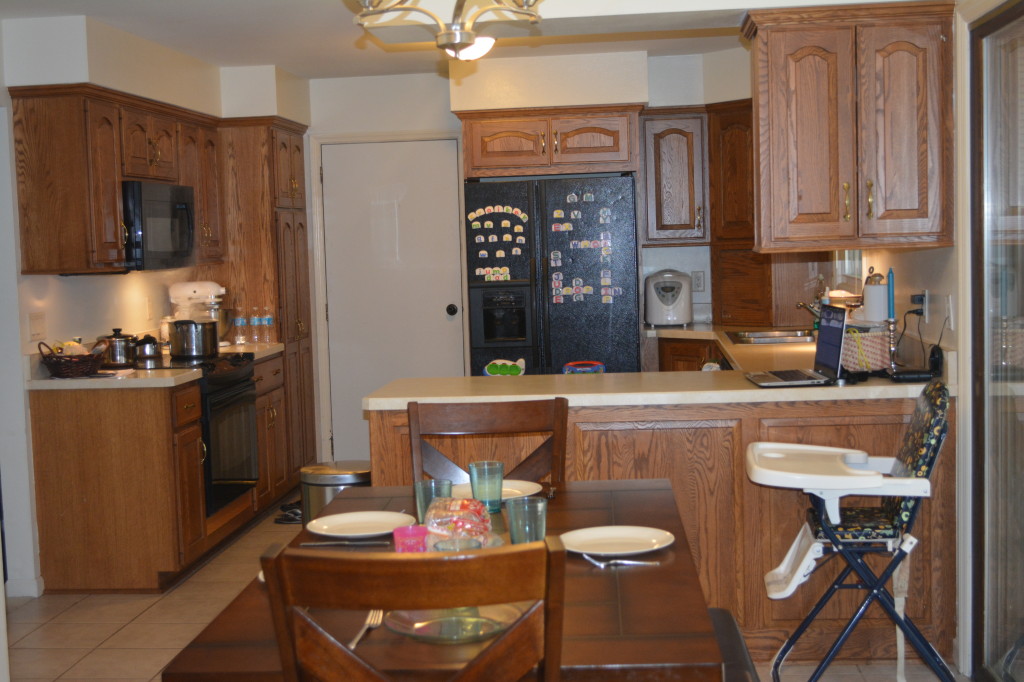 The formal living room has become a reading nook for my kids… they all fight over who gets to sit in the comfy Papasan chair… a housewarming gift from my husband’s aunt and cousin. The white walls of a rental home drive me a little crazy, as I’m used to painting the walls of a home in bright colors, but I’m doing my best to get some interesting things up on the walls to break up the monotony. Pretty curtains help. And soon I’ll put up canvases of the kids and our wedding. Did I mention I love pictures? 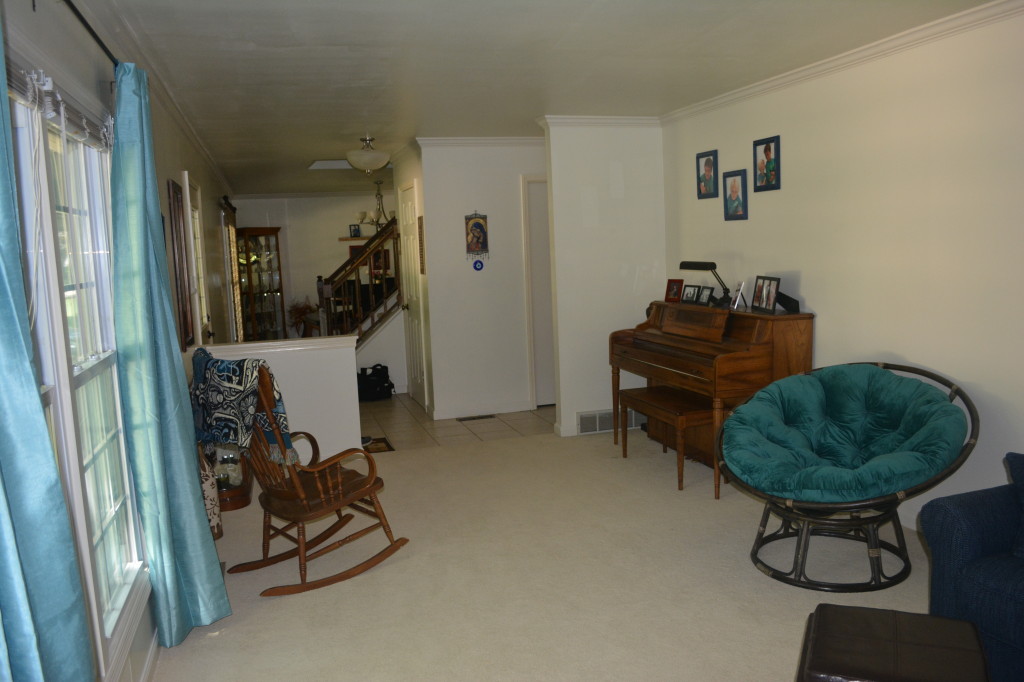 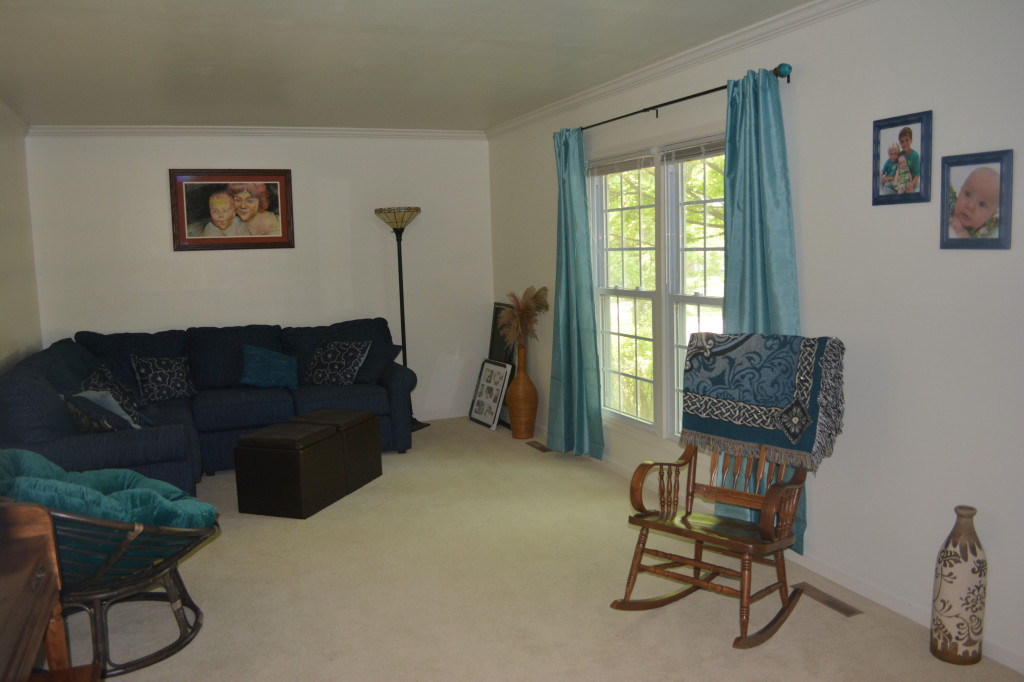 The formal dining room looked nice when I took these pictures… but presently the table is covered with papers. I guess we need to get the boxes in the basement cleaned up so we have an office area to hide all those papers! 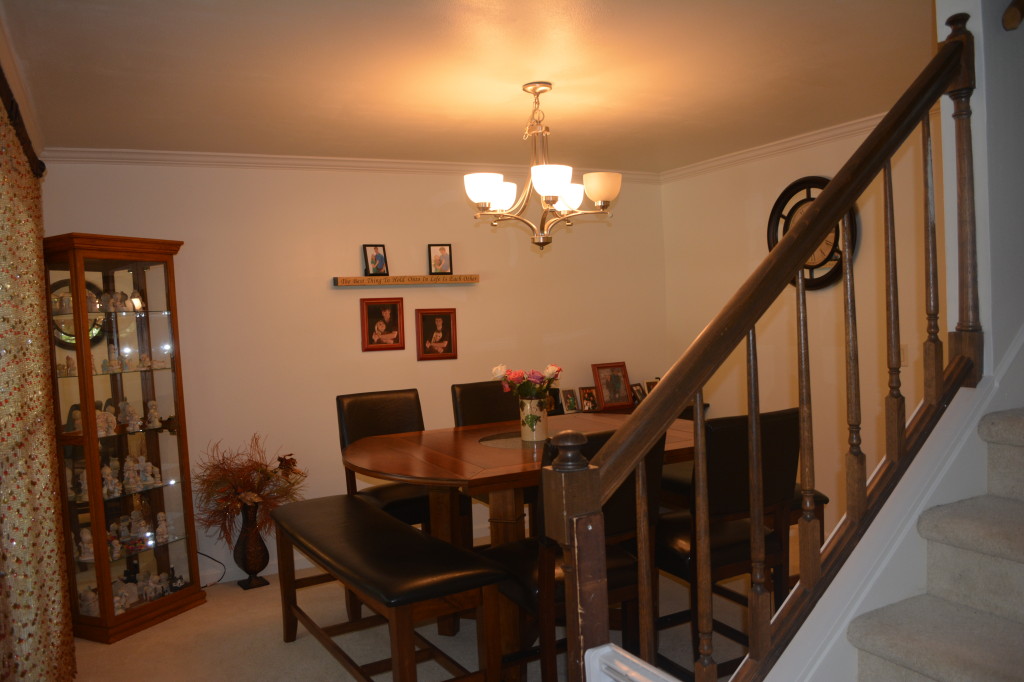 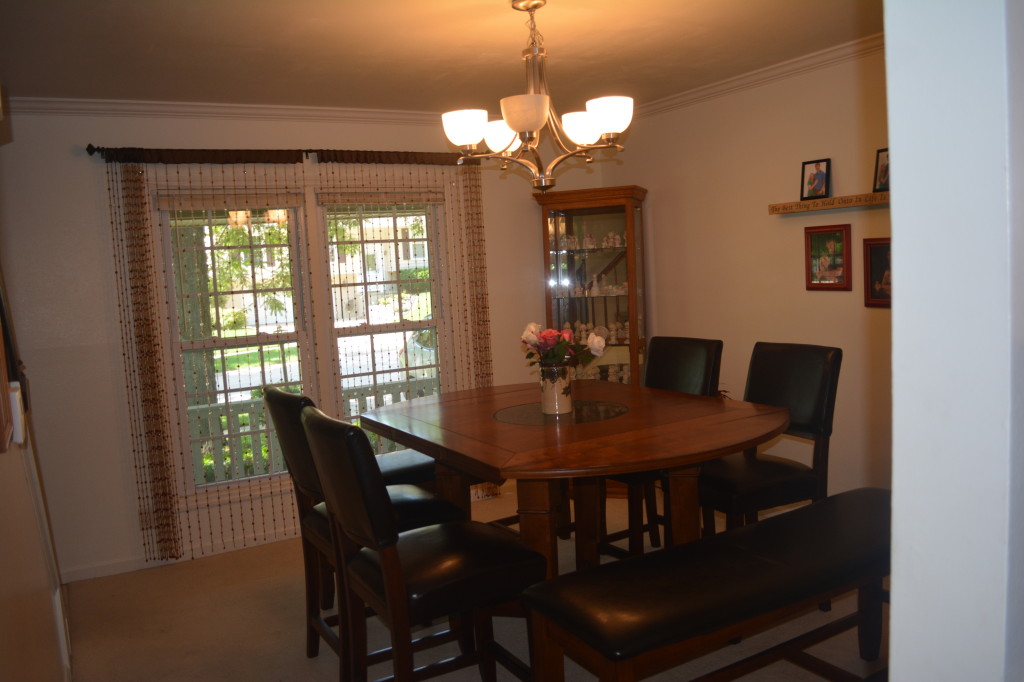 This is the master and our daughter’s room (the bedrooms I’m responsible for cleaning). My boys’ rooms did not, and will not, make it onto here. I don’t want to advertise the state their rooms are perpetually in… okay, okay… they don’t do that bad taking care of their rooms 😉 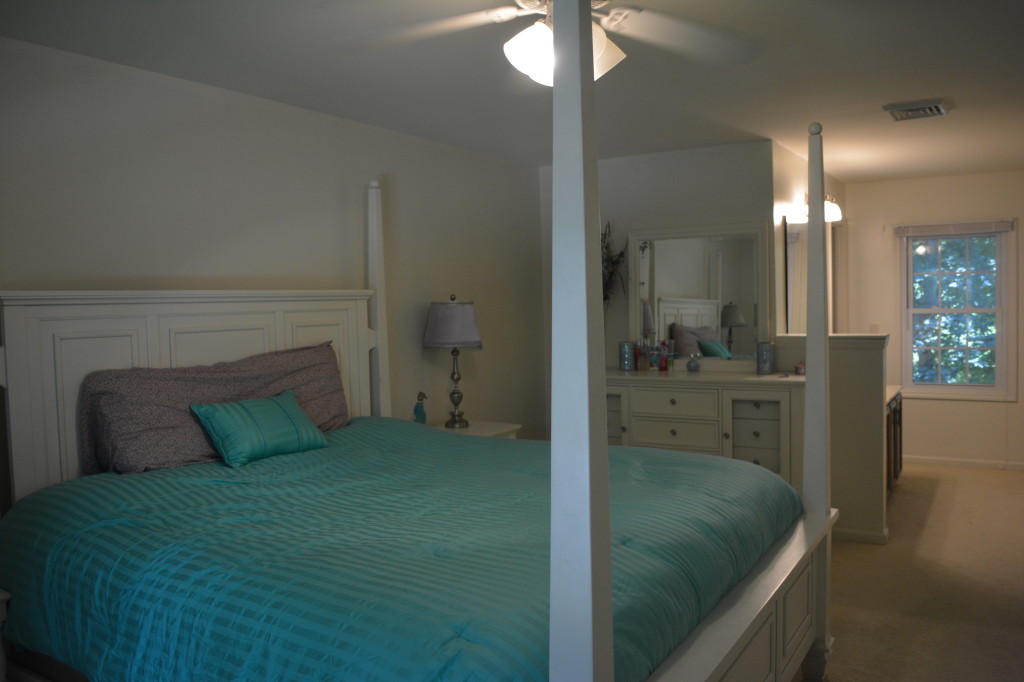 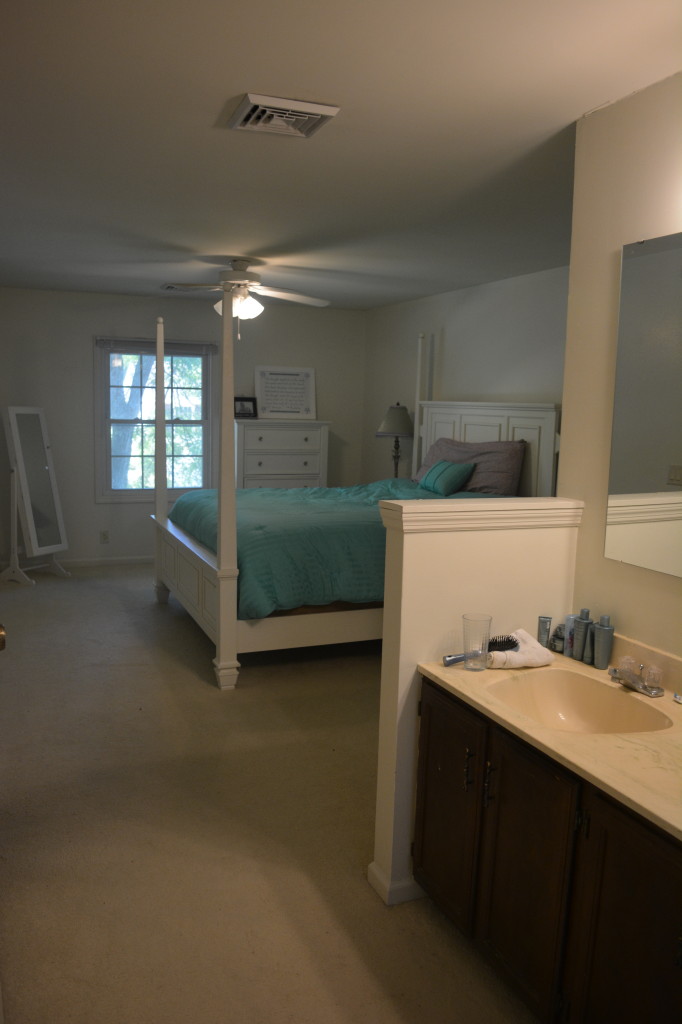 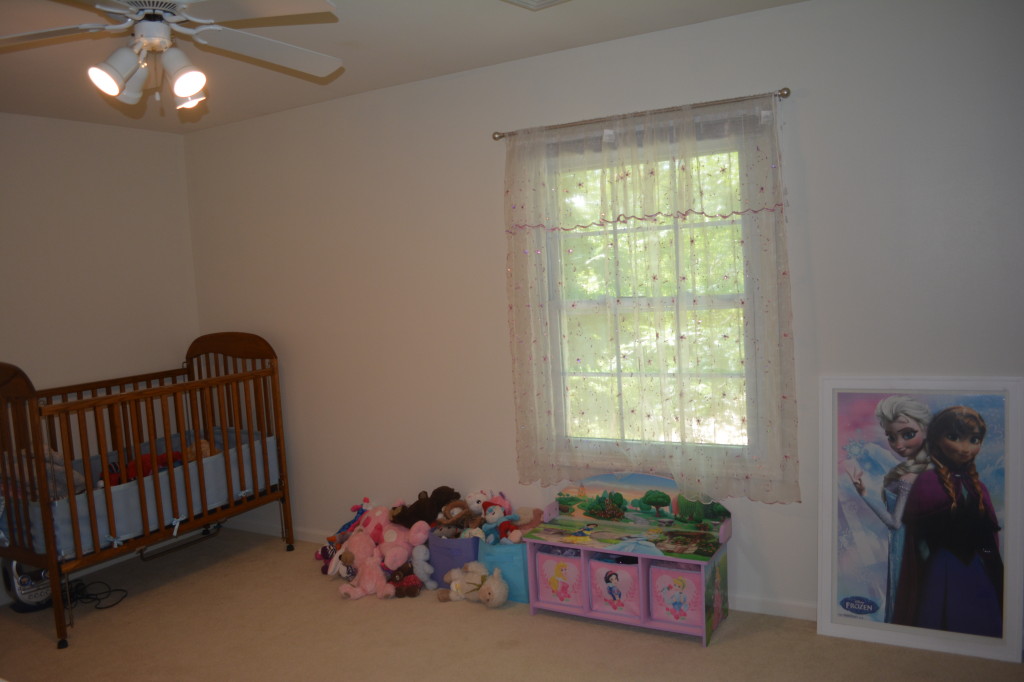 And my very very favorite part… the backyard! 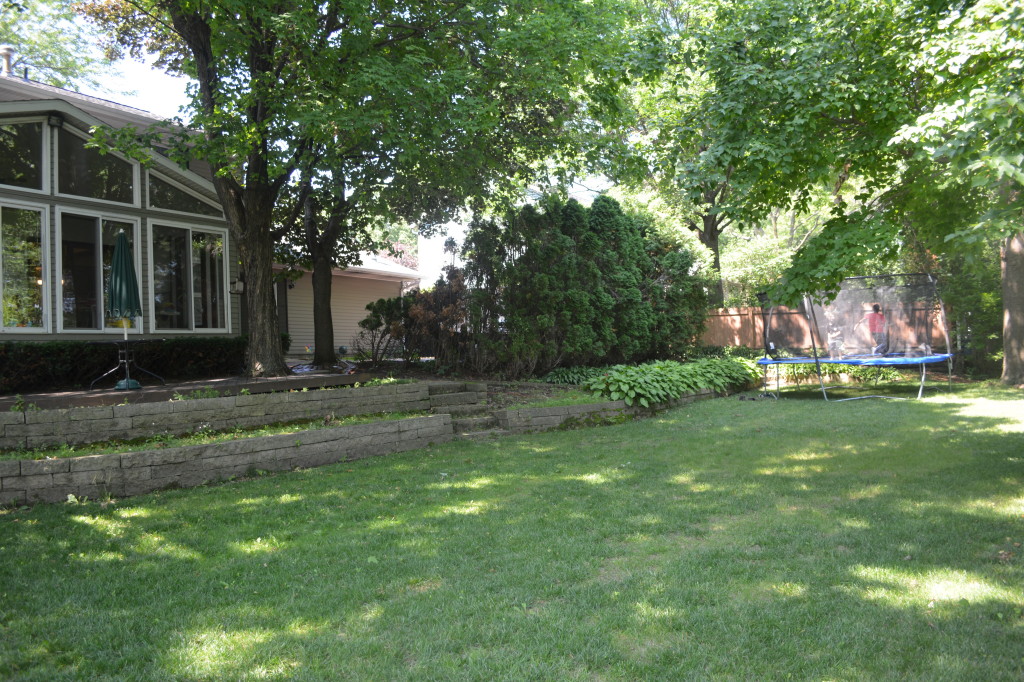 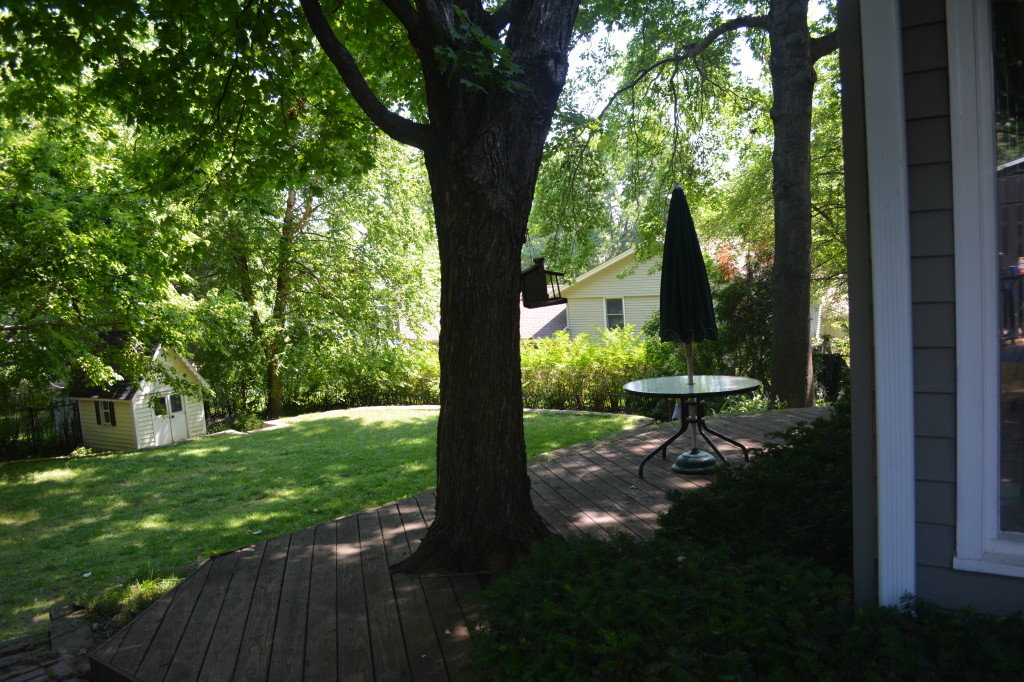 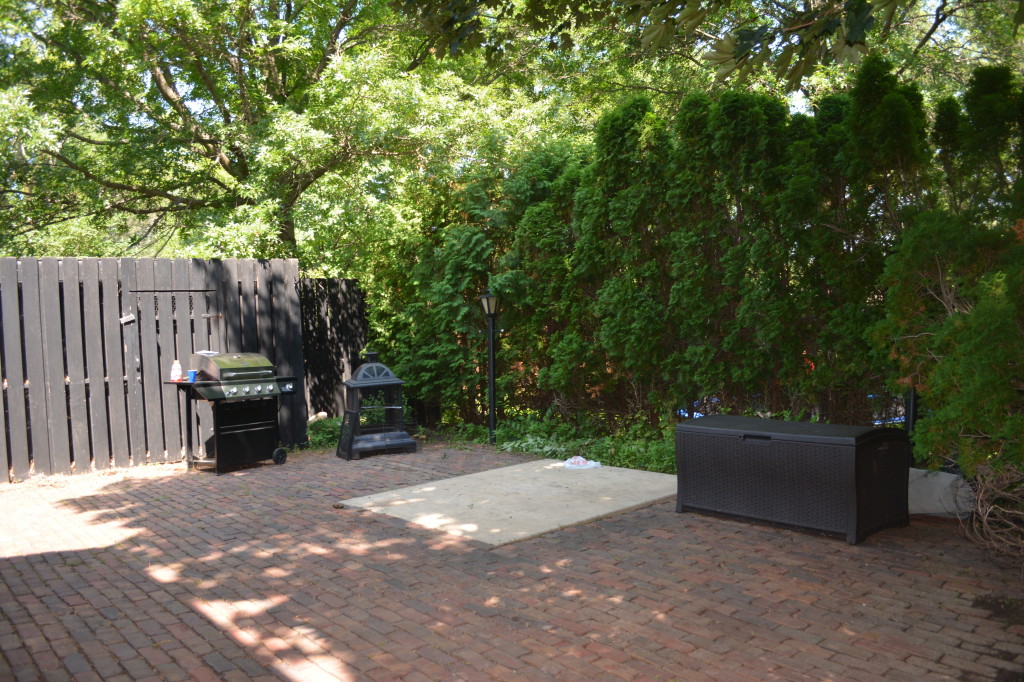 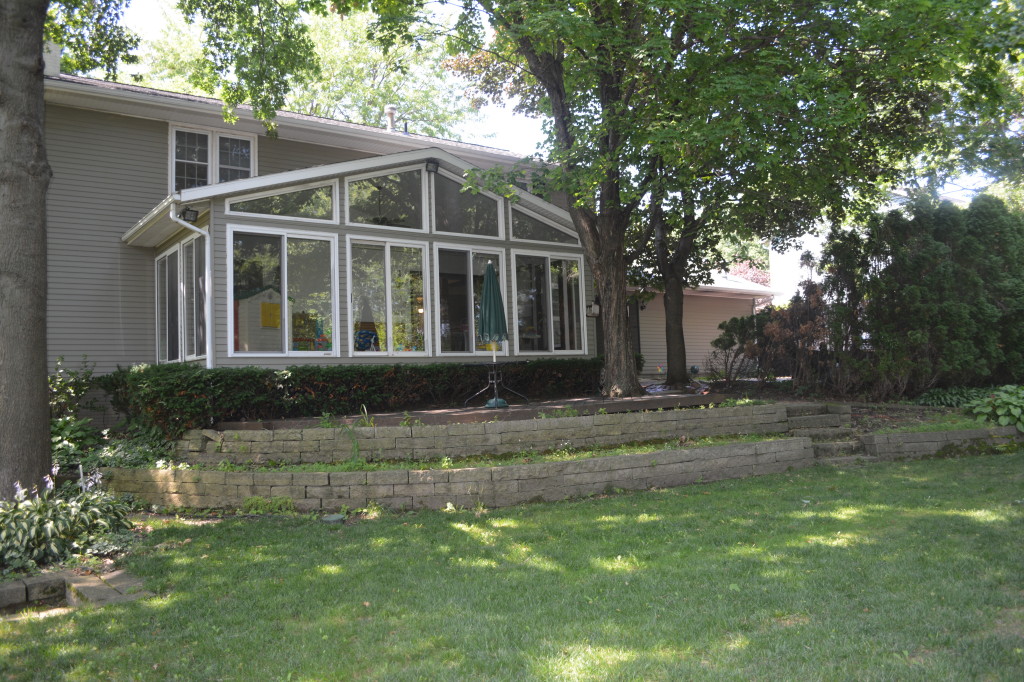 We have a lot of planning and saving to do until we make it to the mountains someday… but we are so thankful to have found such a wonderful place for our family to call home until then!